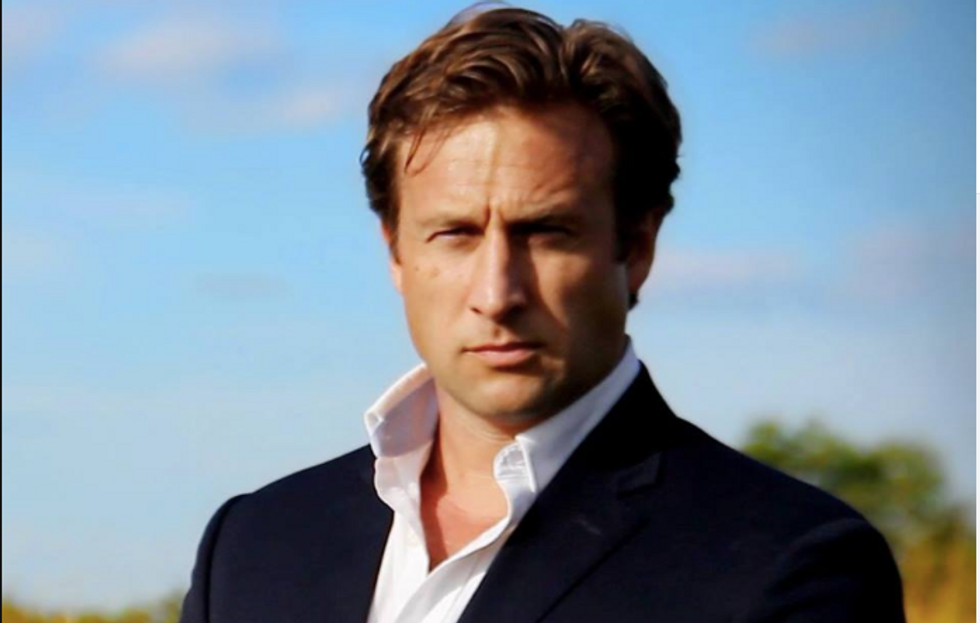 Meet Courtland Sykes. If Courtland Sykes were in a Lifetime movie, he would be a sleazy finance bro our heroine meets at the beginning whom she inexplicably finds charming, and who later becomes super obsessed with her and murders her quirky suspicious friend with peanuts (suspicious friends all have peanut allergies and are quirky, it's a Lifetime rule) and then attempts to trap her in his basement lair with the last five other women who tried to leave him, all of whom are now corpses in bridal gowns, and force her to love him.

I can also see him in a B-movie situation where he is the head of a mysterious company that is turning people into zombie super soldiers.

In real life, he is a douchebag who is running for the US Senate from the Great State of Missouri. Behold, his campaign ad, replete with atomic bombs and somehow not a disappointing Saturday Night Live parody:

I do not use the term "douchebag" lightly here. Recently, in response to a question of whether or not he supported "women's rights," Sykes posted a missive to his Facebook wall explaining that he totally supports women's rights. That is, a woman's right to make him dinner.

“Chanel [Rion], my fiancee, has given me orders to favor these rights, so I’d better,” he said. “But Chanel knows that my obedience comes with a small price that she loves to pay anyway — I want to come home to a home-cooked dinner at six every night, one that she fixes.

“It’s exactly the kind of family dinner that I expect one day my future daughters will learn to make after they too become traditional homemakers and family wives — think Norman Rockwell here — and Gloria Steinham [sic, unless he is talking about another famous feminist who goes around wearing Scout's Ham costume from To Kill a Mockingbird all the time] be damned.”

May I just note -- Norman Rockwell was divorced once, married three times, did not regularly attend church, and both he and his wife (who had a job as a schoolteacher, by the way) had to move in order to receive psychiatric treatment. His psychologist, Erik Erikson, reportedly told him that he painted his happiness and did not live it. So yeah, even Norman Rockwell was not living that Norman Rockwell life.

Now, I am all for cooking if that is your thing. I genuinely enjoy cooking for people I love, and so do lots of other people. It's one thing if you're doing it because that's what you want to do, and another if it's because some Stanley Kowalski cafone demanding his home cooked dinner at 6 p.m. sharp. If that's what you're looking for, just go ahead and marry a damned crock pot.

Unlike all you other suckers out there, Courtland Sykes wants you to know that he "does not buy into radical feminism's crazed definition of modern womanhood" that he says they “made up to suit their own nasty snake-filled heads.” He has his own definition, thank you very much, and would like women to buy into that, instead. He thinks they will like it! In fact, he is pretty sure all the women of today think Hillary Clinton and her career-having is super gross, and that what they all really want is to be Donna Reed. (Donna Reed was also not Donna Reed IRL.) Way to be in touch with the youth of today!

Sykes then notes that he totally wants his future daughters to have nice lives, and would even be OK with them having "home-based enterprises" which I am guessing means that he will allow them to sell Jamberry on the side so long as they are still getting that dinner ready for their husband every night? That's nice of him.

One thing they will not be however is...

career obsessed banshees who forgo home life and children and the happiness of family to become nail-biting manophobic hell-bent feminist she devils who shriek from the top of a thousand tall buildings they are [SIC] think they could have leaped in a single bound — had men not been ‘suppressing them.’ It’s just nuts.