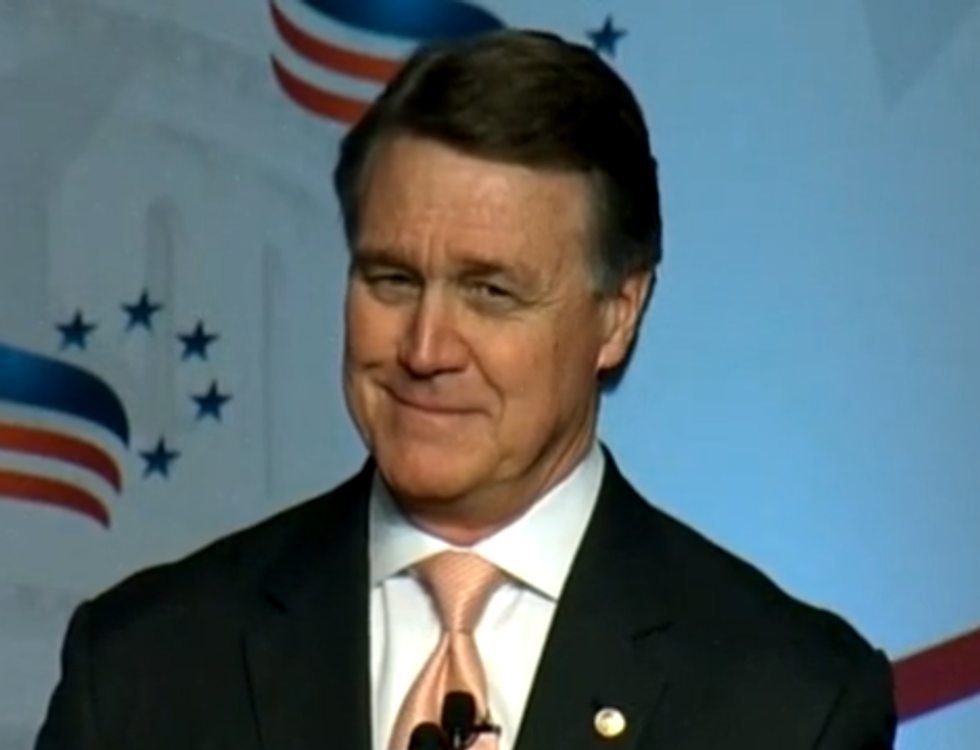 Here is yet more proof that, no matter what religion you are (assuming you are not a godless heathen!), you can probably find passages in your holy book to prop up whatever kind of pig turd asshole you want to be. Let's visit with Georgia Republican Senator David Perdue, and see what kinda Bible verses he's mainlining these days. It's a psalm! It's probably that nice one about "Yea, though I walk through the valley of the shadow of death" and all that malarkey, right? No, that is not right:

When Sen. David Perdue (R-Ga.) took the stage on Friday morning at Ralph Reed's Faith and Freedom summit, the first-term senator ... had a biblical reference ready to warm up the crowd. Yet his line was rather chilling.

Perdue ... urged the audience to pray for President Barack Obama—but he clearly did not mean to wish him well.

"We should pray like Psalm 109:8 says: Let his days be few," Perdue said with a chuckle. The crowd giggled, but psalm he cited wasn't talking about the end of a presidential term and it doesn't end there.

"The crowd giggled." What disgusting, un-Christlike shitheads. And they were giggling because there is this hilarious thing in some evangelical circles called "imprecatory prayer," wherein you are literally asking God to murder folks you don't like. It's not new. Hell, it's not new as regards President Obama, as Mother Jones points out. Way back in 2009, there was a bumper sticker that actually said, "Pray for Obama -- Psalm 109:8." In 2012, a Kansas Republican state legislator sent his jack-off buddies (allegedly) an email forward featuring what had by then become known as the "Obama prayer." But he said he just meant he didn't want Obama in office no more, nothing sinister about that!

The point is that this has been going around quite a while, so we sure hope Perdue didn't think he was being creative. Did he follow that line with the breaking news he just heard about funny internet pictures of cats saying hilarious words?

The other point is that these fuckholes need to can it with their protests that they just want Obama to not be president -- he's only going to be in office for five more seconds anyway, for Christ's sake -- and aren't actually wishing death upon him. Congregation, please turn in your Bibles to Psalm 109, starting with the OH SO FUNNY verse 8 these dicks keep quoting:

Let his days be few, And let another take his office. Let his children be fatherless. And his wife a widow.

HAHA, his children would be Malia and Sasha Obama, and his wife would be Michelle. If they were "fatherless" and "a widow," it sure sounds like these assholes want Barry dead. Just saying. Let's keep reading in our Bibles:

Let his children continually be vagabonds, and beg; Let them seek their bread[b] also from their desolate places. [...] Let there be none to extend mercy to him, Nor let there be any to favor his fatherless children.

And that would be Malia and Sasha, as vagabonds, begging, because their dad is dead. Hey, Malia Obama graduates high school today! Does David Perdue want her to struggle in homelessness for the rest of her life, along with her sister, just because David Perdue's puckered redneck asshole has a sad about the black president?

Or is there an even creepier verse that comes after that?

Let his posterity be cut off, And in the generation following let their name be blotted out.

Wow, what a fucked prayer this is! So if this is really the "Obama prayer," that part sounds like they're praying for Malia and Sasha to die too, or at least to be struck barren, which is a happy thought. Not that they'd EVER suggest such a thing!

Honest question: Is it possible that many Christian conservatives, like David Perdue, are real fuckin' stupid when it comes to knowing what's in their goddamned Bibles, and that's why we have this situation where they're all (LOL!) accidentally praying for the Obama kids to die? Haha, just kidding, that was not an honest question, it was a rhetorical one, because OF COURSE THEY ARE THAT STUPID. We are actually being charitable and suggesting that MAYBE David Perdue gets the bulk of his Bible study via email forwards, and not from the actual Bible.

Or maybe he really is an unhinged fuck who prays for people to die all the time, how can we even begin to tell the difference when it comes to these rabid puke-fucks?