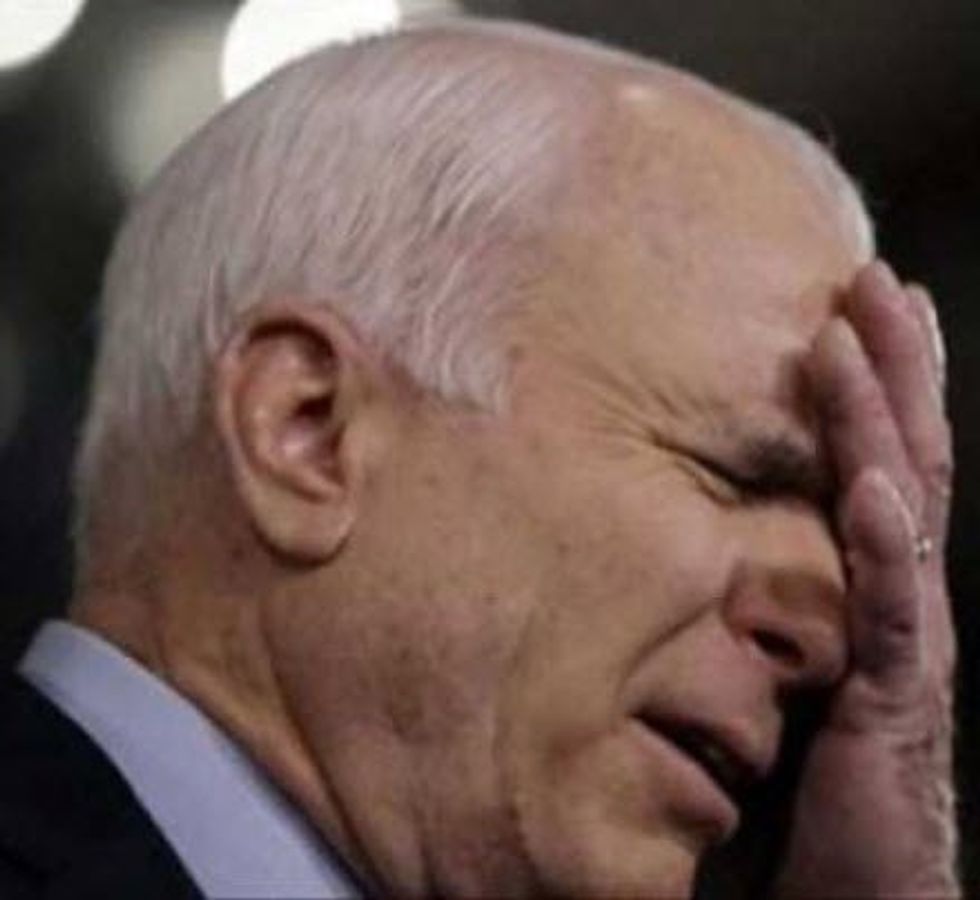 It's not the tumor that hurts. It's the stupid.

Here's a new spin on why John McCain voted against the "skinny repeal" of Obamacare two weeks back: Wisconsin Republican Senator Ron Johnson speculated that maybe the late hour, or McCain's brain tumor, caused him to vote against a plan that would have stripped 16 million Americans of health care and led to the collapse of the individual market. Really, who can tell with old people? They do weird stuff sometimes.

The 'skinny repeal' is every bit as awful as all the other attempts to kill Obamacare. Who'd have guessed?

Johnson said the only reason to pass the "skinny repeal" was to move the process on to a conference committee with the House, because surely then they'd fix all of healthcare (they wouldn't have) and Paul Ryan had promised the House wouldn't just pass the skinny repeal (he hadn't), so Johnson simply couldn't see why McCain would have voted against the bill. Musta been bad brains or an old guy being tired, like they do:

Again, I'm not gonna speak for John McCain -- he has a brain tumor right now -- that vote occurred at 1:30 in the morning, some of that might have factored in.

One of the hosts was obviously taken aback that Johnson would Go There: "Really? I mean, he did just [...] had recovered from getting the brain tumor removed and then flew all the way to Washington DC, but do you really think that played a factor in his judgement call?" Johnson wasn't going to insist he knew what was broken in McCain's brain, but it sure was surprising, so let's just get the Brain Tumor Theory out there, you know?

Again, I-I-I don't know exactly what -- we really thought -- and again I don't want speak for any senator. I really thought John was going to vote yes to send that to conference at 10:30 at night. By about 1, 1:30, he voted no. So you have talk to John in terms what was on his mind.

Like maybe a big BRAIN TUMOR was on his mind. It's pretty telling that a Republican would think brain damage -- or at least crippling fatigue -- was the most obvious reason for another Republican to have taken such an inexplicable vote. Why wouldn't you want to destroy a sixth of the economy without any guarantee of a replacement, you nut? You aren't catching empathy just because you're dying, are you?

Not that we think McCain was overcome by any sudden attack of empathy, either. He still wants to kill the ACA; he just wants to kill it through a more stately, traditional process, so it ain't so unseemly.

Yr Wonkette is supported by reader contributions. Please click the "Donate" clicky, because we care. We really do.