GOP: The Only Person To Replace Scalia Should Be The Reanimated Corpse Of Scalia 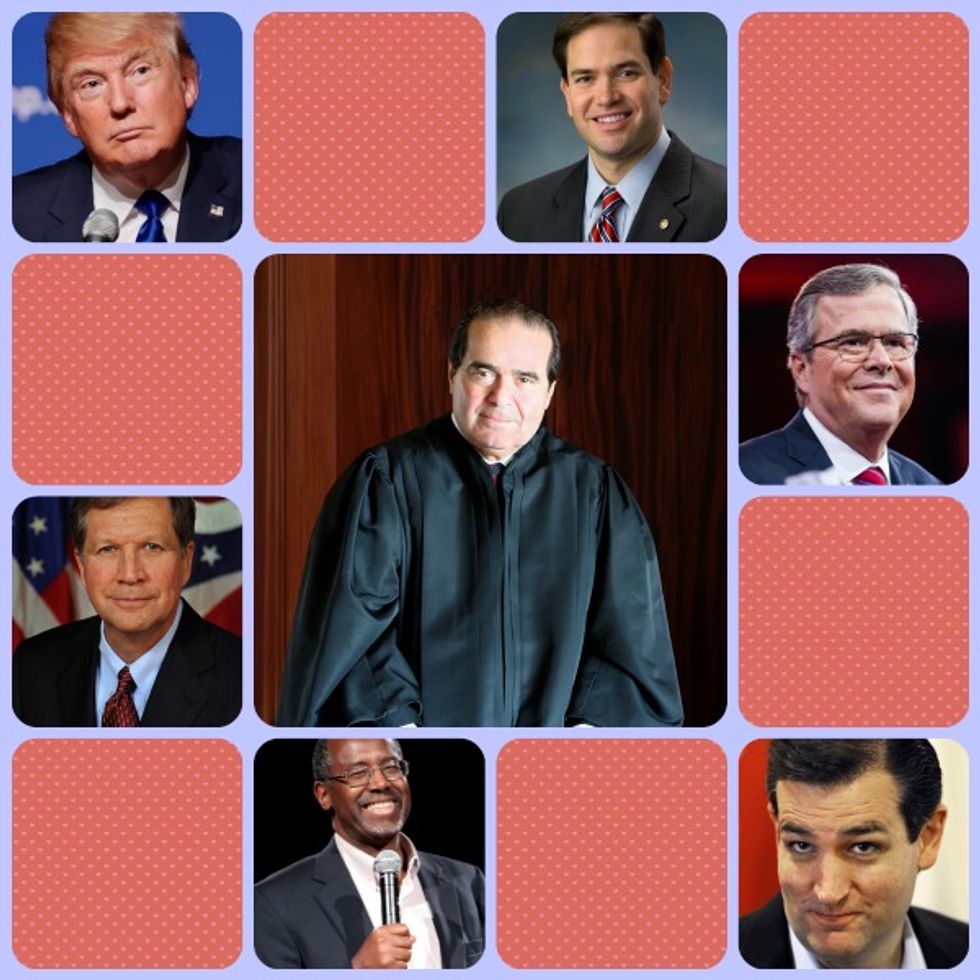 love at first, last, and every sight

After Antonin Scalia shocked the world by abruptly dying in his sleep some time Friday night, your namby-pamby liberal Twitter feeds and Gchats and your texts and probably your Tinder messages exploded with a mixture of (1) "Good. Fuck that guy." (2) "HOLY CRAP WHAT ABOUT [pick whichever SCOTUS case you were most worried about this term]." (3) "I feel sorry for Notorious RBG, because she did love him dearly." If you were a conservative jackhole, however, and you happened to work for, say, conservative jackhole Sen. Mike Lee, you probably rushed to your keyboard to pound out a chest-thumping demand that the Senate simply refuse to engage in its constitutional duty of advice and consent.

On a scale of one to actually coming while typing, where do you think Conn Carroll was at as he banged that out? Edging, maybe?

The woman who never stopped reminding us she was a lawyer, a thing that should terrify anyone who ever has any contact with the judicial system ever, wrote a brief Twitter eulogy for her beloved, but failed to get his name right.

Because God hates or loves us -- we can't tell which, most days -- there was of course a GOP debate already scheduled for just a few hours after the news hit. This gave us an opportunity to see six GOPers, all of whom are constitutional legends in their own minds, develop new and interesting theories about the Supreme Court nomination process. John Kasich, the theoretically most reasonable one in the race, declared that President Obama shouldn't appoint anyone unless he can appoint someone universally beloved by Republicans, basically.

I really wish the president would think about not nominating somebody. If you were to nominate somebody, let's have him pick somebody that's going to have unanimous approval, and such wide spread approval across the country that this could happen without a lot of recrimination. I don't think that's going to happen, and I would like the President just to for once here put the country first. [...]

And, so I believe the President should not move forward, and I think that we ought to let the next President of the United States decide who is going to run that Supreme Court with a vote by the people.

Hmmm. Weird. See, we assumed that the people of these here United States had already decided who they wanted to be appoint SCOTUS justices for the period spanning Jan. 20, 2009, through Jan. 19, 2017, and that person is named Barack Obama.

Donald Trump, who was (terrifyingly) the person who made the most sense during the debate, admitted that if he were in Bamz's shoes, he'd totally nominate someone ASAP. Of course, then things got terrifying again when he listed Bill Pryor as one of his top choices. Who is Bill Pryor, you ask?

During the hearing, Pryor's comments on Roe v. Wade (he called it "the worst abomination in the history of constitutional law) and a high court decision on an Alabama death penalty case ("Issue should not be decided by nine octogenarian lawyers who happen to sit on the Supreme Court," Pryor said) drew the ire of Democrats.

Yes, you read that right. Donald Trump would pick the dude who hates Roe, which is a given, but also who hates pretty much the entire idea of a Supreme Court being the final stop, judgment-wise. Great.

Noted constitutional scholar Ben Carson woke up from his nap to explain that the real problem is that we have lifetime appointments, and if only people would just die younger, we wouldn't have such an issue here now would we?

The fact of the matter is the Supreme Court, obviously, is a very important part of our governmental system. And, when our constitution was put in place, the average age of death was under 50, and therefore the whole concept of lifetime appointments for Supreme Court judges, and federal judges was not considered to be a big deal.

Obviously that has changed, and it's something that probably needs to be looked at pretty carefully at some point.

You will be unsurprised to learn that Ted Cruz was a mendacious little bitch about the whole thing.

CRUZ: Well, we have 80 years of precedent of not confirming Supreme Court justices in an election year. And let me say, Justice Scalia...

DICKERSON: Just can I -- I'm sorry to interrupt, were any appointed in an election year or is that just there were 80 years...

CRUZ: Eighty years of not confirming. For example, LBJ nominated Abe Fortas. Fortas did not get confirmed. He was defeated.

DICKERSON: But Kennedy was confirmed in '88.

DICKERSON: He was appointed in '87.

CRUZ: He was appointed in...

DICKERSON: ... confirmed in '88. That's the question, is it appointing or confirming, what's the difference?

CRUZ: In this case it's both. But if I could answer the question...

DICKERSON: Sorry, I just want to get the facts straight for the audience. But I apologize.

Yes, that is CBS moderator John Dickerson goddamn apologizing to Ted Cruz for having the temerity to point out that Cruz was just stone cold wrong. But yeah, mainstream media is totally in the tank for Obama, et cetera.

Ted Cruz being Ted Cruz, he had to continue being awful all the way into Sunday morning teevee shows, declaring that he would filibuster any Obama nominee. If you had the misfortune to watch a good deal of Sunday morning television, you also saw bow-tied smirk machine Tucker Carlson hosting Newt Gingrich so that Newt could explain "the historic precedents are in the last year of the presidential term, that there's a bias towards the next president, with the votes of the American people picking that person," (lolwhut?) and Hugh Hewitt showing up to explain that blocking a vote for any nominee whatsoever was uh-huh totally fair because of Robert Bork.

People, can we have some real talk about Bork? Like, can we get into some Real Nerd Shit right here? Even though Saint Ronnie appointed him, Robert Bork didn't get confirmed because Robert Bork was a nightmare horror show who was so awful that six Republicans crossed the aisle to vote against him. Robert Bork didn't get confirmed because he was the person who carried out the Saturday Night Massacre and fired an independent prosecutor at noted crook Richard Nixon's behest. While he was an appellate judge, Bork made clear that he didn't really believe there was a right to privacy, particularly where icky gay people were concerned. He liked fucking poll taxes. POLL TAXES. He was a monster and deserved not to be confirmed. Also too, the Senate turned around and confirmed ego-hound Anthony Kennedy right after that, so shut up about Democrats being obstructionist, you fucking babies.

If Obama decides to appoint, say, Bill Ayers, you can semi-credibly gibber about his tarnished past and how that isn't what 'Merica wants or needs. That won't happen because you know Barry is gonna nominate a nice centrist like Sri Srinivasan, a pick so moderate that he (a) once represented Enron's Jeffrey Skilling and (b) got confirmed for his DC Circuit Court of Appeals job by a Senate vote of 97-0.

But somehow by April or so, Srinivasan will be Bill Ayers 2.0 and Ted Cruz will get up and read Green Eggs and Ham for 12 hours again and why oh why won't Canada make its borders more porous and just let us all go there already so we don't have to go through this? Haven't we suffered enough?