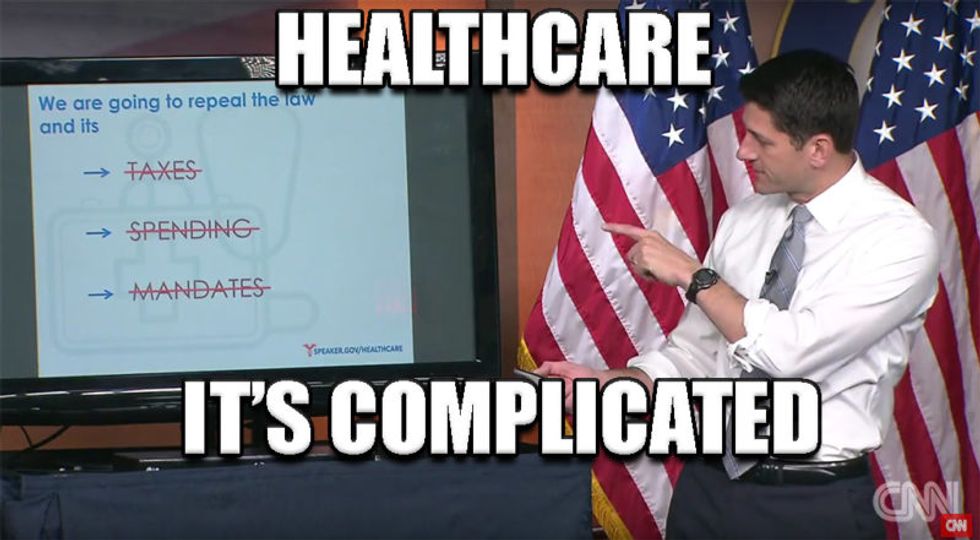 Oh, golly, the whole damned GOP was so excited about the prospect of killing off Obamacare (and a bunch of poor people) in a flurry of last-minute, badly-conceived legislation before the reconciliation deadline of September 30 that all the Republicans just plum forgot to reauthorize funding for the Children's Health Insurance Program (CHIP), which also expired last night at midnight. That's kind of a big deal to parents of the nearly 9 million children covered by the program. The services provided by CHIP won't vanish immediately, because CHIP is a federal/state dealio, but some states don't have much cushion at all before all the money really IS gone:

Should CHIP expire, most states have enough funding to maintain the program for a few months. But ten states would run out of funding by the end of the year and Minnesota would run out by the end of October. According to an analysis by the Center on Budget and Policy Priorities, “When their federal funding runs out, states with separate CHIP programs (rather than CHIP-funded Medicaid expansions for children) may be forced to impose enrollment caps or freezes, or shut their programs entirely.”

Even in states which wouldn't have to constrict CHIP services right away, the longer Congress takes to pass reauthorization, the more costly and nasty things would get, should the delay take long enough that programs would face shutdowns:

States would have to start shifting costs to cover administrative tasks necessary for ending the program, such as sending parents notices in the mail. And the lack of assurance that the program will exist in the future makes it impossible for states to budget and plan. Basically, states would have to focus on a variety of things completely unrelated to the program’s intent of expanding access to and improving children’s health care.

Why Don't These Rude People With Disabilities Just Let Graham-Cassidy Kill Them Quietly?

As it turns out, Utah Republican Orrin Hatch and Oregon Democrat Ron Wyden actually did introduce a bill in the Senate to reauthorize CHIP for five years, but it got set aside in the Senate's mad rush to kill the ACA. If you're a fan of bitter ironies, consider this one: while Hatch was devoting all his attention to trying to push the Graham-Cassidy Obamacare repeal through -- including that Finance Committee meeting where he told people with severe disabilities to shut up and stop protesting -- the state of Utah filed paperwork notifying the federal Centers for Medicare and Medicaid Services (CMS) that if funding weren't approved by October 1, the state would prepare to “eliminate eligibility or services” under CHIP. Utah estimated it has enough funds to run CHIP programs through December, but it wanted to be ready.

You might think that while the Senate was busy farting around with its death fantasies for the ACA, maybe the House could have gotten the ball rolling for reauthorizing CHIP, which despite Rs' hatred of health spending, is still a popular thing with both parties. Where was Paul Ryan and his great mastery of legislation? Damned if we know! Probably sitting around not wanting to look like they were "undermining" Graham-Cassidy by working on CHIP, whose funding mechanisms might have been screwed over if Graham-Cassidy passed? We see that the House will take up a CHIP bill next week, maybe, and the Senate is hoping to get something passed sometime in the next two or three weeks.

The last time CHIP was up for reauthorization, in 2015, there were some squabbles about the details, but Congress managed to pass the reauthorization five months before the program expired, no after-the-last-minute farting around necessary. You'd think that sometime in the last eight months, Congress could have maybe passed this thing that everyone outside the House Freedom Caucus likes. Parents of kids who rely on CHIP shouldn't panic just yet -- it's almost certain to pass, unless of course some genius decides to add a rider repealing Obamacare, banning abortion, and retroactively stripping Barack Obama and Hillary Clinton of citizenship.

Yr Wonkette is supported by reader contributions. Please CLICK HERE to help us keep our own chips covered, with salsa.