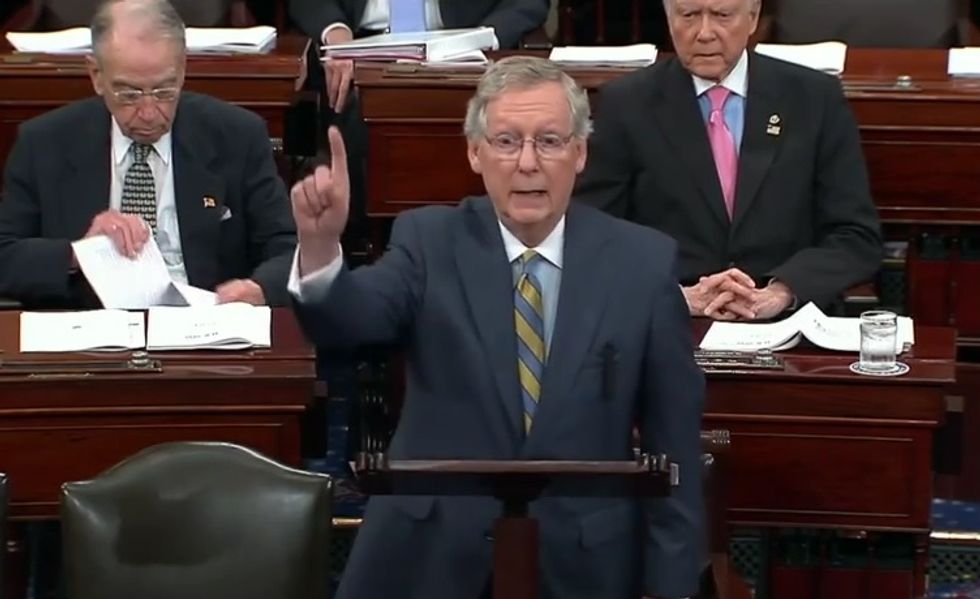 The last time we wrote specifically about the topic of the Republicans in Congress passing legislation to protect special counsel Robert Mueller's investigation, our headline was "GOP Will Protect Robert Mueller The Second It’s Too Fucking Late To Protect Robert Mueller." At that time, facing news that Donald Trump had indeed already tried to fire Mueller in the past, all the Republicans in the Senate and in the House were conscientiously jamming their thumbs up their asses and saying, "It's no big deal, Trump's not gonna do that, stop being such a Nervous Nellie about everything!"

Of course, to bring a bill to the Senate floor to actually protect the Mueller investigation, Mitch McConnell's sign-off is required, but unfortunately the Senate majority leader is too busy making out with turtle assholes to allow that, because #reasons, even though the Senate Judiciary Committee is planning to take a look at just such a bill TOMORROW:

“I don’t think he should fire Mueller, and I don’t think he’s going to,” the Kentucky Republican said. “So, this is a piece of legislation that’s not necessary in my judgement.”

“I’m the one who decides what we take to the floor. That’s my responsibility as the majority leader. We’ll not be having this on the floor of the Senate,” McConnell said during a Fox News interview.

"I don't think I'm GOING to have a car accident, so I guess I will not call Flo the Progressive lady."

"I don't think I'm GOING to break my dick off in a turtle-fucking accident, so I guess I will not get health insurance, FUCK YOU OBAMACARE."

Senator Thom Tillis, God bless him just this one time, had been TRYING. After spending a whole lotta months with his name on a bipartisan bill to protect Mueller, but not doing fuck-all about it, Tillis suddenly was visited by an angel of the Lord, who said unto him, "Oh shit, dude, the fate of the Republic is on the line, so can you please do something?" Tillis had started actively lobbying for his bill with Democratic Senator Chris Coons, which had been merged with legislation cosponsored by senators Lindsey Graham and Cory Booker, to FUCKIN' MOVE on it and get it to the floor. And his response to senators being all namby pamby like "PSHAW, Trump won't try to fire Mueller," or complaining that it was UNFAIR! he was being mean to Trump, was essentially "shove it up your ass":

Tillis doesn't think Trump will ultimately fire Mueller even as the president rages over the expanding Russia probe. But he has an impassioned response for his conservative critics nonetheless: "Spare me."

“Courage is when you know you’re going to do something that’s going to anger your base,” Tillis said in an interview in his Senate office.

“The same people who would criticize me for filing this bill would be absolutely angry if I wasn’t pounding the table for this bill if we were dealing with Hillary Clinton,” he argued. “So spare me your righteous indignation.”

Mommy, Daddy, look! It is a Republican with a backbone, and he's riding a unicorn with Santa Claus! Don't see that very often, do we?

But nah, let's not protect the republic. Mitch McConnell is over here trying to preserve what little hope he has left that the GOP will keep the Senate after November, and he wouldn't want any of the low-information heathen shitrockets who make up the GOP base mad in advance of the midterms by allowing a vote on legislation to protect our American institutions and the rule of law. Better to let a lawless authoritarian thug continue to run roughshod over our democracy, because McConnell has to keep his TURTLE POWER!

If ever a man was called upon to go fuck himself, Mitch McConnell is that man.

Oh yeah, and this non-entity too.