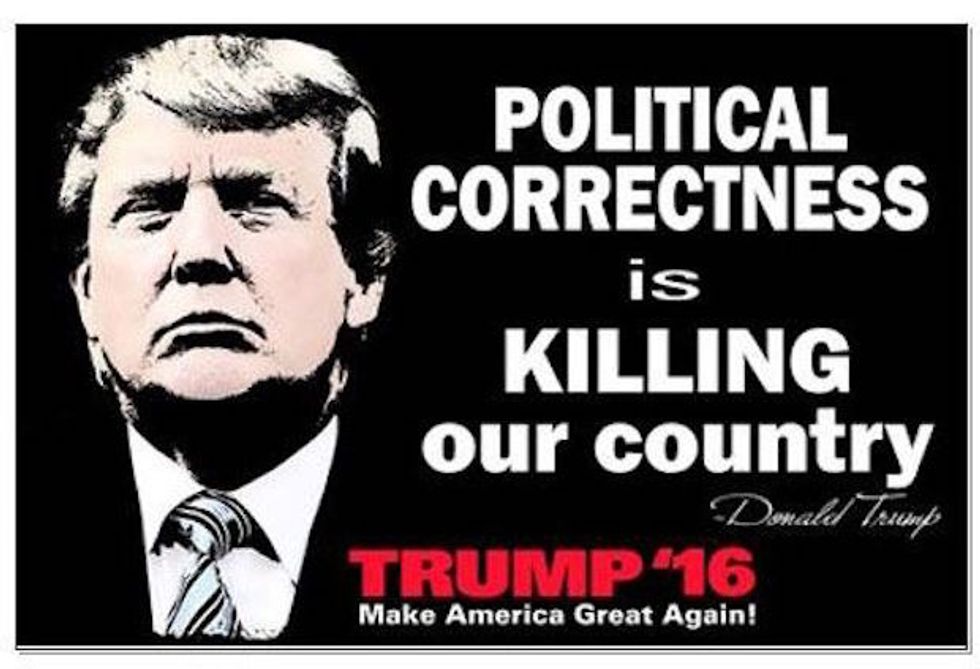 If there is one thing Republicans really hate, it is political correctness! "Why," they ask, "must I care about other people's feelings? How is that fair? If this were truly a free country, everyone would think it was awesome when I use racial slurs and be legally required to laugh very hard at all of my super awesome rape jokes!" They are sick and tired of people creating "safe spaces" where they are less likely to get their feelings hurt or experience racism, sexism, homophobia, transphobia or other kinds of bigotry instead of being cool and just dealing with that shit. Oh, how they pine for the days when you could just go around insulting people, and those people would thank you for being so good at expressing your freedom of speech! Daily, they cry that said free speech is being taken away by people being offended by the things they say, and insisting it is terribly unfair for them to ever have to think about or consider anyone's feelings.

However, this all changes when their feelings are the feelings that are being hurt, and nothing hurts Republican feelings like being called a RACIST. In fact, the traditional wisdom among many conservatives is that being called a racist is approximately 6.12 billion times worse than actually saying or doing a racist thing to begin with. Why? Because the sort of people who say racist things are generally incapable of empathy, and thus cannot possibly fathom that anything they could say could hurt someone as much as being called a racist hurts them.

Thus, they are trying to push some more "politically correct" terms for "racist" in order to protect the delicate feelings of said racists.

Per essemple! Republican Senator Tim Scott of South Carolina, in response to Donald Trump's attacks on U.S. District Gonzalo Curiel, tried to explain how those comments were not "racist" but rather "racially toxic." Which is a different thing altogether!

"His comments were certainly racially toxic. I don't know the intent of his heart so I'm not going to call them racist comments but certainly they are racially toxic," Scott, a black person, told reporters on Tuesday.

Not to get all Jean-Paul Sartre on you guys, but I kind of feel as though with things like racism, existence precedes essence, no? Like, if you keep doing and saying racist things, as Trump does, what, exactly, is the difference between you and someone who is "racist in their hearts," as they are wont to say? And how can we tell? Because for some reason, every time someone gets caught doing or saying something racist, they somehow reason it out by saying "SURE, that thing I said and/or did could maybe be interpreted by pretty much anyone as being incredibly racist! But I am not racist in my heart, so it totally does not count!" Apparently, you can get away with saying and doing some pretty terrible things if you are only racist with your mouth and not your heart or other organs. It is very convenient, considering the fact that there is literally no way to prove what is in someone's heart other than through their actions, and if their actions don't count, then we could all be perfect in our own hearts. Heck, in my own heart, as far as anyone knows, I could be Liza Minnelli!

Anyway, onto example number two! Remember Delta County GOP Chairwoman Linda Sorenson from last week? The lady who posted an objectively racist meme on her Facebook? A meme so racist that her co-chairpeople were all "OH, for someone broke into the Facebook and put it there just to make her look bad?

YES! That one! Well, as it turns out, she's not racist, she's just "racially insensitive." According to Colorado GOP Chairman Steve House, Sorenson cannot possibly be racist, because she endorsed a black guy named Darryl for the Senate primary. Because, obviously, no one can possibly be racist if they have, at any point in their lives, liked a black person. Sorenson's comments just mean she needs the NAACP to come talk to her and tell her that people will think she is a racist if she keeps saying black people look like monkeys!

“If you label somebody’s who’s a racist who’s not, then all you do is create an environment where you have discontent and more stress,” he said. “Republican or Democrat, decades of racism in this country and racial divide and an inability to educate and move ourselves forward is a real problem that we’ve got to solve. This situation gives us the ability to work with the NAACP and other groups out there and say, ‘All right, we’re not as racially sensitive about some things as you are, so let’s do some education.”

Yes, obviously Linda Sorenson just made it all the way to middle age without ever hearing once in her whole life that it is pretty racist to compare a black person to an ape! How? No one knows. Maybe she lived her whole life in an underground bunker awaiting the apocalypse? Maybe it is the NAACP's fault for not providing Linda Sorenson with a list of things that are 100 percent definitely racist? All this house guy knows is that if people call her racist for posting a meme comparing comparing President Obama to a chimpanzee, then it is just going to cause discontent and stress. Unlike, say, comparing a black person to a chimpanzee, which could only produce harmony and bliss for everyone involved.

Linda, for her part, simply cannot believe the intolerance that has been directed at her simply for being "racially insensitive":

The vitriol and hatred that has been directed at me has been nothing short of stunning. But anyone paying attention these days knows that the left is only about tolerance when they are demanding that YOU tolerate their latest nutty idea, and if you don’t like it, then you’re automatically a ‘hater,’ a ‘bigot,’ and a ‘racist.’

Yes, Linda and her fellow "racially insensitive" Americans only want us to extend to them the same kindness and compassion that we extend to others, while being understanding and tolerant of the fact that they cannot extend that to anyone else. Because they suffer from Racial Sensitivity Deficiency Syndrome. All they ask is that the next time you see them post a meme comparing a black person to a chimpanzee, saying a judge can't do his job because he's Mexican, defending a football team named for a racial slur, getting all sad about how unfair it is that Black people have BET and all white people have is literally every other channel, or declaring their intent to vote for a person who thinks Mexican judges can't do their job and that all the Mexican immigrants are criminals and rapists -- to please use a more politically correct term than "racist" or "bigot" to describe their actions. Otherwise, their feelings could get hurt.