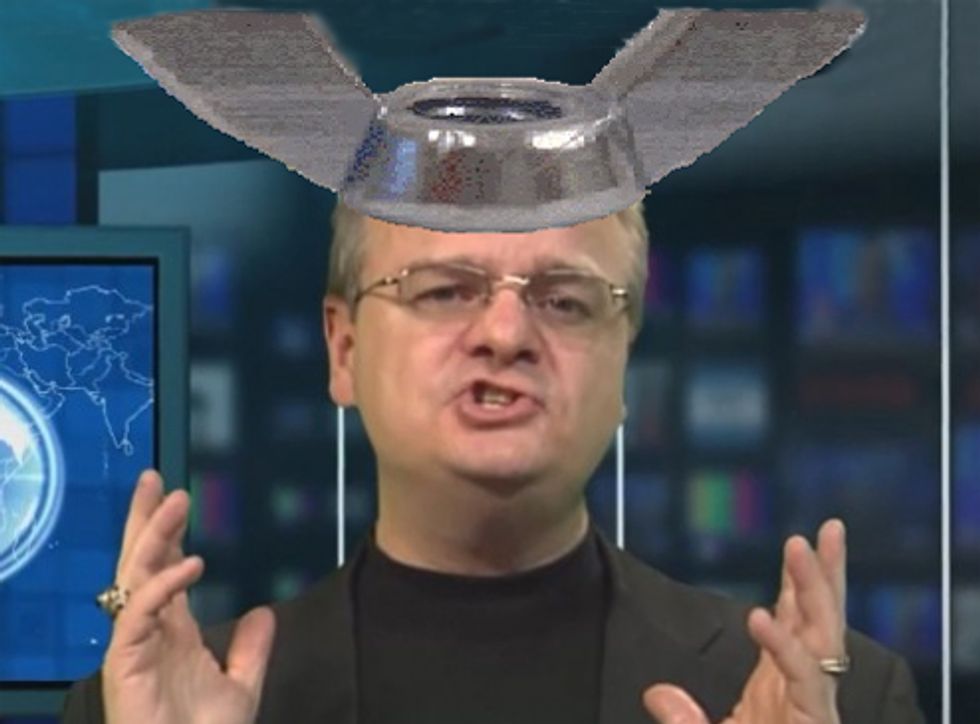 Yes, former "presidential candidate" Ruth Bryant White and her trilby-sporting husband "Professor Steve" stopped by "Pray In Jesus Name" to talk about how gay marriage is not a civil right because "they're bringing their dirty laundry and bedroom stuff to the people."

After [White] asserted that "God destroyed Sodom and Gomorrah because of the homosexuality" and that the Bible says that gays are consumed by "the lusts of the flesh," Klingenschmitt declared that the difference between gay marriage and interracial marriages like the Whites' is that "homosexuality is based on lust, which God forbids as a sin, but your marriage is based on love, which God commands between one man and one woman."

"They're using it, saying that homosexuality is a civil right," Ruth White declared. "There is nothing civil about it in any way shape, form or fashion. And even if it was a civil right, God's word take precedence over anything that man's law can do ... Now we've got Christians who were living a straight life now that are going back into the homosexual lifestyle. That's a lust, that's a demon ... They put that over God and His word? And they're will to burn for eternity for that?"

Yes, they surely seem like reasonable people! Who absolutely do not appear to realize that the vast majority of opposition to interracial marriage was from Christians who thought God would not be into it! Like, oh, Bob Jones University which asserted right up through the year 2000 that it was their right to ban interracial dating at their school.

I am, however, terribly confused by how gay people bring their "dirty laundry and bedroom stuff to the people" in a way that heterosexual people do not. Does she mean that when she finds out that someone is gay married, she is forced to imagine them having sex, and that this is unpleasant for her? Because, if we are playing that game, there is literally no one on that show that I would particularly enjoy imagining in the throes of ecstasy. Quite frankly, I am still reeling from that time Gordon Klingenschmitt forced us all to imagine how bad Madonna wanted to seduce him.

Being a curious person, I looked up Ms. Ruth Bryant White on the interwebs, and it turns out that she has her own Roku channel called "Bears & Lords!" According to the GoFundMe for this channel (which I will be checking out just as soon as I locate my remote), the channel will be producing a sitcom called "WINNERS" that will include "Celebrity Guest Stars, such as Gladys Knight, International Fashion Model Le Jeune Bryant and others."

I looked up that Le Jeune guy and I am about 90% sure he is a relation of some kind. Totally sure Gladys Knight is gonna be on her sitcom though! Probably right after she and I have lunch next Saturday and she decides to make me an honorary Pip. Which actually does seem more likely than her being on that lady's sitcom, because I do have all of those moves down.

And it's a good thing too! Because now is the time on "Pray In Jesus Name" when we DANCE! And also guess what "Professor Steve" is a professor of! Go!