Gov. Nikki Haley Not Entirely Sure Why Y'all Gotta Be Such Bigots 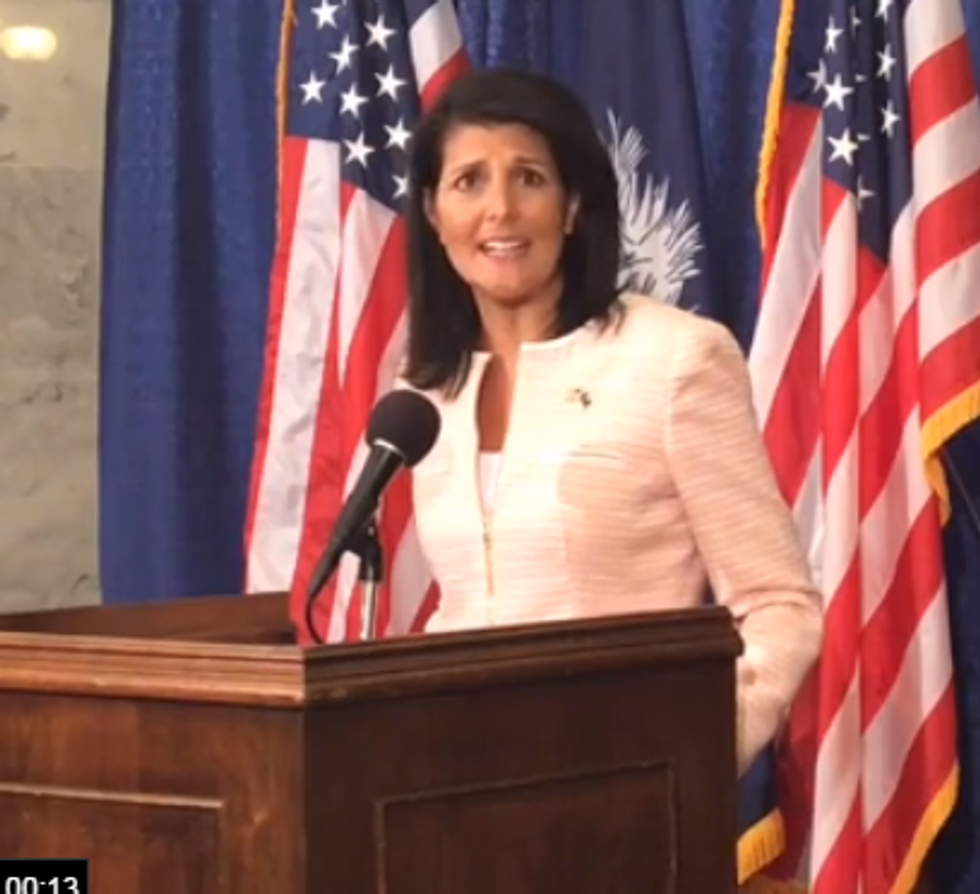 A moment of clarity.

It is a day in America, which means it's time to tell you about some new bullshit anti-LGBT legislation. Republican state Senator Lee Bright of South Carolina has introduced a bill (S. 1203) to make sure none of those big scary transgender monster demons are allowed to make potty in the correct bathrooms, because many Republicans are pussies who are scared that big men in dresses are going to sneak into the bathroom to molest THEIR WIVES AND DAUGHTERS. Boring! Heard all about these bills!

But there is a Good News in this story! South Carolina Gov. Nikki Haley, who is a wingnut but is not always DSM-V level insane, is not quite sure what's up Sen. Bright's ass, but she knows it's not transgender people, as she splained to reporters:

I don't believe it's necessary, because I think if you look at everything that we've had happen, I mean, there's not one instance that I'm aware of. I look at South Carolina and we are ... a state where we don't have to mandate respect and kindness. [...] We're not hearing any news of religious liberty violations or anything else so I think we're in good standing there.

A reporter asked her to clarify, is she talking about religious liberty violations or problems with transgenders doing dastardly dookies? Haley replied:

Either. There are not instances, y'all haven't reported on anything, I haven't heard anything that's come to my office. So when I look at South Carolina ... we're not hearing of anybody's religious liberties that have been violated, and we're again not hearing of any citizens that feel like they're being violated in terms of freedoms. And so ... like it or not, South Carolina is doing really well when it comes to respect and when it comes to kindness and when it comes to acceptance. And for people who imply that it's not, I beg to differ. I think 2015 was a great example.

Haley is obviously talking about how South Carolina led the nation and she ended racism forever when she called for the removal of the Confederate battle flag from the state capitol after the Charleston murders. SUCH RESPECT, MANY KINDNESS!

And Gov. Haley is correct in saying that there are literally no real problems with people's religious freedoms being violated, or transgenders doing the dirty naughties to people in public restrooms. (For more on that, check out Jessica Williams's muyexcellent report from "The Daily Show.")

But why is Gov. Haley being so goddamned normal and human about this, when so many other Republican governors are not? The answer ($$$$) might ($$$$) surprise you ($$$$).

No, we are not saying that the Transgender Brigade (probably a thing) is paying Haley bribe money to let them continue with their nefarious plans to destroy America, one bathroom stall at a time. (UNLESS THEY ARE.) We are saying that a solid handful of Republican governors have shown that they are not complete morons, and that they actually value the businesses that allow their states to have nice things like tax revenue.

[wonkbar]<a href="http://wonkette.com/600124/north-carolina-governor-suffering-extreme-case-of-butthurt-please-send-butt-medicine"></a>[/wonkbar]On the other hand, some Republican governors really ARE that dumb. Hi, Mississippi Gov. Phil Bryant! Hey gurl, North Carolina Gov. Pat McCrory! And as always, we reserve a special place in our hearts for Indiana Gov. Mike Pence, who proudly proclaimed that he signed an antigay religious freedom bill he didn't even fucking understand. Mike Pence is a very stupid man.

But credit where credit is due: Not all Republicans are chickenfucking stupidheads, at least on this issue! And the cherry on top is watching religious right heads explode because they're being BETRAYED!!1!!!111! by people they thought were their friends.

[The State viaFreedom For All Americans]