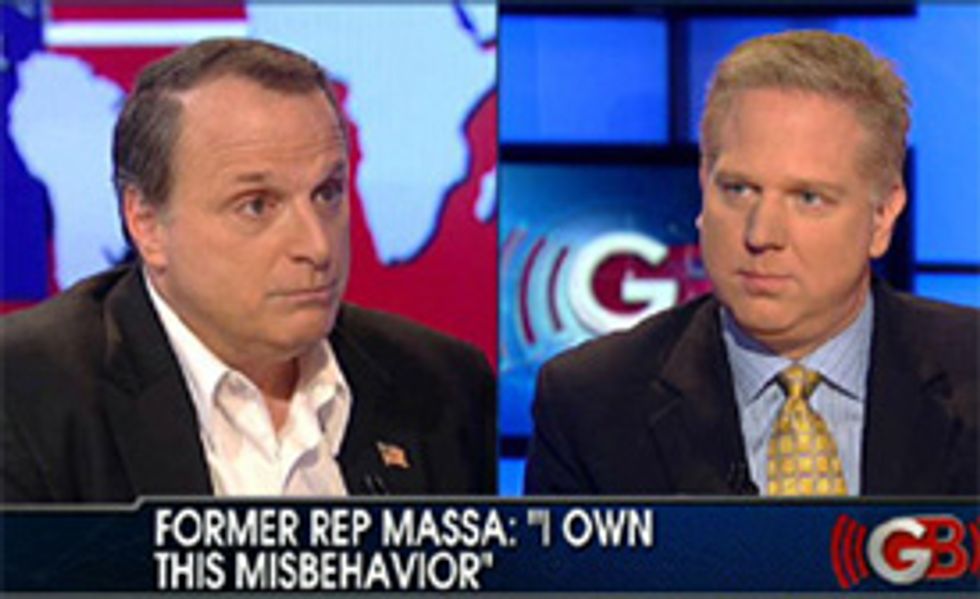 Remember the great Congressman Eric Massa? The disgusting grope-y Democrat resigned last month because everybody finally got tired of him trying to hump every man he saw. Massa's brief time in Congress was basically an endless attempt to fuck young dudes, mostly his own staffers forced to live with him in a Washington townhouse. Hisentire congressional existence was dedicated to getting male staffers alone with him in a hotel room, so he could grope them and beg for sex. But this is not even the most disgusting thing about Eric Massa, because lots of sad old fat slobs beg youngsters for sexytime and plenty of awful bosses sexually harass their employees. No, the foulest part of this tale involves a dead American soldier.

The Washington Post has already won the 2010 Pulitzer for this lewd, shocking tale of lewdness:

The incident that eventually lead to Massa's resignation occurred at a funeral reception on Feb. 2 in Hornel, N.Y., for Lance Cpl. Zack Smith. The 19-year-old Marine had died in an explosion in Afghanistan. Massa struck up a conversation with a young bartender serving at the informal wake.

Four days later, a local blogger alerted the congressman's office that someone had posted an anonymous comment on his site accusing Massa of soliciting sex from the bartender, according to an e-mail obtained by The Post.

[Massa's cheif of staff Joe] Racalto said he also received a voicemail message from the bartender asking why Massa wanted to meet him in Buffalo, 85 miles away, for dinner. Racalto said he confronted Massa, and the congressman said he was trying to give the man a law school reference. "Mr. Racalto told the Congressman he did not believe him, and informed the Congressman that he was going to report his conduct," Racalto's lawyer wrote. Racalto, snowbound in New York, said he called Hikel in Washington, and the two discussed the need to alert House leaders.

Way to honor the dead troops, asshole. Ugh, congratulations, Eric Massa: You were even too fucking gross for the House of Representatives. [Washington Post]