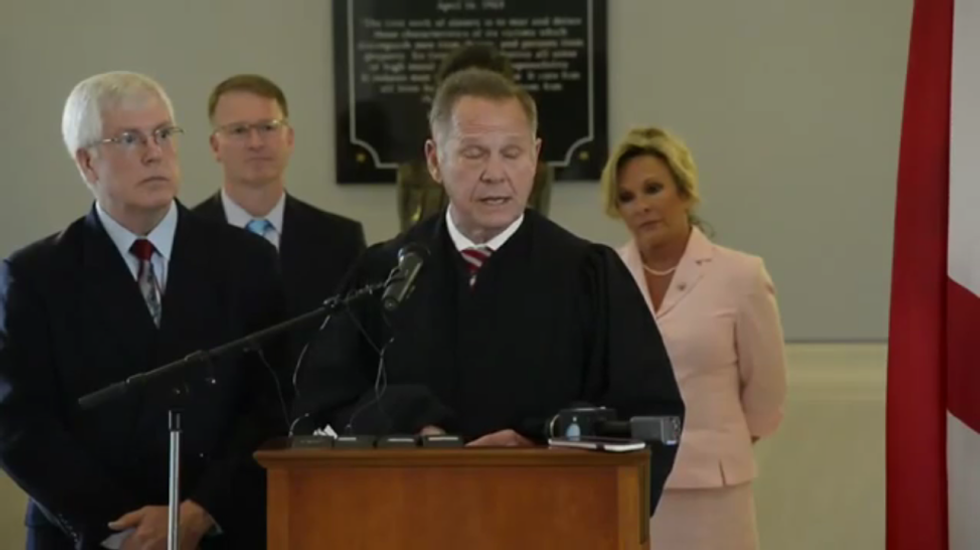 Don't let him near your daughter, just to be safe.

We are just going to open this post by letting you know that Roy Moore is actually fundraising off the allegations that he's a child molester. Yes, that is what a piece of shit he is:

"The Obama-Clinton Machine's liberal media lapdogs just launched the most vicious and nasty round of attacks against me I've EVER faced," Moore wrote in the fundraising email. "I won't to get into the details of their filthy and sleazy attacks."

Yeah, wouldn't want to tell your followers you allegedly bad-touched a middle schooler, would you? That might distract them from OBAMA-CLINTON LIBERAL MACHINE, which is doing spiritual warfare to beloved and pure Christian warrior Roy Moore, we guess. Anyway, please send money! (Haha, we tricked you, that link is to US!)

Sadly, his die-hard supporters will buy it, because the sort of conservative evangelical who thinks of Roy Moore as a decent human being is a degraded creature with a fucked moral compass that views every single thing as right vs. left, and anybody who says something bad about one of their own is FAKE NEWS, even if what they're saying is that their boy Roy Moore is a child molester, and even when there's one woman on record, Leigh Corfman, saying he sexually assaulted her when she was 14 -- after picking her up outside a custody hearing, where her parents were battling over custody of her, because she was a child -- and three other women on record saying he was generally just an old fucking creep who perved on them when they were teenagers. You know how women are, always lying and saying Roy Moore molested them when they were 14.

This is really how they are. They'd rather take the chance that their guy is a kid-toucher, because at least he's THEIR kid-toucher and not a ... shudders ... DEMOCRAT! That is how much Fox News has brainwashed them.

On that note, let's take a look-see at what some of Alabama's finest GOP elected officials have to say about the Roy Moore allegations! We already told you about state auditor Jim Ziegler, who says it's no big deal because the Bible says Mary was a young teenager and Joseph was an older guy and all of that turned out OK because have you met my lord and savior Jesus Christ? Of course, Ziegler is a fucking idiot who apparently missed the entire point of the story, which is that Joseph DID NOT FUCK MARY. God did! His holiness came all over her in a dream! That's why she is known as the "Virgin Mary" instead of the "Has Sex Sometimes Mary."

Daniel Dale of the Toronto Star ventured into the hinterlands to find out how Alabama GOP figures feel about the Moore allegations. SURPRISE, they think bitches be lyin'! Wonkette recommends you never let any of the following men babysit your young daughters.

Here, have some tweets from Dale:

Old Jerry doesn't like child molesting, he just ranks it above voting for Democrats.

Wait, so it doesn't count unless Moore was able to successfully finish molesting the child and besides it was a long time ago and besides bitches be lyin'? Thanks, dirty Uncle David! Oh wait, he has more to say:

Parents of 16-year-old girls, please pause to consider how you'd feel if a 32-year-old man showed up to take your daughter a-courtin' in the Alabammy moonlight at his house in the woods. Which one of your shotguns would you brandish in that situation?

Yeah, the allegations came from WOMEN. It's not like they came from REGULAR PEOPLE.

And yew know about 'dem DEMONCRATS! They run abortion factories and want to let transgenders to share a bathroom with YOUR WIVES AND DAUGHTERS! Would he let Roy Moore take his young daughter to the bathroom? We are just asking.

OTHER THAN THE CHILD MOLESTING, it's not that big a deal. It's not like he did it violently! Also LOL, 14-year-old girls are dumb.

These are literal actual elected officials, saying these words out loud. God knows what they say and do in private. (No, we mean that literally. GOD KNOWS.)

You want one more? Here is Alabama state Rep. Ed Henry, who has thoughts about who is allowed to be a victim of sexual assault and who isn't. You'll be shocked to learn that Leigh Corfman, who was, again 14 GODDAMN YEARS OLD, does not meet Henry's qualifications:

“If they believe this man is predatory, they are guilty of allowing him to exist for 40 years. I think someone should prosecute and go after them. You can’t be a victim 40 years later, in my opinion,” Henry said. [...]

“I’m not buying it,” Henry said. “It’s too easy for someone to make these accusations. It’s foolish to go down that road, it’s like what if a frog had wings, he wouldn’t bump his ass every time he jumps.”

It's just TOO EASY. It's like what if a frog had wings, he wouldn't bump his WHAT THE FUCK ARE YOU TALKING ABOUT, YOU INBRED WHITE TRASH REDNECK?

Wonkette needs to take a moment to breathe in and breathe out for a few minutes, so here is Mitt Romney, having a soul and believing women and telling Roy Moore to GTFO of this race and go straight to hell: