Guess Who Else Figured Out Our President Is A Total Patsy?! 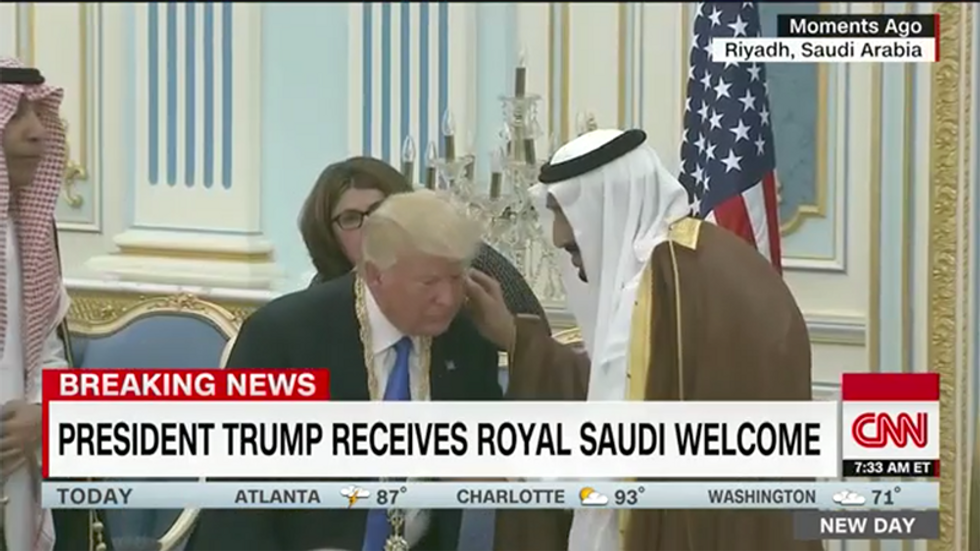 Say what you will about the Saudis, but those guys can spot a patsy! So they invited Donald Trump to Riyadh last month, put his face up in lights, let him touch the glowing orb, and even rubbed his distended belly. PROBABLY.

And while their special friend is still lying on his back with his paws up, the Saudis are taking advantage of his narcissistic stupor to get in a few punches on the annoying kid next door.

So someone hired a Russian hacker to plant a fake news story about the Qatari ruler criticizing his Arab allies and praising Iran and Israel. After which Saudi Arabia and its sidekicks in Bahrain, Egypt and the United Arab Emirates retaliated by cutting off relations with their tiny neighbor Qatar. All “my friend, King Salman” had to do was whisper Radical Islamic Terrorism in Trump's ear, and the idiot was off and running to fetch that wet tennis ball. He even took credit for the blockade that caused a run on supermarkets in Qatar, which relies on imports for 90% of its food. Because Donald Trump is a GENIUS.

At the same time, Secretary of State Rex Tillerson, who is not an actual moron, frantically tried to signal to Middle Eastern allies that the United States is NOT down for a wider regional conflict, pleaseandthankyou. And he hopes the Qatari royal family doesn't think we're taking sides here, since the Qataris just built us a $1 billion air base, and the US has 10,000 troops on the ground in their country. Sure, the Qataris sponsor Hamas and the Saudis fund Wahhabist madrasas. But that's no reason we can't all get along, right? Would God have buried all that oil in the Middle East if he wanted a war there? I think not!

We call for calm and thoughtful dialogue with clear expectations and accountability among the parties in order to strengthen relationships. We ask that there be no further escalation by the parties in the region...

We’re seeing shortages of food, families are being forcibly separated, and children pulled out of school - we believe these are unintended consequences, especially during this holy month of Ramadan, but they can be addressed immediately.

But Donald Trump doesn't do calm and thoughtful dialogue. That's not really his bag, baby. So a mere 90 minutes after his Secretary of State gave a speech advising everyone in the Middle East to calm the fuck down, Donald Trump was at a lectern in the Rose Garden claiming that he and Rex Tillerson had planned the whole thing while they were at that Gulf Cooperation Council meeting last month.

The nation of Qatar, unfortunately, has historically been a funder of terrorism at a very high level. And in the wake of that conference, nations came together and spoke to me about confronting Qatar over its behavior. So we had a decision to make. Do we take the easy road, or do we finally take a hard but necessary action? We have to stop the funding of terrorism. I decided, along with Secretary of State Rex Tillerson, our great generals and military people, the time has come to call on Qatar to end its funding - they have to end that funding - and its extremist ideology in terms of funding.

Because if you want to pick off a regional rival, all you have to do is let the American president think it's HIS IDEA! Which it wasn't. Per Bloomberg:

Trump’s account that he was consulted before the Saudi-led move against Qatar contradicted the narrative offered by the State Department earlier in the week. State Department spokeswoman Heather Nauert said that U.A.E. notified the U.S. about the plan shortly before it went into effect.

Whatever! Donald Trump doesn't care what you do over there, just as long as he gets the credit.

Meanwhile, the Qatari ambassador was desperately trying to reach the American president via Twitter.

And the White House flacks went into heavy spin mode. First they distributed a memo of Trump's speech side-by-side with Tillerson's to show that they were exactly the same. No dueling banjos here!

Then they talked about how great it is that the Trump team is attacking terrorism from all sides. It's a beautiful duet! Po-TAY-to, po-TAH-to. Per the New York Times,

But on Qatar, a senior adviser to Mr. Tillerson, R.C. Hammond, suggested a difference in emphasis — if not ultimate goal — between the two men.

“The president is focused on ending terrorism; the secretary is focused on diplomacy that will return G.C.C. focus to fighting terrorism,” he said, referring to the Gulf Cooperation Council, a loose association of mostly Sunni Arab states.

Or maybe it's all an elaborate game of Good Cop, Bad Cop. Captain Donnie softens 'em up by acting all crazy, then smoothtalking Officer Rex comes in and seals the deal?

LOLOLOL! Nope, just the usual shitshow. Here's one poor bastard from Trumpland trying to square it with the Washington Post last night.

A senior administration official, speaking after Trump’s comments, acknowledged a difference in “tone” with Tillerson. “But I think the policy is consistent,” said the official, who spoke on the condition of anonymity to explain the apparent discrepancy.

Trump does not oppose easing the blockade — although he did not mention it — but “he does believe that [Qatar] deserves it,” the official said. If the Persian Gulf states and Egypt “want to keep the pressure on” in terms of canceling flights with Qatar and “pulling ambassadors . . . [Trump] is okay with that.”

“Tillerson may initially have had a view, then the president has his view, and obviously the president’s view prevails,” the official said.

Riiiiight. Donald Trump can certainly find Qatar on a map. He definitely knew we had 10,000 troops on the ground there. We are not getting played by one tribal monarch trying to take out another. Of course we are NOT governed by an idiot who would destabilize the entire Middle East because someone threw him a party. What a ridiculous suggestion!