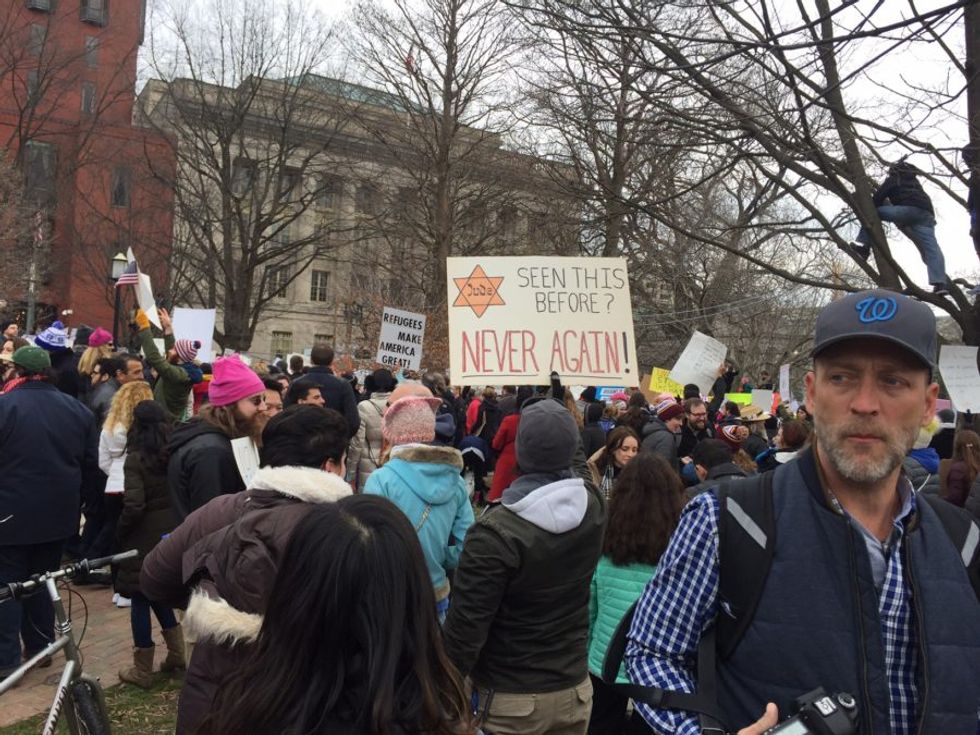 Pic in Washington DC Sunday by your compatriot 'LipTherapy'

A guest post from your comrade in wonkery 'Foulmouthed Midwesterner.'

Greetings Wonkers, from deep behind enemy lines in the struggle to resist "President" Donald Trump's latest sop to his base of misunderstood white people. You know, the ones whose lives have been ruined by refugees, as opposed to trade policies that moved factories overseas and gutted unions with their fancy high pay and benefits.

All across this fine land, pesky attorneys have filed challenges to President Steve Bannon's entry ban on citizens from seven countries – and they have been winning! (Is it the blatant unconstitutionality? The irreparable harm to the plaintiffs? Yes and yes!) But there are so many holes in the judge’s order! Like, what does it mean that all Homeland Security employees are “enjoined and restrained in any manner, and by any means” from removing refugees and visa holders from the seven countries?* And that the U.S. Marshal’s service is directed to take those actions “deemed necessary” to enforce the order? Stupid judges – why can’t they ever just say what they mean?

Well, fret not, concerned citizenry, because the Department of Homeland Security has an answer to these questions! And it is to ignore the order! Yes, just this morning, DHS issued a press release stating “prohibited travel will remain prohibited, and the U.S. government retains its right to revoke visas at any time if required for national security or public safety.” While in fact the U.S. government does have the right to refuse entry to individuals – here’s a fun fact – individuals is the key term. That means – and we’re just spitballing here, as "a person who has been licensed by the state to practice law, and practices law pertaining to immigration" - cancelling the entry of entire nationalities while they are mid-air may be a tinch illegal. Also, people with green cards (permanent residents, with the key word being permanent) have a presumptive right to enter the U.S. That’s in the actual statute, as opposed to the 3 a.m. ravings of a deranged orangutan with the impulse control of a Goldendoodle puppy on meth.

In addition to the protests at airports nationwide, attorneys are suing for contempt, and there are mixed reports of the Border Patrol complying with the restraining order. Some U.S. Attorneys’ offices have advised the Border Patrol to comply, but some ports of entry are still refusing to let travelers confer with their attorneys, and are reportedly pressuring green card holders give up their rights and “go back home.” Your severely underpaid correspondent knows first-hand that pressuring permanent residents to “surrender” their rights is a common Border Patrol tactic, even BEFORE Weaponized Cheeto’s rise to power.

Yer correspondent can also personally report that individual Border Patrol offices have ZERO interest in answering questions posed by meddling attorneys about whether they are abiding by the judge’s order versus the executive order. Questions were referred to “your national leadership,” which isn’t really that helpful when you are trying to figure out whether, say, your Somali-American family that was planning to drive back from Canada will be re-admitted through a North Dakota land border. Shockingly, given the isolated location of places like Pembina, North Dakota (we are led to believe it exists, or at least there’s a phone and some sort of border officer hut there we guess), attorneys have not been exactly rushing there in person to protect the rights of immigrants.

Yet, when DHS closes a communication door, the airlines open a window. Reports from Minneapolis/St. Paul International Airport (yes, it’s a thing – have you been here? It’s huge!) are that Delta is complying with the judicial orders. Could it be that the airlines sense they could be in for a whole heap o’trouble if they keep refusing to allow “them” onto airplanes? Maybe Delta is taking the lead since they have a lot of negative publicity to get out from under, what with ignoring that African American lady doctor who volunteered to help in a medical emergency and a history of refusing to let imams on board.

Yes, campers, it’s a world turned upside down – we agree with Dick Cheney that’s it’s a pretty awful idea to ban a religion, and we are saluting airlines for their courage. More lawsuits and snark to follow.

*All countries we have dropped bombs on in 2016, except for Iran. Coincidence??