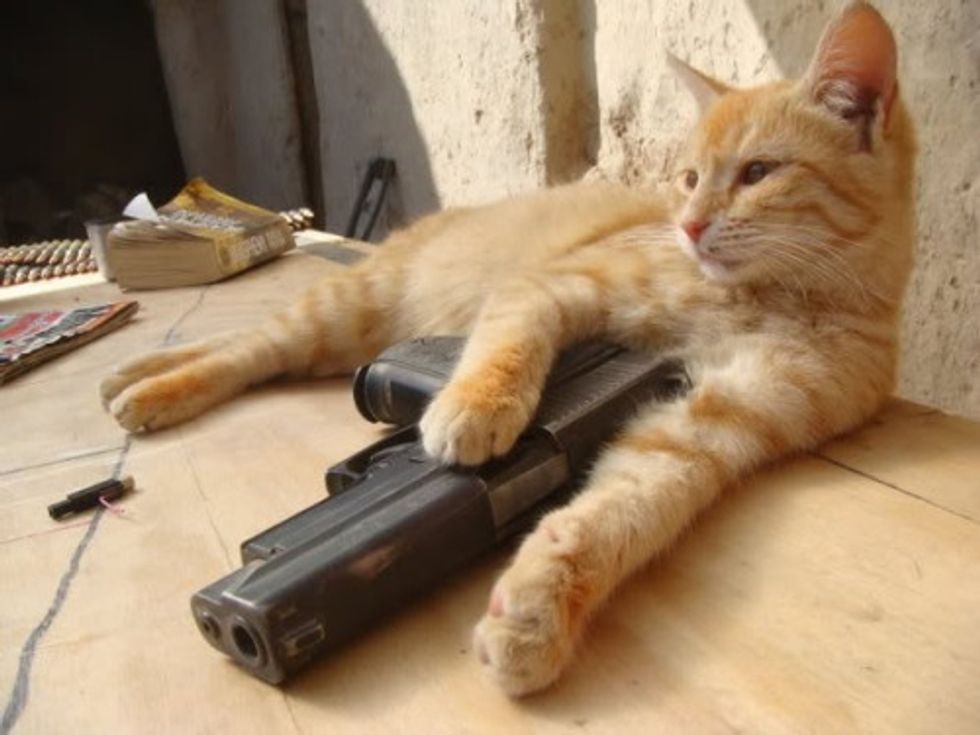 How are America's Responsible Gun Owners preventing crime and tyranny this week? We bet there's just no end of stories of valiant crime-stoppers and freedom defenders to look at!

Other Than That, Safety Class Went Great

In Orem, Utah, two police cadets were waiting for their gun safety class to start, and then they learned an important lesson about gun safety:

Utah Valley University spokeswoman Melinda Colton says one student was showing a handgun to another student Monday evening when it accidently fired, striking both of them.

Happily, neither injury was life-threatening; one of the students was treated at the scene, and the other was briefly hospitalized. Also, there's an important clarification from Ms. Colton, who said that students are allowed to bring their own firearms to class, but they should not be loaded. It was also apparently a serious etiquette faux pas for the cadets to not bring enough bullets for everyone.

The AP didn't say whether the students got extra credit for providing such a clear lesson about the importance of clearing the chamber before looking at your pistol.

In Kentucky, a sheriff's deputy wanted to be ready for any potential wedding crashers, so he brought a personal firearm along with him to a wedding, adding a certain je ne sais quoi the fuck to the ceremony:

Detective Cory Golightly, a McCracken County sheriff’s deputy, brought a personal weapon over the weekend to the wedding at Bardwell Baptist Church in nearby Carlisle County, reported WPSD-TV.

The weapon fell to the ground and fired -- striking Golightly’s mother -- as the deputy adjusted his jacket, investigators said.

Pianist Jeanine King, who was leaving the ceremony after providing the music, was astonished that someone would have a gun at a church service, but credited Golightly with handling the situation very professionally, apart perhaps from the part where he dropped his gun and shot his mother:

She said once she heard Golightly call for his mom, she knew something was really wrong. When she got to where it happened in the foyer she said things were not chaotic.

Golightly's mother was taken to a hospital in Nashville, where she's in stable condition. And with just a few days to go before Mother's Day, you've got to bet he's bringing her some very nice flowers. He'll have the time, since he's been suspended while the shooting is investigated.

Oh, This One Isn't Funny At All, It's Horrifying, People Are Terrible, Don't Even Read This

A Macon, Georgia, man has been charged with second-degree murder after shooting a 17-month-old baby to death while cleaning his gun:

Ronnie Howard, 36, was originally charged with reckless conduct and second degree cruelty to children. The reckless conduct charge was upgraded to murder Friday afternoon in the shooting death of Victor Carroll, according to the Bibb County Sheriff's Office.

Howard is the boyfriend of the baby's mother, or was, if she has any sense. But don't worry, it was an isolated incident, and there are all sorts of wonderful things about how guns keep people safe, and you wouldn't ban bicycles just because they occasionally are involved in deadly accidents, would you? And somebody else with a gun probably scared off a burglar, maybe, so it all balances out.

Look, we told you not to read it.