Gun News Roundup: Wayne LaPierre Is A Vile Sack of Garbage, Plus Some Things You Might Have Not Already Known 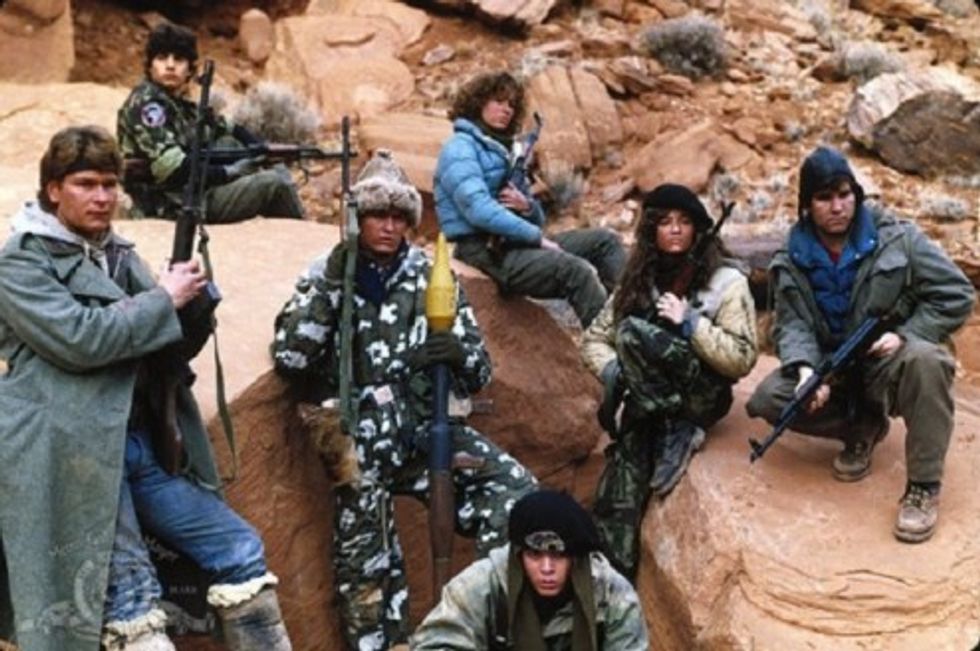 Greetings, representatives of the People’s Glorious Wonkitburo! We thought we would start this edition of Our Cold Dead Hands with a gun-relatedtale that could have had terrible and tragic consequences for world diplomacy, but because no one was hit with any shotgun pellets, turned out to be amusing in a “Holy flurking shnit” sort of way. It seems that back in 2006, Mahmoud Ahmadinejad was in New York for the United Nations General Assembly, that forum every year where the world’s craziest leaders get a chance to stand up and denounce the Zionists or water fluoridation or whatever plot their fortune tellers see in a bunch of goat entrails spread on a rock in their backwards desert kingdoms. One day during the confab, Ahmadinejad and his entourage were getting into their cars outside his hotel. Nearby, a Secret Service agent (the Secret Service guards foreign dignitaries when they are in the U.S.) was adjusting a shotgun mounted on the side of his Suburban when the gun went off. Luckily no one was hurt. Our favorite part of the story is that Ahmadinejad heard the shotgun blast, looked around, and seemingly thought to himself “Gunfire? Oh right, I’m in America.” Then he got into his car and drove to the U.N. because again, America, what are you going to do, amiright?

Anyway, everyone close your eyes and try to imagine the nightmare of an international incident that would have been a Secret Service agent accidentally blowing away Iran’s leader on U.S. soil. During the Bush Administration, no less. And the Secret Service, you would think those guys would be be firearms experts! But no one was hurt or killed, so it falls under the rubric of an amusing, if frightening, little anecdote. It is not much, but we take what we can get at Wonkette.

Now that we have changed into clean underwear, let us discuss the spectacle we witnessed on Sunday, when the literally (yes, literally) potato-brained Wayne LaPierre was the guest on Meet the Press, where every week David Gregory pretends to be something more than a dead floor lamp with a nice head of hair. For instance, when Wayne LaPierre claimed that New York Mayor Michael Bloomberg wants no one to have more than three bullets (presumably he was talking about high-capacity magazines but who the hell can say with this incoherent sack of rancid meat) and that Bloomberg said the NRA wants firearms with nukes on them, maybe David Gregory could have said something like “When in the everloving fuck did Mayor Bloomberg ever say that?” But no, David Gregory just let LaPierre spew shit from his mouth like the judge in Pink Floyd's The Wall, which is why he is worthless. But just to make sure, we searched Google to make sure Bloomberg had never said anything that dumb. And wouldn’t you know it, we came up blank.

The other LaPierre comment that had us yelling at David Gregory’s blank-eyed visage on our laptop screen was his pooh-poohing of the way AR-15’s have become some sort of bogeyman. Why, the AR-15 shoots .223 bullets, which are so weak they are only good for target shooting! Hunters won’t use them to shoot deer, and are in fact banned from doing so in some states! Why David Gregory could not point out that .223 cartridges may not be great for bringing down a ten-point buck but sure did seem damaging enough to all those six-year-olds gunned down by Adam Lanza is beyond us.

This kind of shoddy journalism from the likes of David Gregory is why the NRA is likely to hold the line on gun control, because no one seems capable of banishing Wayne LaPierre and his ilk to the margins of decent society where they belong, and taking their out-sized representation in Congress with them.

To be fair, LaPierre is doing what he is paid to do, which is stamp his feet and throw tantrums until gun fetishists get whatever they want. Same thing with the gun manufacturers for whom he lobbies. So it was predictable this week that Magpul, a Boulder company that manufactures gun accessories like high-capacity magazines, announced that in response to Colorado governor John Hickenlooper signing some tough gun-control measures into law, the company would take its ball and go home, or at least to some state that is not “occupied territory.” No really, Magpul’s CEO called it “occupied territory” as an apparent reference to the original Red Dawn, which saw Colorado invaded and occupied by communist armies. Apparently Hickenlooper’s legislation will require the use of Form 4473. Wolverines!

Predictably as well, this sent the jackass at ProteinWisdom, who once challenged Jim Hoft for the title of Internet's Stupidest Man, around the bend. And since Jeff Goldstein is already well-known for having emotional issues, it was a short drive. So Colorado is now a “de facto police state,” albeit one where marijuana has also been legalized. Guess Galt’s Gash will have to be established elsewhere.

Magpul is not the only company in the death-merchant industry threatening to hold its breath until it turns blue. One of the largest gun manufacturers in the U.S. is Colt, which is headquartered in Connecticut. Might the great state of Connecticut have a somewhat tortured relationship with weaponry these days? It might! So now is a great time for Colt’s CEO to issue veiled threats to move the company to a state that would welcome his blood money. Interestingly, if you read through his entire editorial you will note that Dennis Veilleux mentions that the AR-15 is “used responsibly by millions of Americans for hunting.” But Wayne LaPierre says no one uses the AR-15 for hunting because the ammo is too weak, and he is not the first gun proponent we have heard make that argument. Are people using the AR-15 for hunting small game, like ducks? Or is Dennis Veilleux a lying jackass? Anyway, Connecticut, nice state you got there. Be a shame if anything…oh wait.

At least assholes like Jeff Goldstein and Dennis Veilleux can rest easy in the knowledge that the Senate is keeping their precious gun rights safe from the tyranny of the blue-helmeted United Nations shock troops. This week the Senate voted 53-46 to keep the U.S. from ratifying the UN Arms Trade Treaty. This treaty is intended to regulate the international arms trade, not just for small arms like rifles and handguns but the bigger weapons systems like tanks and artillery. The idea is to make sure that this kind of weaponry is not being used for human rights abuses, among other things. The treaty contains language specifying that it would not infringe on the right to bear arms in member states. In other words, it would not supersede the precious Second Amendment, and gun nuts would be free to continue fapping into whatever high-capacity magazines they have not already filled with armor-piercing bullets. But the U.S. will not be joining the 108 civilized nations that signed on, because the NRA opposed the treaty and when it comes to the NRA, as in so many other areas, our legislators are a bunch of useless dicks.

So let us wrap it up here, good Wonketteers, leaving you all secure in the knowledge that our congress is doing everything in its power to keep us safe from the tyranny of modest restrictions on the sale of assault weapons and reasonable attempts to keep African warlords from buying enough firepower to slaughter every tribe on the Serengeti fifty times over. Don’t you feel better? Until next week, let’s be careful out there.