Gun Roundup: The State Of Our Union's Gun Nuts Is Stupid As Ever 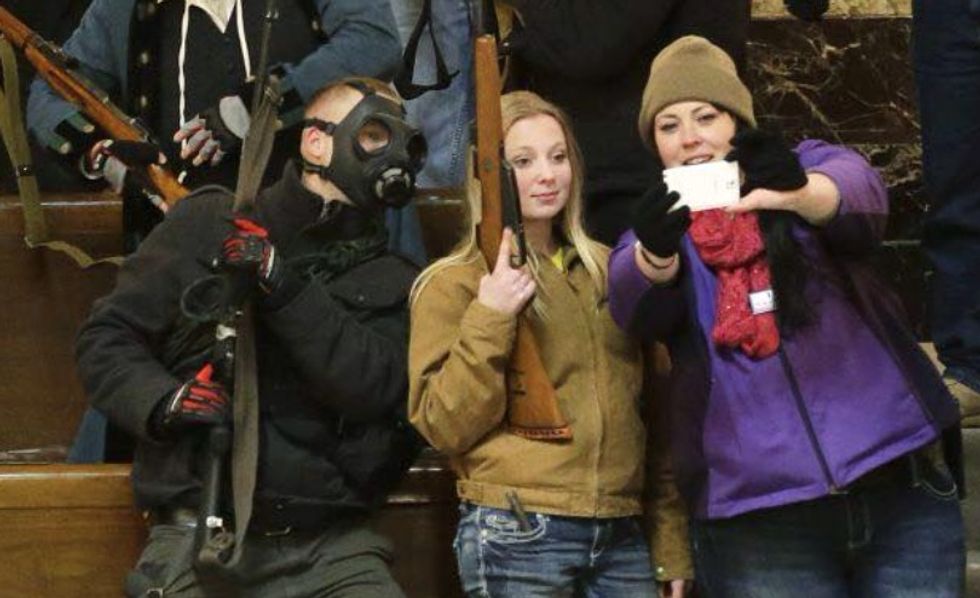 As gun ownership becomes more about making a half-baked political statement predicated on paranoid delusions and industry propaganda, and less about practical matters like hunting and home defense, it stands to reason that gun owners themselves would display an ever-diminishing quotient of common sense. This is just a theory, but damned if the facts on the ground don't support it. WITNESS:

"A vast majority of the weapons were loaded and had bullets in the chamber," reports the New York Times. For the uninitiated, a bullet in the chamber means the gun is ready to fire and indicates that the gun owner is fucking stupid or cripplingly paranoid or both. If you're going to carry a gun, PLEASE don't keep a round in the chamber. That's how people die. It takes less than one second to chamber a round, cowboy.

The height of firearm fashion was on display at the Washington State Capitol building this weekend. One guy had on a gas mask, while another had a bayonet on his rifle and wore Robin's superhero utility belt, it looks like?

These friendly folks are protesting a law that will seize all their guns so communists can take over. Ha, actually no, they're mad that the state recently closed a loophole in the background check law. Background checks are overwhelmingly popular, which means the only hope of defeating them is to get about a dozen people with assault rifles to mill around government buildings.

"When AREN'T there snipers trained on us while we stand for liberty?" asks one guy who really wishes he was important enough for this to be true.

We present these in order of least to most tragic:

In Kentucky, a cop shot off part of his finger while shopping for a new piece. He's suing the store because the injury to his body cost him his job, and the injury to his pride may never heal. Clearly, an officer of the law should know enough not to shoot off his own finger. Clearly, gun dealers should make sure the guns they're selling aren't loaded. Clearly, "should" is the operative word here.

In Texas, a father shot his daughter while showing off his gun to visitors. We are going to have a shortcut installed on our computer that types that sentence for us. The accident wasn't fatal, and the father was arrested and charged with aggravated dumbfuckery and putting a hole in a minor with intent to show off your stupid gun.

In Louisiana, a comfy couch was the scene for a pants adjustment gone awry when Jawan Lloyd Billy fatally shot his friend with a gun he found "by a canal near his home" and had been keeping unsafely tucked away in his trousers. Both men were catching some shuteye on the sofa in question when Jawan accidentally fired his gun in an ill-fated attempt to get a little more comfortable. The canal will not be charged.

In Missouri, oh God, yep, a five-year-old fatally shot his nine-month-old brother with a revolver he found -- where else? -- in Mom's bed. On the 911 call, Mom very responsibly "claimed the infant had been shot in the head with paintball gun." Said a neighbor of the family: "They're a very good family and this was a tragedy. It's a sad deal. I just hope everybody prays for them." At press time, it was unclear whether everybody's prayers had accomplished anything at all, or if God is deaf to our idiot bleating.

On A Lighter Note! Rally For Gun Sense In Virginia Was Well-Attended, Imagine That

Monday was Lobby Day in Virginia, and in terms of attendance, it looks like gun sense won out over gun nonsense. Even the gunfellows acknowledge they got beat:

Our source claims the gun sense crowd was twice as big as their opponents, despite a big online push by the pro-gun crowd to rally the troops. So that's good.

People, this is like THREE DAYS of gun stories. What horrors await in the next few days? We absolutely can wait to find out!