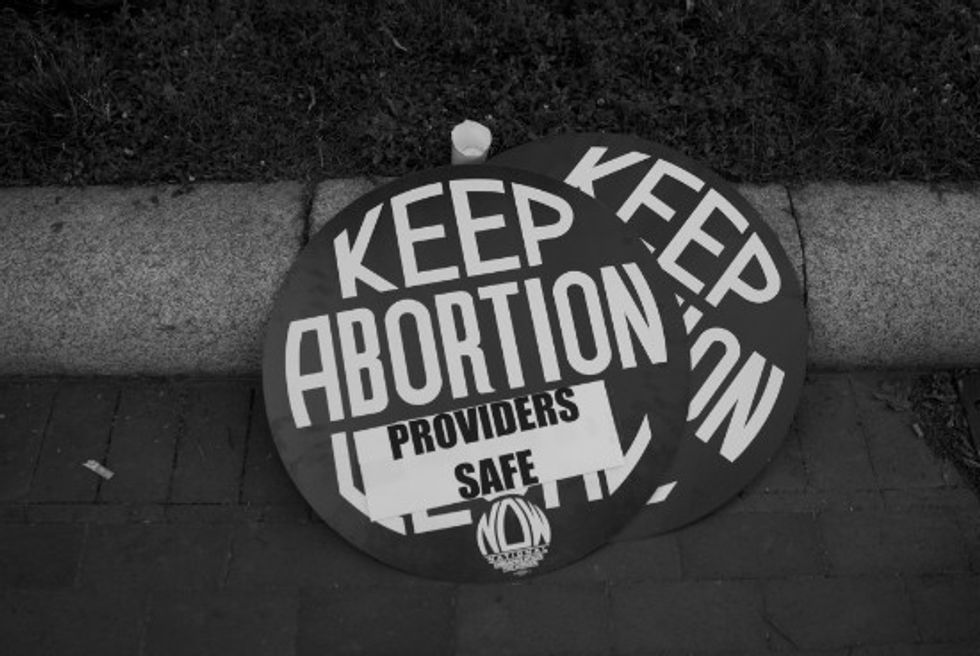 Tuesday morning, abortion opponents went before the Wichita City Council seeking to shut down the South Wind Women’s Center, a clinic that provides abortions. Among their complaints: The clinic draws gun violence.

This struck some, including the clinic’s director, Julie Burkhart, as ironic. After all, South Wind opened in April in the same building that housed George Tiller’s clinic. Before Tiller was murdered in church by an anti-abortion extremist in 2009, there was indeed documented gun violence in front of the clinic—by Shelley Shannon, an abortion opponent who shot Tiller.

Naturally, that is not how they see it. It never is, is it?

Reached by phone, Mark S. Gietzen, chairman of the Kansas Coalition for Life and one of the petitioners, had a rather different account. He said he and his fellow volunteers had counted 18 incidents involving guns — none actually discharged — between 2004 and 2009, two of which were security staff employed by the clinic pulling guns out of a holster, Gietzen said. [...]

“The fact is that this is typical about what happens at the abortion clinic,” he said. “Abortion clinics are going to bring that sort of clientele. You’re not going to have a mad husband or a Shelley Shannon showing up at a dental office.”

Say, that IS a good argument! Abortion clinics just naturally attract violent terrorist thugs who like to threaten and sometimes burn the village to save the village, so the obvious solution isn't to lock up the terrorists, ohhhhhh NO, or take away their matches, ohhhhhh NO, but to shut down the clinic. Obviously, right?

Not that Gietzen considers those "pro-life" terrorists to be part of his movement. Ohhhhhh NO. Like that she-seems-nice Shannon lady who shot but did not murder Dr. Tiller, or Scott Roeder, the man who shot and DID murder Dr. Tiller? They were pro-choice actually. No, really, it's true!

“We comply with the law,” he said. Shannon and Roeder, he said, “are law-breaking people.” You could say they’re on the pro-choice side: If we choose to kill it’s our choice to do whatever we want.”

Haha, we think that is supposed to be a joke, but godDAMN, it's a bad one, isn't it? Everyone knows that most "pro-lifers" are really super nice people who do not do violent things or terrorize anyone, and that the most prominent "pro-life" organizations do not condone violence. Except those like, say, the most famous "pro-life" organization, Operation Rescue, which hired Cheryl Sullenger as its senior policy advisor after she served her time in federal prison for conspiring to bomb an abortion clinic, but hey, she has SO renounced violence since then, and it's a TOTES coincidence that she helped Scott Roeder stalk Dr. Tiller and then murder him. That was an isolated incident anyway. Just like the thousands and thousands and THOUSANDS of other isolated incidents of violence and terrorism by "pro-lifers" against doctors and their patients.

Besides, as Gietzen points out, it's really the clinic's fault for provoking and antagonizing the protesters in the first place, what with the clinic being there and all, and if the clinic does not want to get blowed up, or its employees and volunteers and patients do not want to get shot, well, then, the clinic just shouldn't be there, should it?

“Even a well-meaning dog will bite at some point in time if you keep antagonizing it,” Gietzen said.

Asked what he meant by that, Gietzen said, ”We have this concealed carry thing where half the people in Kansas are walking around with firearms.”

“The way this guy acts, I’m afraid that someone’s going to shoot him,” Gietzen continued, referring to the escort. “He’s asking for it. I don’t want for that to happen…It’s not good for the cause.”

Gietzen refused to say whether he or his fellow protesters are armed. “That’s not a polite question to ask an individual,” Gietzen said. “That’s why it’s concealed.”

Ah, yes, it sure would be impolite to ask Gietzen if he is serious about that idle threat he just issued to a clinic escort, wouldn't it? We should probably just hope he isn't and wait to see what happens. If that escort winds up dead, we'll know for sure, and then hey, the protesters will be right, and the clinic WILL be a dangerous place, and then it can be shut down so the "pro-lifers" don't have to kill any more people in the name of life, hooray!