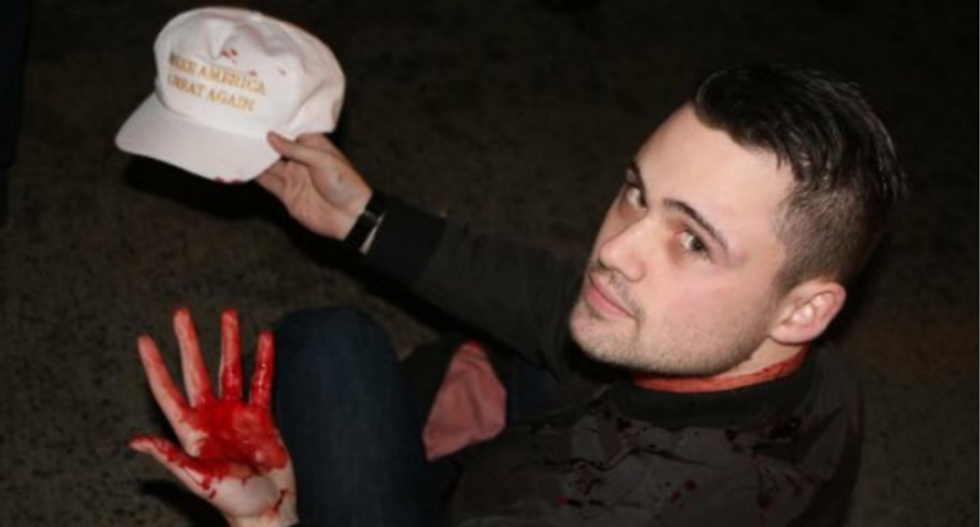 James Allsup, the president of Washington State University's College Republicans, is one of the many precious darlings who have been outed after attending the Nazi Jamboree in Charlottesville over the weekend by the Twitter account Yes You're Racist.

In response to this, WSU president Kirk Schulz issued a statement on Twitter directly condemning the rhetoric and violence at the march ... and then following that up with some BS about how people with controversial viewpoints must be "heard" at universities. Which is odd, because I'm not convinced that there is anything in the Constitution about people having to actually listen to you.

Allsup is now claiming that he is being unfairly maligned as a racist, just because he went to a rally with a bunch of white supremacists, and was actually going to speak at that rally had it not been cut short. He says he is not "alt-right" but rather a paleoconservative with libertarian leanings. Ah yes, like Pat Buchanan.

"They have no proof that I'm a racist," Allsup said. "They are slandering me and that I'm racist without evidence because I talk about history and I talk about American politics."

Huh. You know, a lot of people talk about "history" and a lot of people talk about "American politics." Probably most people, even, at one point or another. I know that I do both of those things quite regularly! I am quite sure that the simple act of talking about "history" and "American politics" in and of themselves is not what would lead anyone to believe that Allsup is a racist. Perhaps it was instead what Allsup says about "history" and "American Politics" that leads people to that particular conclusion. Perhaps it is also the fact that he showed up at a racist rally to help protect a statue of Robert E. Lee?

Just saying, don't show up to a clown convention wearing a red nose and giant shoes and then be aghast that anyone thinks you are a clown.

Now, in the interest of being "fair" -- let's try and take him at his word for a moment and imagine that he came all the way to Virginia for totally not-racist reasons, to go to a rally hosted in part by Richard Spencer, a white supremacist Nazi. The fact that he did not at all consider the fact that participating in a rally consisting of hundreds of white men protecting a Confederate statue and throwing Nazi salutes contributed to a lot of people of color feeling absolutely terrified, still makes him, if not an out and proud racist, than at least the most inconsiderate human on the planet. And also a racist.

Allsup is far from the first person to be identified at the rally. Cole White of Berkeley, California, was swiftly identified, and subsequently lost his job at Top Dog, a hot dog fast food chain.

Peter Cvjetanovic, who "identifies" himself as a White Nationalist because he thinks that's way classier sounding than "Nazi," was also identified. He was very disappointed that a picture of him that went viral made him seem like an "angry racist." Rather than, I suppose, the "perky racist" he normally is.

The lesson to be learned here? Actions have consequences! And attending a Nazi rally is a really poor way of sending the message 'I am not a racist.' In fact, one might even say that the base level not-racist thing to do is not attending nazi rallies, ever. It doesn't even involve any effort beyond just "not going." It is the laziest way possible to not end up with your picture blasted all over the internet identifying you as someone who attended a Nazi rally.