Guy Who Wrote Trump's Speeches Accused Of Putting Cigarettes Out On His Ex-Wife. Surprised? 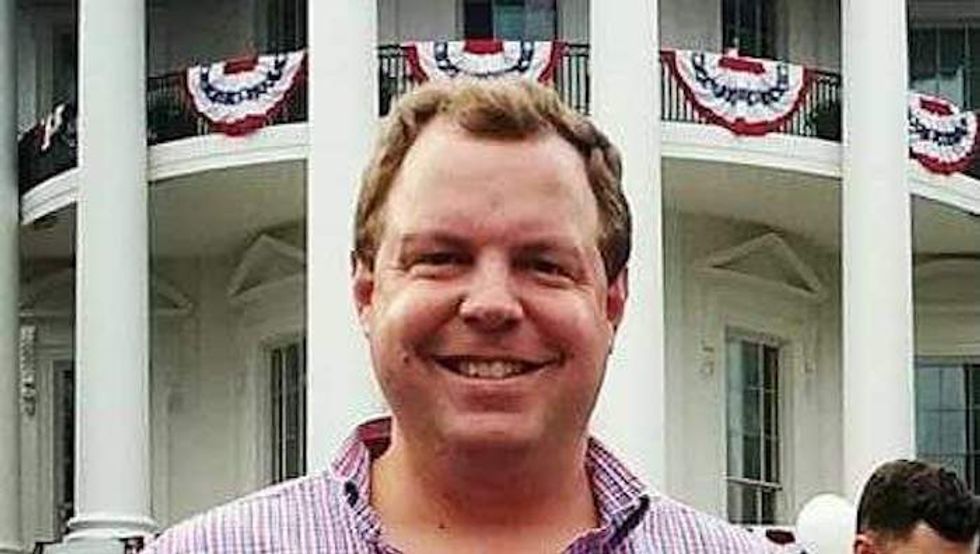 White House staffers are dropping like flies this week. First there was Rob Porter, who was accused of domestic violence by two ex-wives and an ex-girlfriend. Now we've got David Sorenson, a White House speech writer, who has resigned following a Washington Post inquiry into accusations of domestic violence by his ex-wife, Jessica Corbett. Who would have thought that a guy who wrote speeches for Donald Trump would be a violent sociopath?

Rather than wait for the article to even come out, Sorenson handed in his resignation right after WaPo reporters contacted the White House for comment.

The details of the abuse, which Corbett also provided to the FBI as part of Sorenson's background check, are positively horrific.

Corbett first contacted The Post a week before Porter’s case became public. She said that during her marriage to Sorensen, he ran a car over her foot, put out a cigarette on her hand, threw her into a wall and grasped her menacingly by her hair while they were alone on their boat in remote waters off Maine’s coast, an incident she said left her fearing for her life. During part of their marriage, he was a top policy adviser to Republican Maine Gov. Paul LePage.

She said she did not report her abuse allegations to police because of Sorensen’s connections to law enforcement officials.

Two additional sources say that Corbett confided to them about the abuse during their marriage. She provided a picture of the scar on her hand from the cigarette burn. She showed the posts texts and emails from Sorenson in which he was verbally abusive, and texts and emails in which she discussed the abuse with other people during the course of their marriage. She had also given this information to the FBI.

Which makes me wonder -- what exactly is the purpose of these damn background checks anyway? Really. Like, is the FBI listening to these women and looking at pictures of them with cigarette burns and black eyes and going "Yeah, these guys will make GREAT public officials! Hire them!"

Sorenson maintains his innocence, naturally, but says he simply “didn’t want the White House to have to deal with this distraction.” He also says that he was the victim of domestic violence in that marriage, not the other way around.

For what it's worth, Corbett is herself a Republican. She worked for Marco Rubio and Newt Gingrich and hung out with the LePages in Maine.

As for Trump, he is starting to get very, very upset about this whole thing where domestic violence victims are believed just because they have a ton of evidence backing up their claims. Even when the guy says he is innocent! How is that fair? What about due process?

That is not what due process is! Due process can only happen in a court. If you believe the men accused are innocent, that is your right, but that also requires believing the women are guilty of lying. Which means they're not getting "due process" either. Why? Because public opinion is not a court of law.

I believe Jessica Corbett. I believe Jennifer Willoughby and Colbie Holderness. Not because I believe that women never lie, or because I personally dislike everyone in the Trump administration and quite frankly would put nothing past any of them, but because of the preponderance of evidence that they are telling the truth. My personal belief, however, has not had any affect on the lives of these men. The Trump administration chose not to believe their ex-wives when they spoke to the FBI, and the Trump administration chose to accept the resignations of Rob Porter and David Sorenson when that information became public. I was not involved and neither was any other person out there holding the opinion that these women were telling the truth.