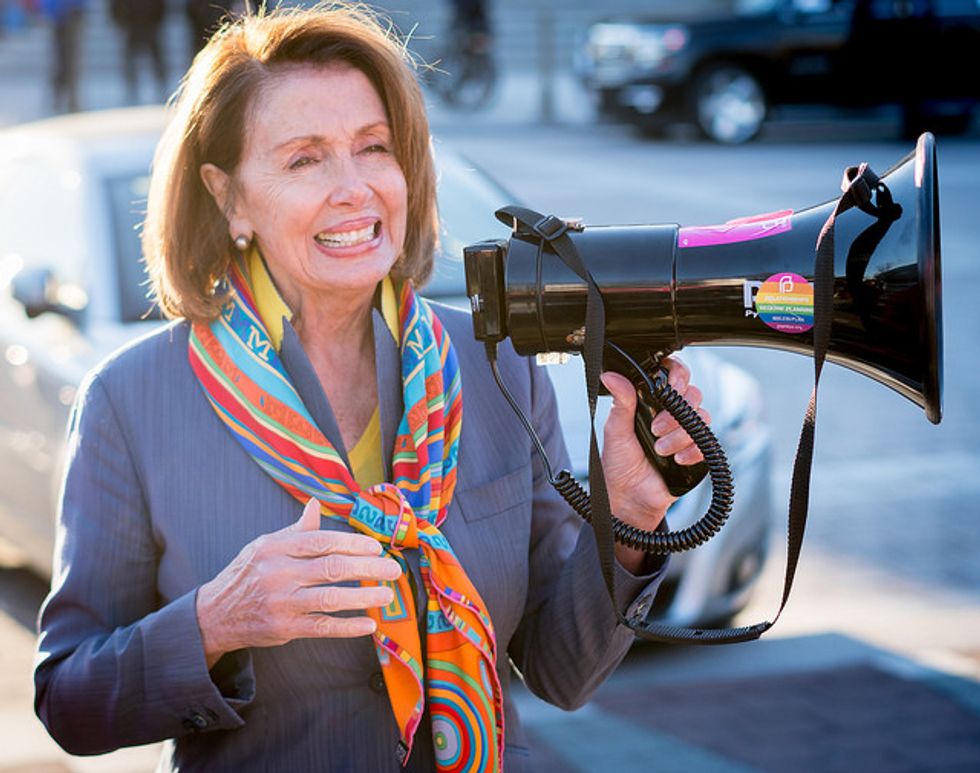 I'll be the first one at Wonkette to say the Thing We Do Not Say At Wonkette: I think Nancy Pelosi is an out-of-touch elite. Not only that, but people defend her so vociferously against people saying mean things like "Nancy Pelosi is an out-of-touch elite" that I occasionally wonder if we are pissed at lovely Grandma who is always there with a hug, or one of the most powerful women in the entire country who has helped set the tone for our political system for decades.

It will I am sure come as a surprise to many of you but ALL MILLIONAIRES WHO HAVE MULTIPLE BESTSELLING BOOKS ARE OUT OF TOUCH WITH AVERAGE AMERICANS. It ain't like Pelosi is the sole elitist in all of the federal fucking government -- you know, the one that's run by a dude that has a gold-plated plane? For some reason (and I love all of my Wonkette comrades truly really!) a lot of people who are perfectly happy to slam average millionaires, by which I mean Republican ones, get all OH NO DON'T HURT THE FEELINGS OF THE WEALTHY when it's a liberal involved? And that Makes Sense because Hillary Clinton might not have been allowed to drive her own car for longer than some adults have been alive but also she's not devoting her millions to having bum fights with starving orphan kids like Betsy DeVos, so it's very easy to think of OURS as the Good Ones, but then we think "elite" is a slur instead of a fucking descriptor and that's where the whole goddamned thing goes pear-shaped and we find ourselves insisting that the rich people are Just Like Us! And if you don't buy that, then why do you hate poor people? Don't you know that they are a helpless species and they are waiting for the rich people to come save them?

It is impossible to imagine that someone with a closet full of designer pantsuits -- even and maybe especially if millions of women fucking love those goddamned pantsuits -- is going to understand the needs and wants of someone who hasn't bought new clothes that weren't for work in over two years. Sympathize, perhaps. Empathize, even. A millionaire is perfectly capable of being concerned, in the abstract sense, about the lives of service workers. But can they understand them? Not bloody likely, unless their backstory is like mine and they were working at IHOP when a thing they wrote went viral and next thing you know they were giving a lecture at the London School of Economics. I've been out of the kitchen for three and a half years and I am already forgetting the details of how much it sucked. That is how entirely unlikely it is that someone who's never even been there could possibly understand.

Not elites. Doesn't begging politicians for a wage look fun?

This is why I collapse into paroxysms of laughter watching these people online accuse each other of being out of touch as though a single one of these motherfuckers has ever had to finish a 10-hour shift on a sprained ankle they sustained when they slipped on lettuce in the walk-in while carrying a 50-pound box of frozen meat -- and then been written up for wasting that much food because the box burst and the meat was ruined. Sure, bro, tell me again how the mean rich lady doesn't get it -- surely a Harvard legacy is the man of the people that I have been waiting for!

There is nothing I loathe more than faux populists, by which I mean people who attempt to speak for me when I have always been perfectly capable of speaking for myself. I don't even mean to call Stoller out, specifically: This shit goes on all the time. In fact, if you let yourself get sucked into this Twitter hole you will find someone who went to Yale accusing the dude who went to Harvard of being an elitist because apparently Yale Guy knows what The People want, and it is Nancy Pelosi, May Her Drycleaner Never Fuck Up Her Chanel.

In all the reaction to the health care bill, you can see two solid tracks forming in public opinion, though you will only read about one of them in any major outlets. There are the elites, who are busy bitching at each other about who loves the Poors more -- which will be widely publicized -- and then there are the Poors who are busy trading DIY medicine tips and advising each other on how to stock up with needed medicines from Mexico or Canada just in case they wake up next week and can't get the shit they need to stay alive. And for all the fucking populism around here, nobody's goddamned well listening to them.

So here's a handy fucking list to determine whether you are an elite, because if we have a definitive checklist maybe we can all stop jerking ourselves off about how we're not one of the BAD rich people, oh no, we are the GOOD COMMON MAN rich people:

If you answered yes to most of these questions then you do not have any fucking calluses on your hands. You are, in fact, an elite. Without conferring any particular moral judgement on the state of BEING an elite, let me just say this: Get the whole entire fuck over yourself and get to goddamned work. We are going to die. We do not give a shit about you. You could declare yourself the Grand Chief Beloved Poobah Of All Poor People Everywhere and we would not give a flying fuck because most of us are too bleeding busy trying to survive in this world that you have created for us to live in, where productivity is up and wages down, where the unions are busted, where people are summarily executed by the state, where we can't afford childcare and housing and for some fucking reason everyone who lives inside the Beltway is blaming goddamned coal miners for this state of affairs as though that made the slightest fucking sense in the world. This is a country with rampant and growing inequality, where health care and education and even clean fucking water are a matter of birth and luck, so fuck Nancy Pelosi who is the leader in a party that actually had the testicular fortitude to say "America is already great" as a campaign slogan because they had to run on their record and couldn't be seen to admit the reality that no, America is most certainly not great for millions of us, and fuck journalists and pundits trying to play Bernie Would Have Won because that ain't gonna help shit either, and fuck everyone who applauds this breathtaking waste of energy by picking the Harvard guy, the Yale guy, or the lady that hasn't had an unscheduled meeting with a member of the public in decades and declares one of them to be the Official Winner Of The Not-Elite Prize.

Y'all wanna be not elite, I suggest you get yourself some nonskids and a polyester shirt and come on down for a while. The first time you get hurt at work and your boss tells you to suck it up and stop bleeding on the equipment, I will personally organize your ass-kissing ceremony because then you will have achieved your dystopian dream of being One Of The Masses. Until then I suggest each of you shove it with vigor and zeal, because until you give up your gilded lives ain't a goddamned one of us below wants to hear shit out of you excepting that you've all learned to behave like grownups and chosen to fix this shit instead of playing Who Looks Better On Morning Joe.