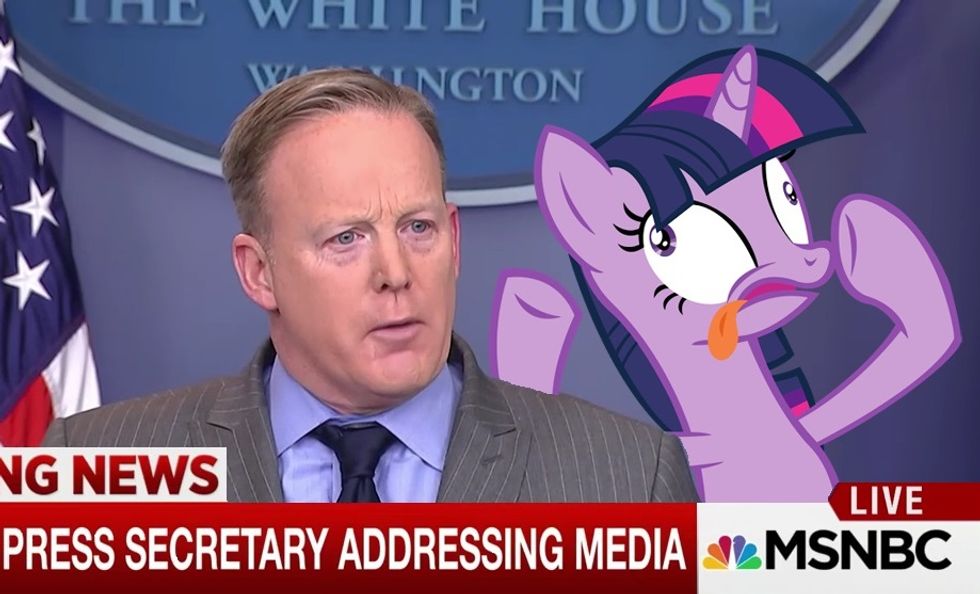 So, here's a preview of the next four years. Or months, if this man doesn't get his blood pressure under control. It's Sean Spicer, lying on orders from the boss, claiming -- with no evidence -- that the Orange Man's inauguration had "the largest audience to ever witness an inauguration, PERIOD."

"This was the largest audience to ever witness an inauguration -- period," Trump White House press secretary claims https://t.co/ICcog0Ivxt

You see, the crowd "looked smaller" because there were white coverings on the mall that had never been used before, making the blank spaces stand out. Uh-huh. Except:

For another, stop believing your lying eyes, it was a record crowd, and definitely not smaller than Barack Obama's in 2009. MAGNETOMETERS!!!!!

Then there's the screaming at the Time reporter Zeke Miller -- Spicer didn't bother naming him -- who mistakenly tweeted that a bust of Martin Luther King had been replaced by a bust of Churchill. Except that once the error was pointed out to him, he issued a correction, as one does, and Sean Spicer accepted the apology.

He appears to have forgotten that completely now.

And no questions allowed. This is the new abnormal.

Now, obviously, this is VERY, VERY IMPORTANT, and is going to completely overshadow the story about the millions of people who marched against Trump worldwide today. If we let it.

We're not going to let it.

Also, we'd just like to remind you one more time that Sean Spicer is the man who quoted Twilight Sparkle, an animated pastel horse from My Little Pony: Friendship is Magic, to prove that Melania Trump's GOP convention speech was not plagiarized. And yes, he even quoted Twilight Sparkle out of context.
Doktor Zoom