Handsome Cory Booker Wants To Guarantee Jobs For Everyone! 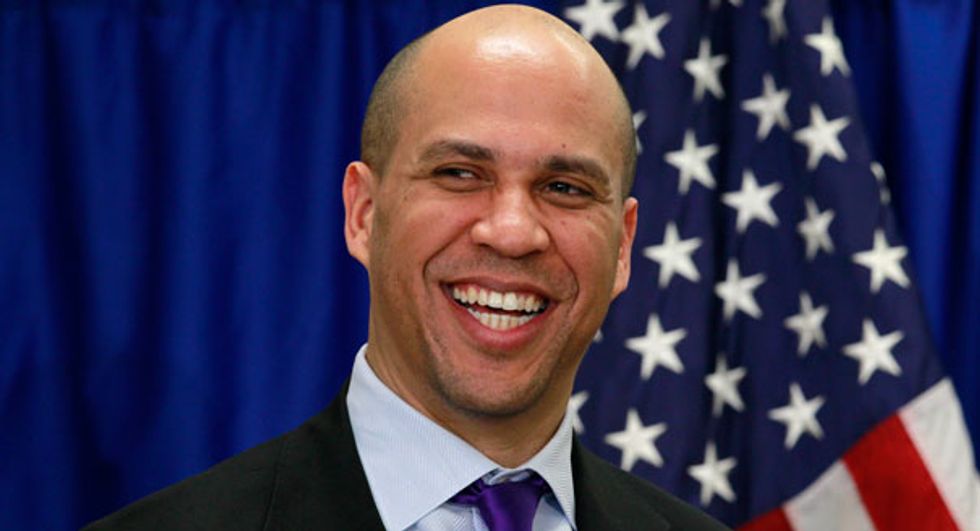 You know what we could all use today? Some good news! Luckily, New Jersey Senator and very handsome man Cory Booker is here with some!

Today, Booker announced plans for a Federal Jobs Guarantee Development Act, which would guarantee a full-time federal government job paying at least $15 and providing health care and paid sick/family leave for any adult that needs one. This would start with a three year pilot program in 15 local areas, selected by the Department of Labor, and, if successful, be expanded throughout the United States.

Expanded nationally, this would ensure that every American who wants a job has a job, and that they have a job they can survive on -- something that yes, people ought to be entitled to.

There are other benefits as well. If the government were to guarantee $15 an hour jobs with benefits to everyone who wanted them, private sector employers would have to raise their wages and benefits in order to attract and keep employees. It would also provide a counter to the unfortunate fact that employers are more likely to hire white employees and non-disabled employees, and provide jobs for those who have been cut out of the job market due to discriminatory hiring.

The Act is based on ideas long advocated by economists Mark Paul, William Darity, Jr. and Darrick Hamilton, and pushed for by Jesse Jackson during his presidential run in 1984.

As Dylan Matthews of Vox points out, a similar program in India, the National Rural Employment Guarantee Scheme, was found to not only increase household earnings for low-income households, both in the private and public sector, but also to increase employment overall in the private sector.

This sounds counterintuitive, right? Shouldn't a program like this decrease employment in the private sector? Shouldn't all those private businesses, now practically forced to pay higher wages to their employees, hire fewer people? But the thing is, this program meant that more people had more money to spend than they did previously, and when people have more money to spend, businesses need more employees and can afford to pay them.

Would a program like this be expensive? Yes, it would! The plan proposed by Paul, Darrity and Hamilton for the Center on Budget and Policy Priorities estimates its cost at $543 billion a year. This cost, however, would be offset by the boost to the economy (which would increase tax revenue) as well as a decrease in the funds needed for social programs. Additionally, these jobs would likely be jobs that benefit all Americans -- providing childcare, infrastructure development and other things that would improve our way of life. Essentially, it would pay for itself in the end.

This is a smart thing for Booker to be doing, especially if he plans to run in 2020 as we all assume he will. His close ties to Wall Street, support for school vouchers and vote against importing cheaper prescription drugs from Canada has cost him serious progressive street cred. In fact, the whole prescription drug thing led me, personally, to call off our wedding entirely. Which was very sad because we would be such an attractive couple.

By embracing Medicare-for-all and programs like this one, Booker balances his act and broadens his overall appeal. Being as beloved (and handsome) as he is, he's also in a unique position to advocate for a few progressive ideas here and there in a way that won't totally piss off and alienate centrist/mainstream Dems. In fact, I've got my fingers crossed that he'll start pushing for an end to at-will employment next. GO, CORY, GO!

This is a good and exciting idea, and that's something the Democrats need to be doing a lot more of if they want to kick Trump the fuck out of the White House in 2020. While there are many lessons to be learned from the horror of 2016, one of them is that progressive ideas are not as vastly unappealing as centrists have been insisting they are lo the past... since NAFTA, at least. It's time to start getting creative and a little radical and presenting ideas that people can get seriously jazzed about. We all need that light at the end of the tunnel right now.