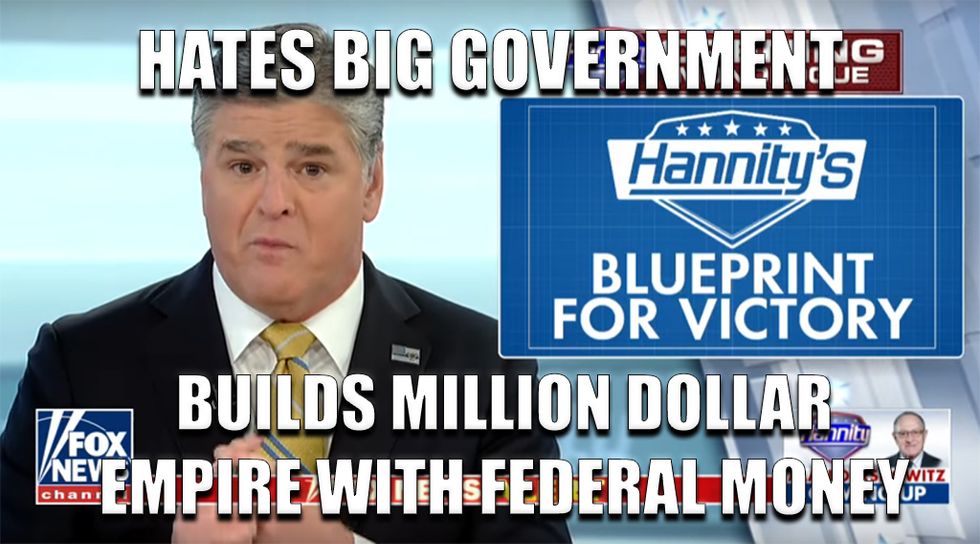 A semi-nude man accused of killing four people at a Nashville Waffle House is still on the run this morning. Police warn that he is to be considered armed and dangerous. The shooter was initially stopped by a patron who wrestled the AR-15 away.

Sean Hannity has a multi-million dollar real estate empire of 870 foreclosed homes in seven states owned by a nesting series of shell companies. Maybe that's why he's been so nice to HUD Secretary Ben Carson?

The DNC is suing the Trump campaign, Russia and Wikileaks for dicking around in the 2016 election, and DNC chair Tom Perez is telling critics on the far-left and right to wake the fuck up.

As our Five Dollar Feminist has been trying to tell you, there is a strange relationship between Michael Cohen and Keith Davidson, one of the lawyers involved in all those hush money payments to Trump's mistresses.

After a report from the New York Times's Maggie Haberman about how Michael Cohen might flip on Trump, Trump spent the weekend bitching on Twitter. Habersarus appeared on CNN to stand by her reporting, saying that everyone around Trump calls him "abusive," particularly to Cohen.

The Trump administration wants to use the Defense Production Act of 1950 to help the coal and nuclear industry. The little known rule is a leftover from the Korean War that allows the president to boost industries critical for national security.

The endless grift of snobbish piece of shit and EPA Director Scott Pruitt continues with a deeply discounted mansion owned by an employee of a telecom giant that was coincidentally lobbying for deregulation. Pruitt conveniently never listed the sale of the home on financial disclosures, and has had a lot of unethical side jobs.

The Trump administration contends Native Americans are a race, not federally recognized tribal governments, and they're threatening to take away their Medicare unless they get jobs.

Civil service workers are now the smallest share of the American civilian workforce since 1967 as more and more get forced out of their personally rewarding middle-class jobs. Thanks again, conservative budget fuckery!

An Army chaplain at Fort Bragg says he was following orders from Jesus when he told another soldier that he couldn't conduct a gay wedding, and now it's raising questions about the validity of the Chaplain Corps.

Navy and Marine Corps leaders say that transgender troops are not fucking up unit cohesion. So shut it already, Christ.

The Trump administration is wasting time and resources with xenophobic bullshit and not allowing soldiers to do their jobs, and the death of Spc. Nemanja "Yani" Janicijevic, an immigrant soldier, is shining a light on their bureaucratic border wall.

The Supreme Court is set to hear arguments for the Muslim bantravel restrictions on ethnic and religious minorities later this week, but that fight is also dragging Trump's plan to create a National Vetting Center back into the spotlight.

The Senate foreign relations committee is expected to tell Mike Pompeo to fuck right off to his CIA hidey-hole in Langley after Sen. Rand Paul declined to support his nomination.

Aside from the nomination fight for Mike Pompeo, the Senate is up to some shady shit this week, like slashing debate times and fast-tracking Trump nominations.

After seeing candidates in bitter primary fights get even nastier, Democratic leaders are beginning to intervene -- but the strategy could backfire (again).

Eric Greitens's sex scandal has been a boon for Sen. Claire McCaskill as her Republican opponent, state AG Josh Hawley, faces attacks from the left and right.

Retiring Tennessee Republican Sen. Bob Corker won't be mean to the Democrat running for his seat, nor can he find anything nice to say about the Republican candidate, Rep. Marsha Blackburn, a corporate-controlled crank. This has prompted Mitch McConnell to bitch at Corker about staying on message.

For the first time, teachers in Arizona have voted to strike statewide on Thursday, provided state legislators do not meet their demands. Legislators have cut $1 billion from schools since 2008; Arizona ranks 47th in student spending.

North Korean leader Kim Jong Un announced that the nation no longer NEEDS nuclear missiles or tests. Ahead of talks with the North, South Korea has decided to stop blaring K-Pop across the DMZ. As usual, Trump has prematurely bragged about creating peace in the far East, but foreign policy experts are warning that this could all be a clever ruse.

Obama's secret international diplomacy tour will take him to South Africa to give a lecture in commemoration of the 100th birthday of Nelson Mandela; he'll also convene a five day meeting of 200 young people in Johannesburg.

The international grey market is salivating at the windfall profits it can make during Trump's trade war.

French President Emmanuel Macron will head to Trump's White House later this week where they're expected to bitch at each other about foreign policy. Trump has opted to make his first state dinner a tiny one, booting out Democrats and media.

Rather than respond to a question about her husband's curious anti-Trump tweets, Kellyanne Conway railed against CNN's Dana Bash, calling Bash a mean mean sexist who was "crossing the Rubicon."

Amid chants of "Nazi scum, get out," Milo Yiano-whatever was kicked out of a DSA bar in Manhattan. There's video, and it's delicious.

App developer and Cambridge Analytica researcher Aleksandr Kogan apologized for stealing everyone's Facebook data on 60 Minutes and defended himself, saying that nobody cared back then, that stealing data was "a feature, not a bug." Kogan also says he isn't a Russian spy, and he might sue Facebook for being mean to him. [Transcript]

Last night John Oliver 'splainered the Iranian nuclear deal (JCPOA), and how it's not at all "a bad deal."

And here's your morning Nice Time! HOW TO BARK LIKE A MEERKAT!

We're 100% ad-free and reader supported, so feel free to buy us a cup of coffee.