Happy 78th Birthday, Nancy Pelosi! Your Present Won't Be Here Until November But It Is This Gavel 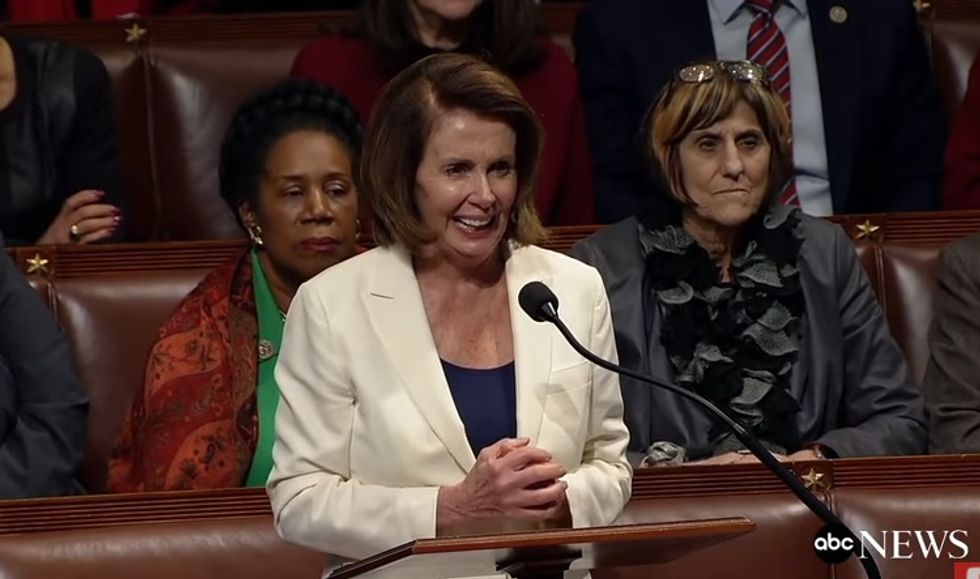 OK fine, we know there are some elements of the Democratic Party having a very important conversation about when certain people in leadership are going to pass the torch to the younger generation, but this post is not about that conversation, because it is Nancy Pelosi's 78th birthday, and Nancy Pelosi is a badass. Happy birthday, Nancy Pelosi!

Regardless of however Democratic leadership changes and evolves in the coming years, those WHIPPERSNAPPERS better be ready to recognize that, when Democrats take back ALL THE POWER, they will have Pelosi to thank, firstly because she raises shitloads of money, but also because Pelosi is REALLY REALLY REALLY GOOD at what she does. Sure, the GOP attacks her constantly, but that's just because she's a strong, brilliant woman, and the GOP hates strong, brilliant women. Take Pelosi out of the equation and they'll just transfer their attacks to whomever assumes the leadership position next, if it is a woman, because that is kind of how they have been doing things since time immemorial. (And no, that is not a good reason to say, "Therefore we should give it to a young white guy who's never done this before!") If it isn't a woman, take it to the bank that all the GOP commercials will be about how all elected Democratic officials are required to at all times obey Maxine Waters and Elizabeth "Pocahontas" Warren, regardless of who is speaker of the House or the fact that Warren, as a senator from Massachusetts, in fact controls very little in the House of Representatives.

In short, we are #TeamPelosi, because the woman is a boss. She knows how to keep a caucus in line, and the number of times Chuck 'n' Nancy have rolled Donald Trump in the past year alone is proof enough we still very much need her leadership. Can you imagine what the Trump presidency will be like after the midterms if those two walk into the White House as the two people with the KEYS TO CONGRESS?

Months back, we wrote a very important blog post called "Guys? Shut The Fuck Up About Nancy Pelosi." Poor Jon Ossoff had just lost his special House race in the Georgia Republican district that used to belong to Tom Price, and Democratic congress-people whom we are sure are VERY NICE, but actually aren't as progressive as Pelosi, were saying "our brand is toxic" (Tim Ryan) and "I think you’d have to be an idiot to think we could win the House with Pelosi at the top" (Philemon Vela) and OH THE WOUNDS that were being licked! Fast forward to now, and we've just flipped a hard right district in Pennsylvania, a Senate seat in Alabama, and about a million other state legislative seats, and we are just getting started.

So of course, everybody is fighting about Nancy Pelosi a whole bunch again, because 'tis the season.

And yes, you are right, Conor Lamb in Pennsylvania did run and win saying he wouldn't support Pelosi for leader. Maybe for his particular district that is the right message, but it was hardly the center of his platform. But not every Democrat who wins in the coming blue tsunami in November will be running on that, because we're gonna flip the fuck out of ALL KINDS of districts. Also, young adorable Conor (whom we like very much!) will get to learn a hell of a lot from Nancy Pelosi over the next few months, regardless of whether he personally supports her, and whether he likes it or not.

We predict that, regardless of the Pelosi-hatin' arguments that happen every two months like clockwork, and based on current trends -- hell, even DEVIN NUNES'S SEAT is in danger and oh my god we will run naked through the streets if that shithead loses -- Democrats will retake the House handily and Nancy Pelosi will be elected speaker again. And when she is, we're certain she'll make a path upward for some of these youngin's, so that the newer generation of Democrats can go forward and kick all kinds of ass, having been trained for the job by one of the best political leaders of the last century, a woman who inspires such vicious feelings in Republicans precisely because SHE WINS. (And also because she is a woman.)

Also she is having a birthday today, did we mention it is her birthday?

Oh look, Nancy Pelosi, here is your present, and it is a gavel! Some dumbass is holding onto it at the moment, but don't worry, he will be obligated to give it to you after the midterm elections.

OK, now you may open thread, as long as you promise not to do Democratic intra-party squabbles in the comments, those are DUMB.