Happy Benghazi Day! Watch Hillary Clinton Admit She Did Benghazi, For The LOLs 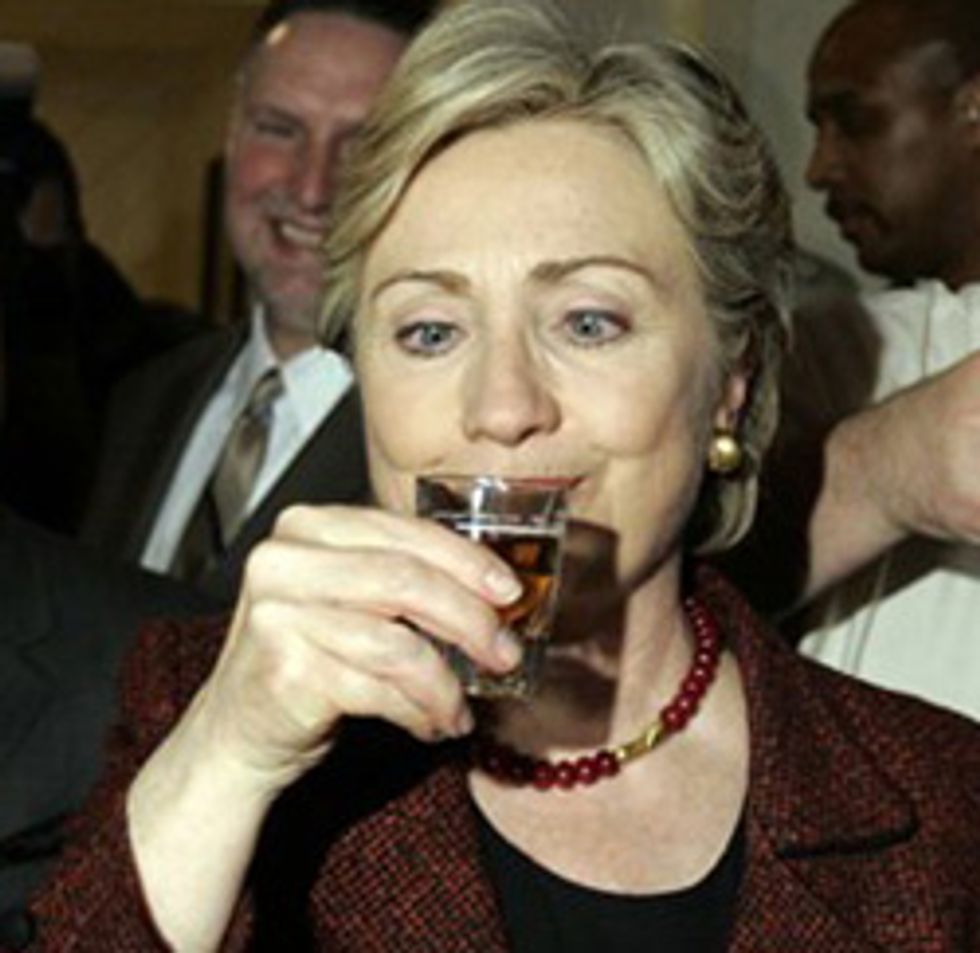 It's here, it's finally here! Hillary Clinton is testifying before Congress, for the first time ever except for the other time she already did, to answer questions that have already been answered a million times. And maybe now we will get to the bottom of the great mystery of how four American died on that fateful day that Hillary Clinton killed them by using a personal email address.

You've got questions? We've got answers.

Is it a city in Libya, which, contrary to the opinion of people who think "9/11: Benghazi Edition" is the Biggest American Scandal EVER but can't find it on a map, is nowhere near Cuba:

One interesting thing about the voters who think Benghazi is the biggest political scandal in American history is that 39% of them don't actually know where it is. 10% think it's in Egypt, 9% in Iran, 6% in Cuba, 5% in Syria, 4% in Iraq, and 1% each in North Korea and Liberia with 4% not willing to venture a guess.

Why did it take us so long to bother investigating Benghazi?

It didn't. There have already been several congressional investigations, plenty of vetting by Fox News CIA experts (who may or may not have worked for the CIA), and a partridge in a pear tree. In fact, as Kurt Eichenwald explains in a VERY COMPREHENSIVE piece at Newsweek about the whole Clusterghazi:

This single Benghazi committee has been “investigating” the attack for longer than Congress conducted inquiries into Pearl Harbor, 9/11, Iran-Contra, Watergate and intelligence failures in Iraq.

Who's in charge of this investigation, and shouldn't he have wrapped it up by now?

Rep. Trey Gowdy is in charge, and he sucks at his job. And he's about one more bad headline from having a nervous breakdown, by the looks of it, since he recently told his Republican colleagues to "shut up" and stop talking about his investigation and gosh, it is sooooo hard to be him, with all this pressure, and everyone criticizing him for continually fucking up and making false allegations and looking like a giant dickbag, and LEAVE TREY GOWDY ALOOOOOOOONE!

So why are we still talking about Benghazi?

Everybody thought Hillary Clinton was unbeatable, right? But we put together a Benghazi special committee, a select committee. What are her numbers today? Her numbers are dropping. Why? Because she’s untrustable. But no one would’ve known any of that had happened had we not fought and made that happen.

So this isn't really about four dead Americans?

But isn't Hillary Clinton in a whole heap of trouble for breaking the law?

But Bobby Jindal said she is under investigation by the FBI!

You're gonna listen to that idiot?

But the New York Times said --

You're gonna to listen to that idiot? Don't you remember how we we full-on wonksplained the pathetic evolving story of how the New York Times at first alleged Clinton had been referred for criminal inquiry because of her email use, but then the Times kept changing its headline and its story and looky here, it turned out that pretty much nothing in the original article was true? And the Times eventually had to say, "Oh, sorry we suck so much and got everything wrong. We still cool?" And the Clinton campaign was like, "Why don't you fuck right off, and then sure, we cool." Come on, y'all, catch up!

Didn't she at least kill Vince Foster though that one time?

Sure, why not, go with that.

So this is all just a political witch-hunt to stop Hillary Clinton from becoming president?

Well, not just that. It's also about Republicans raising money by exploiting the death of four Americans:

There is the Stop Hillary PAC, which broadcast an ad about Clinton and Benghazi. The Virginia GOP held a “Beyond Benghazi” fundraiser where donors had to pay $75 to attend and $5,000 to sponsor the event. A blog post before the 2014 election by the National Republican Senate Committee stated, "Americans deserve the truth about Benghazi, and it's clear Democrats will not give it to them. Donate today and elect a Republican Senate majority."

But by far the most egregious examples of Republicans trying to raise money on the backs of the dead was by the National Republican Congressional Committee, the official GOP group that works to elect Republicans to the House. In a blog post on its fundraising website, the NRCC told supporters, “House Republicans will make sure that no one will get away from Gowdy and the Select Committee.’’ The NRCC also sent out an email that contained a link that led to part of the NRCC’s site with a URL that ended with the words “Benghazicoverup-contribute.” That page directly sought money for the committee’s political efforts under the words “You’re now a Benghazi Watchdog. Let’s go after Obama and Hillary Clinton.” Beneath that, and directly next to the suggested contribution levels, was a photograph of Clinton and Obama surrounded by the sentences “Benghazi Was a Coverup. Demand Answers.”

Christ, this is disgusting, will you please make it stop?

Wish we could. Unfortunately, Rep. Jim Jordan, who is on the committee and also one of the nihilist members of the House Freedom Caucus, told Sean Hannity the other day that Hillary Clinton is going to sit there in that chair until alllllll of their questions are answered. So we imagine the hearing will go a little something like this, for the next eight months at least:

REP. DICKBAG 1: Did you do Benghazi?

REP. DICKBAG 1: But actually, Secretary Clinton, you did do Benghazi, didn't you?

REP. DICKBAG 1: Can you please just admit you did Benghazi?

REP. DICKBAG 2: Did you do Benghazi?

REP. DICKBAG 1: But actually, Secretary Clinton, you did do Benghazi, didn't you?

Can I watch this shit show because I really hate myself and have nothing better to do?

Sure. The hearing begins at 10 AM Eastern, and you can watch it on probably all of the TVs and also too many livestreams, including right here.