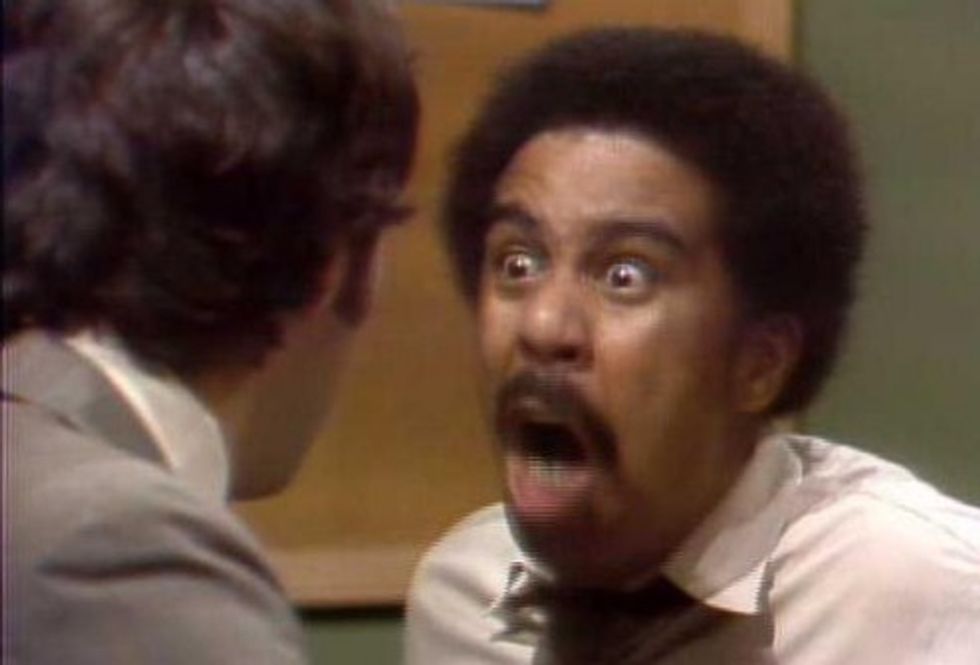 Andrew Breitbart may still be dead, but his legacy of demanding attention by shrieking unintelligible noises like a syphilitic howler monkey with both legs caught in a thresher lives on. And what are Raggedy Dead Andy’s legions of feral Children of the Corn shrieking about today? Benghazi? Gosnell? Solyndra? Well yes, we’re pretty sure they shriek those words in their sleep. But now you can add “Pigford” to the litany of names we will be hearing from this day forward, forever and ever, world without end, amen. That is because the wingnut blogosphere has deemed today “Everybody Blog About Pigford Day.” Man, all these holidays! Yr Wonkette has not yet recovered from the crazy bacchanal that was Sunday’s Lag B’Omer and was hoping for a quiet and uneventful May Day. Thanks a lot, wingnuts.

A quick refresher: Pigford v. Glickman, was a class-action lawsuit intended to redress African-American farmers for a pattern of racial discrimination by the Department of Agriculture in handing out loans and assistance over a fifteen-year period. It was settled in 1999, but in 2010 Congress appropriated another $1.2 billion to settle with more farmers who, for whatever reason, had not been able to file or have their claims heard before a set deadline a decade before.

Of course, anytime the feds starts divvying up an enormous pile of greenbacks, the carnival barkers and flim-flam men will come out of the woodwork (see post-invasion Iraq, federal defense contractors, and pretty much any other recipient of government largesse you can think of). Last Friday the New York Times ran 5000 words of filler on Pigford, which is a lot of column inches to basically say that if the government offers to give people money, even ordinary citizens will lie and commit fraud in order to get their hands on some of that sweet, sweet casheesh. That people are greedy and will take any shortcut in order to get even a little bit of a windfall, particularly in the perilous economic times in which we live, times in which various assholes have made gazillions of dollars by creating worthless “financial instruments” and moving ones and zeros around on computer screens, is only a surprise to anyone who has been confined to a sensory deprivation tank since birth.

The Pigford case first pierced Raggedy Dead Andy’s boozy haze in 2010, after his unconscionable smearing of Shirley Sherrod blew up in his bloated, red-veined kisser. Needing to belatedly cover his ass by pretending he was on the trail of government corruption and not engaged in yet another stunt in his long line of stunts intended to prove that white people are the perpetual victims of everything in Obama’s America, Breitbart latched onto Pigford. Over and over and over he claimed that Sherrod had not been fired because the Obama administration had a knee-jerk reaction to Dead Andy’s deceptively edited video, but because Sherrod had been an original claimant in Pigford and the new attention on her meant that the public would take a close look at the settlement and discover it was a hotbed of fraud, and be properly outraged. This, Breitbart triumphantly declared, was the reason he had been attacked so mercilessly by the left, and not because the video’s editing and his screeching promotion of it as proof of reverse racism in the government had revealed him to be a duplicitous shit-weasel with a moral center so depraved he made the Wicked Witch of the West uncomfortable.

“It’s not about race!” screamed Breitbart and his organization’s heirs, Virgin Ben Shapiro and the Thing with the Camel Face, as they called Pigford “one of the largest, most blatant frauds in American history.” (We pause here to note that the Pigford case so far has cost the government around $4.4 billion, which is a drop in the bucket compared to the waste and fraud paid out to contractors in Iraq, to banks after the economic collapse of 2008, and to bail out George H. W. Bush's son Neilsy after the S&L affair in the eighties, just to name a few much bigger scandals off the top of our head.) “It’s not about race!” these paragons of racial fairness hollered while describing the Pigford settlement as part of Obama’s “’free stuff’ electoral giveaway,” a “multi-billion dollar reparations and vote-buying scheme,” and a plan that “redistributes wealth from the taxpayers.”

Guys, a note: as Editrix’s love Charlie Pierce often says, it is always about race.

So Pigford was the Great, er, White Whale to Breitbart’s Captain Ahab for the last year of his life. Now that the Times has paid attention to Dead Andy’s tale (albeit without the subtle racial code words and race baiting), his minions are screaming that he has been “vindicated.” Today’s day of blogging is basically one big circle jerk in honor of their hero. How many keyboards will they hose down while ignoring other current stories about government wealth transfers that might have wider geopolitical implications? ALL OF THEM, KATIE.