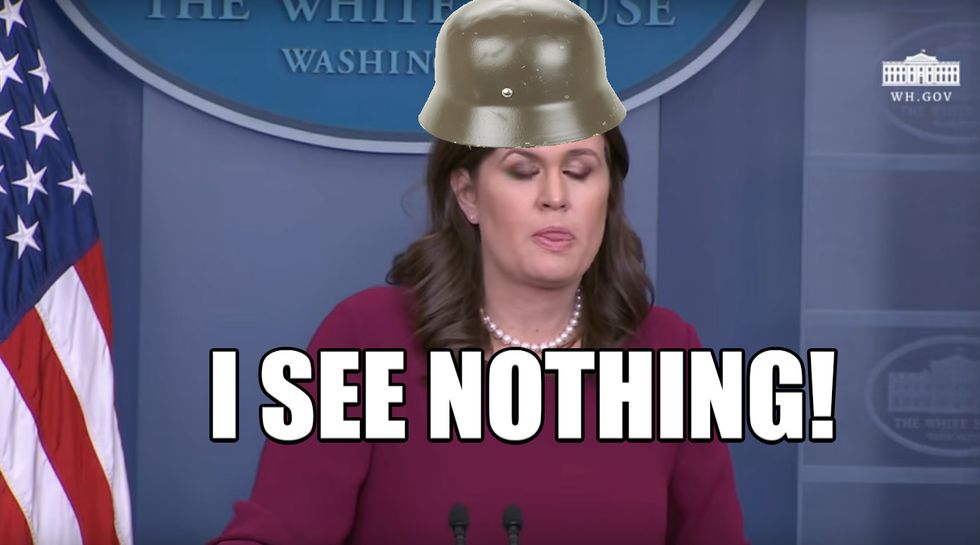 Happy Valentines Day Wonketariat! Here's some of the things we may be talking about today, but first, some Nice Time!

Buzzfeed is going all out to prove the pee hooker tape is real, hiring a crew of lawyers, globe trotting investigators, and super nerds to really dig deep into THE DOSSIER.

The New York Times quit-fired its brand new op-ed writer Quinn Norton after a bunch of people dug up her old racist and Nazi-sympathizing tweets, but they're still letting Bari Weiss scribble nonsense about her vaginal guilt.

Steve Mnuchin's D-list trophy wife is trying to apologize (again) for flaunting her wealth in front of all the filthy poors.

When he isn't playing shitty Christian rock, Jay Sekulow is trying to become the next Sean Hannity or Rush Limbaugh by using his radio show to rail against LIBERAL conspiracies like Trump-Russia, and fluoride.

Science nerds are wondering why there's no money in Trump's budget to combat global health crises. Maybe they should just bring some sick and dying children to the White House to start sneezing and rubbing snot all over the furniture?

States will be forced to choose between fixing roads, schools, waters systems, or Internet tubes for poors as Trump's budget also has no dedicated funding for infrastructure projects like rural broadband.

Last year the White House personnel security office sent out an email to inform people of a new ban on interim security clearances in the executive office. That means the White House officials knew there was a problem with people like Rob Porter for a LONG time.

The heads of the national intelligence agencies told Congress a bunch of inconvenient truths, like the extent of ongoing Russian fuckery, the dangers of climate change, and the power vacuum created by Trump's retrenchment strategy.

Despite all the evidence to the contrary, Trump still doesn't believe that Russian fuckery in the 2016 election grabbed his little hands and pulled him over the top.

Late last night Michael Cohen admitted that he gave Stormy Daniels $130,000 because reasons. Period.  He just gave her a bunch of money for "a private transaction" that had nothing to do with Donald Trump's ALLEGED philandering Forbes fantasy.

The DACA debate in the Senate is already foundering on the floor as Republicans immediately tried to poison the water with about a dozen non-starter amendments like national language, longer detention times, and dumping on sanctuary cities.

Progressives and Dreamers have been making life hell for Chuck Schumer as they continue to bitch and moan about "rights" and "legal status" like a bunch of first-class citizens.

A young father of three called the cops to report a possible B&E but the cops decided to bring him to ICE officials instead of investigating who was creeping in windows at 5:30 a.m.

An ICE attorney in Seattle has been charged with stealing the identities of immigrants to open up credit cards.

The loneliness in being North Dakota's only Rep. has finally caught up to Tea Party whack-job Kevin Cramer as Cramer plans to run for Democratic Sen. Heidi Heitkamp's seat.

New York Sen. Kirsten Gillibrand has decided not to take any more cash from PACs run by for-profit businesses in an effort to steal Bernie's supporters.

On the other hand, Montana's super-rich and slaphappy Congress creep Greg Gianforte announced that he's taking corporate PAC money from private prisons, coal companies and the Koch brothers, despite a pledge not to take corporate cash.

Arizona Republican Senate candidate "Chemtrail Kelli" Ward took a tip from Devin Nunes and started bragging about an endorsement from a very curious blog that can't stop gushing about how she's awesome.

Some congressional hopefuls are airing ads that talk about their sexual harassment stories to try and cut into the old boys club.

With the #MeToo movement cranking up the heat, Democrats are asking Bill Clinton to sit down and shut up so that he doesn't distract anybody ahead of 2018 and 2020.

Florida Democrat Margaret Good crushed her Republican and Libertarian opponent in a local state House race, making her the 36th Democrat this cycle to flip a red seat.

Vice is being sued by a former employee who says that the edgy media company pays women "far less than male employees for the same or substantially similar work."

North Korea won't pay its $2.6 million Olympic bill, and is making South Korea and the IOC pick up the tab.

Israeli police have recommended that PM Benjamin Netanyahu be indicted on corruption charges after finding evidence of bribes and fraud in a wide-ranging corruption case.

Officials in Iceland are warning that computers digging for Bitcoin may trigger energy shortages due to their constant churning for magic Internet money.

Salon is apparently so desperate that they are quietly using their readers' computers to mine Bitcoin, a dastardly deed known as "cryptojacking."

Bristol Palin's husband has filed for divorce. That is sad, Happy Valentine's Day!

In a desperate attempt to impress his special lady friend, a North Carolina man dressed up as a three-star Army general, rented a helicopter and then landed on the campus of her fancy tech company -- and he would have gotten away with it too if it weren't for a meddling security guard!

We're 100% ad-free and reader supported, and we'll never "borrow" your computer to mine Bitcoin.