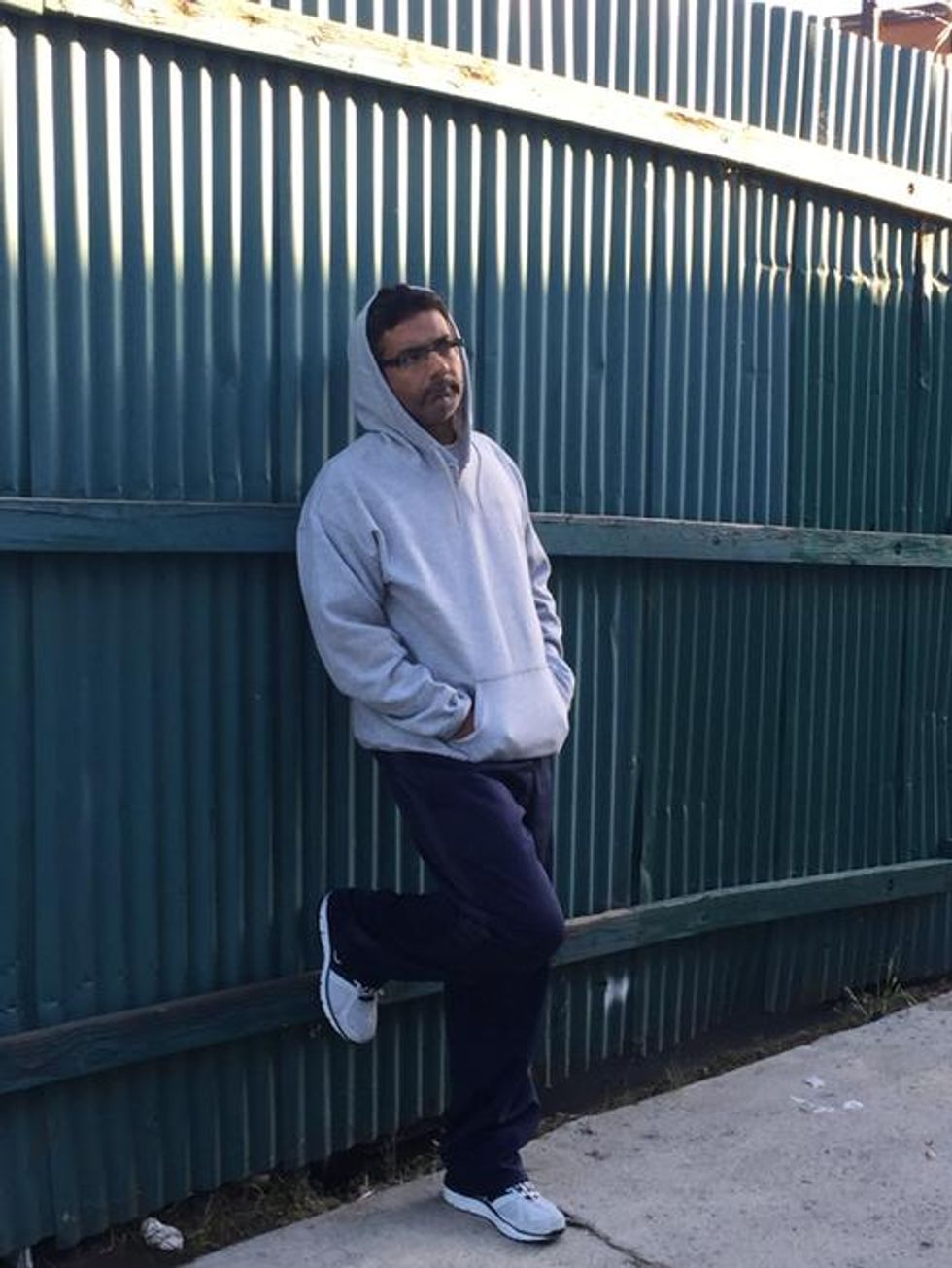 Convicted felon Dinesh D'Souza is free at last, FREE AT LAST! from his eight-month sentence of being held in "overnight captivity" in a "community confinement center." D'Souza, as we all know because of how he has been on TV and radio shows every five minutes to talk about it, was sent to the San Diego gulag by Barack Obama himself, in an attempt to silence D'Souza from criticizing the Obama administration, aka, making illegal campaign donations, in violation of federal elections law, because THAT'S HOW MUCH HE LOVES AMERICA.

Life was hard on the inside, as we learned from this video of D'Souza strolling on the beach to preview his big fancy Vanity Fair profile, like any normal convicted felon. But now that D'Souza is no longer a political prisoner, he's finally ready to talk -- you know, more -- about what life was like in the pokey. And of course the digital home of the wingnuttiest conspiracy theorists in this universe or any other, WorldNetDaily, gets the EXCLUSIVE!!! interview:

“I experienced confinement in three stages,” D’Souza told WND in an interview. “I was obviously elated when the sentence came down that I had avoided prison, and all I had to do was go sleep at the confinement center.

“But then I found out that the confinement center is actually a place where you find hardened criminals, much more dangerous than the executives and criminals who tried to defraud the IRS that you would expect to find at a federal white-collar prison camp,” he explained.

We had no idea that being forced to spend his nights in a "community confinement center," while he spent his days on the outside, doing whatever he wanted -- like going to the beach and appearing on Fox News to attack President Obama and criticizing the president on the Twitters for being so "ghetto" -- was actually harder than being in real prison. Poor, poor Dinesh! But it was even worse than that!

“So when I first got to the confinement center, I was quite alarmed and very concerned for my own safety,” he said. “I had no idea how I was going to get through the next eight months with this type of crowd.

Oh, the horror! Oh, the humanity! While we were under the impression that D'Souza got off real easy, what with not being sent to actual prison, we had no idea that he had to sleep with one eye open, and take a homemade shiv with him into the showers just to keep himself safe from the other hardened criminals who pose such a danger to society that they're allowed to roam free except at night. But after eight whole months of spending his nights under adult supervision, D'Souza is at least humbled and repentant for his crimes, to which he pleaded guilty:

“The left, by targeting me for selective prosecution, intended to teach me a lesson. But the lesson I’ve learned is, I’m sure, not the lesson the left wanted me to learn,” he said.

Ha, just kidding! He's still convinced as ever that he was the victim of a vast leftwing conspiracy to shut him the hell up and force him to stop making movies and writing books about how Obama sucks. But he gets the last laugh, because he wrote ANOTHER BOOK while he was doing time, coming soon to bookshelves you'll definitely want to avoid.

D’Souza told WND the title of his new book will be “Stealing America.”

“The theme is that we think of American politics as a clash of ideas in that we stand for ‘liberty’ while the left stands for ‘justice’; we stand for ‘freedom,’ they stand for ‘equality,’ and I have spent most of my career debating these ideas,” he explained.

D'Souza was inspired by his anthropological study of the real criminals by whom he was surrounded, but with whom he most certainly did not belong -- "I feel I was put into an environment that I never would normally be in," he said, which is semi-true; he wouldn't have been there if he hadn't committed that felony -- and that helped him to realize something he'd never realized before: he sure does think Democrats and liberals suck. Oh wait, that's been his pitch all along, but it's different now, because of how prison changes a man. And in D'Souza's case, it seems to have changed him into the kind of man who is even more despicable than he was before, which we didn't know was possible.

“So, I began to sit back and look at progressives in the Democratic Party as con artists who aren’t really attempting to achieve a rival view of America, but are attempting to transfer wealth, power and resources away from the ‘haves’ in favor of themselves.” [...]

“I’ve come to understand from my confinement experience that the goal of the Democratic Party, like the hardened criminals I met in the detention center, is to steal the great wealth of America from the private enterprise sector to appropriate to their leftist purposes how that accumulated wealth is allocated, how it gets used and how it gets spent,” he said.

Yup, he sure sounds rehabilitated all right.

We're going to have to agree with our new favorite hero, Judge Richard Berman, who observed, when he denied D'Souza's request for a waiver from his required community service -- because, the judge wrote, "as all criminal defendants are aware, that we don’t provide ‘summer breaks’ in these circumstances” -- D'Souza seems to still have a whole lot of issues he needs to work on in his "required therapeutic counseling."

D'Souza will appear on Fox News -- again -- this Thursday, to talk with Megyn Kelly about all the lessons he refused to learn while he was serving his unfair politically motivated sentence. Because Fox sure does loves its felons. No word yet on whether that interview will be followed by one with fellow convicted criminal and Fox favorite, Mark Fuhrman, to talk about how that thug Dinesh D'Souza probably needed more Jesus and a better dad in his life. But stay tuned!