Harry Reid Finally Sounds Ready to Bust The Filthy Filibuster, So He Will Definitely Chicken Out Again 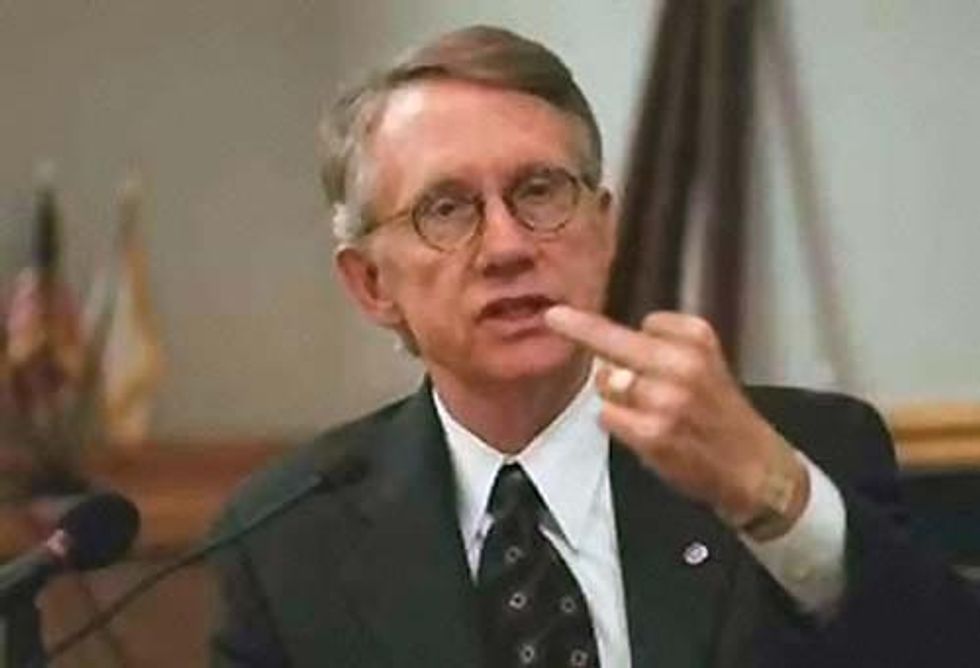 Harry Reid, if you end the filibuster -- or even limit its use such that executive appointments can be a thing again -- you will henceforth be known as The Stormin’ Mormon, by us and whoever wants to join us, unless or until we think of something better. So do it! Don’t just talk about it, do the motherfucker! And don’t back down if Senate Republicans say “OK fine you can have a National Labor Relations Board, jeez.” DO IT! Reid has let us down before, but to his credit he really sounds ready to take the plunge this time:

“Senator McConnell broke his word,” Reid said. “The Republican leader has failed to live up to his commitments. He’s failed to do what he said he would do -- move nominations by regular order except in extraordinary circumstances. I refuse to unilaterally surrender my right to respond to this breach of faith.”

“Is there anybody out there in America that thinks this body is functioning well?”

But the best part of this story, as reported by TalkingPointsMemo, is Mitch McConnell giving quote from his fainting couch:

“Senate Democrats are getting ready to do permanent damage to this body,” McConnell warned, and made a morbid reference regarding Reid. “No majority leader wants written on his tombstone that he presided over the end of the Senate.”

Actually, we think "HE ENDED THE SENATE" would look pretty sweet on our tombstones. SO DO IT!

(OK, fine, we  should also Wonksplain that Reid isn't actually proposing to toss the filibuster altogether; as Politico sez, the change would "narrowly focus on presidential nominees to the executive branch" and the Senate probably can shamble on anyway.)

And yes, we are totally willing to live with the consequences of finding our preferred party in the minority again with no recourse as President Jenna Bush appoints the embalmed head of Ted Nugent to run the ATF. It would suck, but there’s only so much you can do to save people from themselves. And remember, out of the Bush administration’s monumental incompetence came the somewhat less incompetent Barack Obama and like FOUR YEARS of Democrats running the House.

However, should Harry Reid so much as tinker with the filibuster, we anticipate a lot of GOP noise in the midterms about how there’s no stopping them now, they’re going to ram it all down our throats, ramming and ramming and they won’t even stop it when we cry, they like it when we cry, our tears are warm on their... OK, enough of that. In a midterm election in which turnout from the base is critical, this might flip a few seats. Are we willing to live with that? What’s so great about a fully-staffed executive branch, anyway?