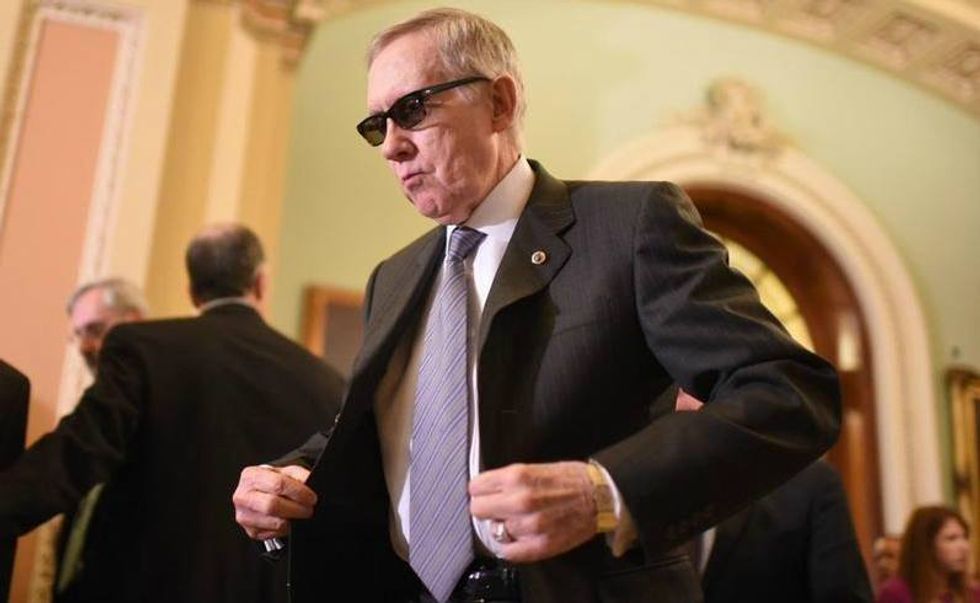 If you are an old who remembers when, you might think Nevada Sen. Harry Reid is an odd choice for Wonkette's Legislative Badass of 2015. Reid became leader of the Senate Democrats at a strange time, for strange reasons. And by strange, we mean super-duper double effed the eff up because it was 2004, and everything was effed. So-called "values voters" had just re-elected George W. Bush and declared that only Republicans have values because they say "God n guns" all the goddamned time, especially when they're giving tax cuts to the rich and burning their Dixie Chicks CDs and  bombing the shit out of Muslim infidels, for freedom.

The former king of the Senate Democrats, some weak-ass weenie from South Dakota named Tom Daschle, had been dethroned and in a lame attempt to prove Democrats have values too, they chose the socially conservative pro-life pro-gun Mormon from Nevada, one Mr. Harry Reid.

We had our doubts, and by doubts, we mean we rolled our eyes SO HARD at the Democrats' weeping woman-holes, so desperate to look just like Republicans, or else the terrorists had won.

Skip forward to right about nowish, and Harry Reid, as king of the Democrats, has turned out to be all kinds of super badass. It's a downright shame Reid announced his retirement earlier this year, especially because the closer he gets to retirement day, the fewer fucks he gives, and it is most excellent. So this here is not merely an award for Reid's legislative badassery, but also a lifetime achievement award for Badassery in Democratic Leadership as well.

Harry Reid Gets His 'No' On

After Republicans seized control of the Senate in the devastating midterm election of 2014, Senate Majority Leader Reid was demoted again to Senate minority leader, but hoo boy how his ball sack grew. Reid, once known for writing Sternly Worded Letters to Republican leadership and then caving and giving them exactly what they wanted anyway, suddenly started saying NO! and NOPE! and NO, FUCK YOU! to Republicans when they tried to, say, sneak anti-abortion malarkey into a previously bipartisan bill on human trafficking. Even when Republican leader Mitch McConnell said mean words about Reid and the Democrats, Reid stood firm and kept saying "See above re: no fuck you," and it worked!

And it wasn't just that stupid human trafficking bill, neither. Earlier this year, Republicans were hell-bent on including Obama Sucks Because Immigration provisions in a bill to fund the Department of Homeland Security. They were willing, or so they said, to jeopardize our national security to Make A Point! because they were quite certain Democrats would continue the tradition of agreeing to be the grown-ups, for the greater good of America, by passing a crap bill in order to protect our homeland. But lo! And no! Instead, Reid and his House pal Nancy Pelosi forced Republicans to give in to them, by eventually agreeing to a funding bill for the Department of Homeland Security without inclusion of the We Hate You All The Hates Obama Act of 2015.

Harry Reid Gets His LOL Funtimes On

In March, Reid announced he was retiring from the Senate to let someone else try to keep Mitch McConnell and the Republicans from blowing the whole U.S. government up with their "ideas." Despite Reid's opposition to legalized prostitution, he was nonetheless tongue-in-cheek invited to hold his retirement party at the renowned Sheri's Ranch brothel, because he'd still improved the lives of sex workers by, for example, supporting Obamacare so that even sex workers could get their parts doctor-checked. Reid never took the organization of sexytime professionals up on its offer -- that we know of (!!!) -- but he sure did have himself a blast giving zero fucks about whatever means Republicans might throw in his general direction.

He had himself many several chuckles about the crazy town conspiracy theories that circulated around the wingnut interwebs about The Real Story behind his New Year's Day face-breaking "accident" with some "exercise equipment." The tinfoil hat-wearers were pretty darned certain what ACTUALLY happened was that Reid got roughed up by some mobster types, because Nevada, and or also too maybe a family fistfight or Obama's thugs or something EVEN WORSE! Reid didn't waste much time correcting the record because he and his whole staff were too busy laughing their assess off about it and playing with poor wingnuts' emotions by adding even MORE rumor fuel to the fire.

And then Reid reallystarted the smack-talking, and it was AWESOME.

On Mitch McConnell, for example:

I don’t mean to be mean-spirited, but he IS a lump of coal. He believes that coal is the salvation of the world. I don’t believe that.

On all the Republicans running for president this year:

You know, I don’t really care. I think they’re all losers.

We concur, of course. And we love the all-out-of-fucks-to-give version of Harry Reid who is so sick to death up to HERE with Republicans trying to undo the good stuff that he's inventing clever new ways to make fun of them for it. Like his proposed amendment in December to the Republicans' gazillionth attempt to repeal Obamacare, which would "would bar gun ownership by those convicted of a misdemeanor under a law designed to crack down on aggressive protesting at abortion clinics."

That is straight up freakin' THE BEST is what that is, especially coming from a guy who rose to his position of leadership because of his conservative "values" on guns and 'bortions. Which is why, among other reasons and glorious moments in epic trolling of terrible Republicans -- Mitt Romney's unpaid taxes, anyone? -- we must give credit to ol' Harry, after all these years, after all. Sure, Democrats wandered and stumbled and tripped and fell and broke their spines and faces through the Dark Times of the Bush years. It was sad. It was awful. It was a terrible time to be a Democrat. Like, more than usual. And sure, we grumbled and groaned at Reid's toothless sourpuss faces and constant caving to GOP demands.

But somewhere along the way, Reid turned out to be pretty not bad at being the boss of Senate Democrats. He even managed to get some real good shit done (Obamacare for the win!) with Nancy and Barack. And he eventually recognized that the old Republican Lite ways of the party were The Suck and that progressivism and populism and Elizabeth Warren are the future of the Blue Team.

And for that, we thank him and so do you.