Hate To Interrupt This FASCINATING Redux Of 2016, But Check Out Dreamboat Joe Kennedy! 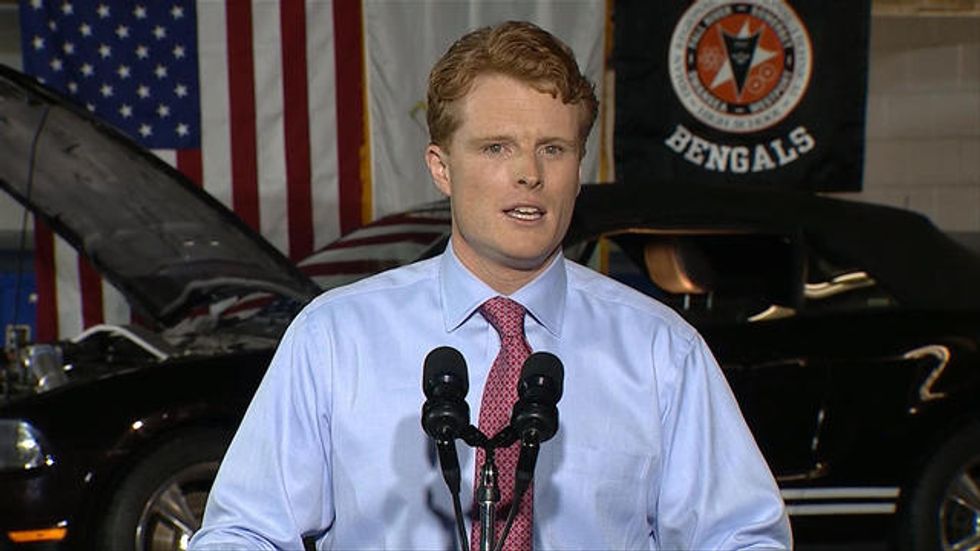 No, we did not watch Trump's SOTU speech! Are you crazy? We write about that asshole all day long, so we knew damn well half would be teleprompter pablum, and the other half dog whistles to the deplorables. Never fear, white Christians in Real America! Your town may be swimming in opioids, and those "clean" coal mines aren't coming back, but Orange Daddy will keep you safe under God by standing for the anthem and killing Obamacare. Cutting immigration might shrink the economy, but at least you won't have no MS-13 members moving into the holler and riding the school bus with your younguns.

Enter Massachusetts Congressman Joe Kennedy, III, who gave the official Democratic response. We admit, when we read he'd been tapped, we thought, "Christ, another white dude!" But you know what? His speech was pretty great. Who better to rebut the party of rich white guys who got theirs and are fighting like hell to keep everyone else impoverished than a rich white guy who stands for the principle that we have an obligation to take care of each other? That those of us who have the most, have the greatest duty to our fellow citizens.

Republicans have turned selfishness into Christian virtue and convinced middle class voters they can only get ahead by starving poor kids. Here's Kennedy, a guy born to wealth and privilege, calling bullshit:

They are turning American life into a zero-sum game. Where for one to win, another must lose. Where we can guarantee America's safety, if we slash our safety net. Where we can extend health care in Mississippi, if we gut it in Massachusetts. We can cut taxes for corporations today if we raise them on families tomorrow.

Where we can take care of sick kids if we sacrifice Dreamers. We are bombarded with one false choice after another. Coal miners or single moms, rural communities or inner cities. The coast or the heartland. As if the mechanic in Pittsburgh, a teacher in Tulsa, and a day care worker in Birmingham are bitter rivals, rather than mutual casualties of a system forcefully rigged towards those at the top.

Because isn't that the great Republican lie? That rich people are "job creators" who deserve to have all the money, and poor people should fight "Hunger Games"-style for the scraps? It's bullshit, and we need to shout it.

And speaking of things to shout, Kennedy laid down a clear marker on DACA:

And to all the Dreamers out there watching tonight, let me be absolutely clear. You are part of our story. We will fight for you and we will not walk away.

Although, he said it in Spanish, so maybe it doesn't count??? No, but seriously, we're taking this as the official party position, CHUCK AND NANCY!

The Republican response to the Democratic response was mostly tweets about Chappaquiddick and snark that Kennedy was wearing too much Carmex, which is about the level of substantive discourse you'd expect from Republicans these days. Why yes, we are rolling our eyes and making the jerk-off motion right now! How did you guess?

So take it from us, a bunch of Hillary-loving neoliberal shills, THE SPEECH WAS GREAT.

Or watch it, whatever.

You bravely say, "Me too." You steadfastly say, "Black lives matter."

You wade through flood waters, battle hurricanes, brave wildfires and mudslides to save a stranger.

You battle your own quiet battles every single day. You drag your weary bodies to that extra shift so that your families won’t feel the sting of scarcity. You leave loved ones at home to defend our country overseas, patrol our neighborhoods at night.

You serve, you rescue, you help, you heal. That, more than any law or leader, debate or disagreement, that is what drives us towards progress.

Okay Democrats! Enough bullshit about 2016. There are nine months until the mid-terms, so get your liberal asses in gear.

Please money us! For salaries and servers and NO ADS!