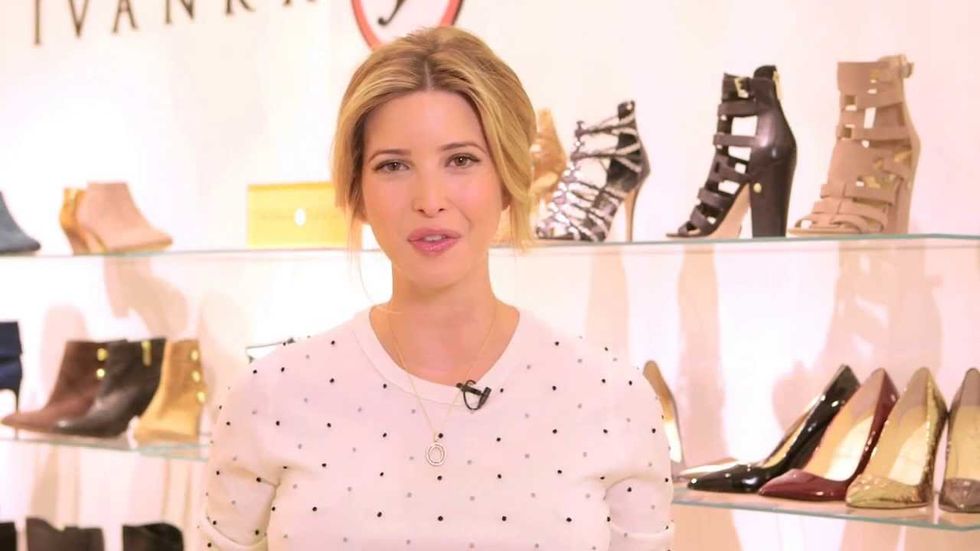 Donald Trump wants to bring manufacturing back to America. He has said it many times, and gotten lots of people very, very excited about it. "Economically Anxious" Americans who for some reason firmly believe that companies are going to come back to America and go from paying workers in other countries peanuts, to paying workers here a living wage just like they used to, without being forced to by unions, which will no longer have any bargaining power if Trump gets his way with National Right To Work.

It is just a thing that will happen, because Donald Trump will yell at them until they say "okay."

And yet, for some reason, Trump and his family cannot be bothered to help spur this trend on their own. So weird, right? Although, if the Trump approach to manufacturing in the US is anything like what the Trump family condones in other countries, perhaps we ought to be grateful.

Earlier this week, it was revealed that an activist who was working undercover to investigate labor rights violations at Huajian International, the company that manufactures Ivanka Trump's shoe line, had been detained by Chinese police on suspicion of "illegal eavesdropping."

Additionally, two other activists also working undercover for China Labor Watch have disappeared. They are missing. They were investigating labor rights violations committed by the company that makes Ivanka Trump's shoes, and now they are missing.

Via The New York Times:

The activist, Hua Haifeng, who was working on behalf of the advocacy group China Labor Watch, was detained on suspicion of illegal eavesdropping, his wife, Deng Guimian, said late Tuesday. Mr. Hua and two other labor activists had been undercover at two Chinese factories that make shoes for Ms. Trump and other brands. They all disappeared on Saturday, according to their employer, China Labor Watch.

They were last seen in Ganzhou, a large city in southern Jiangxi Province. It is unclear whether the other two were detained.

The group had been investigating labor conditions at the two factories, one in Ganzhou and another in Dongguan. Their preliminary findings, which had not yet been made public, detail that workers were subject to exceptionally long hours.

Li Qiang, the founder of China Labor Watch, told the Times on Thursday that he has lost contact with all three activists, and is "very worried about their safety."

Generally speaking, when labor activists go "missing," it's usually not because they are particularly whimsical and decided to take a road trip just for funsies. Especially in a country where labor activists somehow have a tendency to commit "suicide", often under rather suspicious circumstances.

In recent years, China has begun "cracking down" on the activities of labor activists who seek to increase wages and improve conditions for workers. These activists -- like four who were arrested last year -- are often charged with bs crimes like "disturbing social order" and "inciting workers to go on strike."

This crackdown is largely due to the fact that China's economy has slowed as many companies move their factories to places where they can treat workers even more horribly and pay them even less than they do there! Nice!

The Ivanka Trump brand declined to comment on the labor conditions or the activists. In terms of bringing jobs back to the United States, the company said, it was “looking forward to being a part of the conversation.”

Such tensions are fueling the drive of Huajian’s founder, Mr. Zhang [Huarong], to move work to Ethiopia. A former drill sergeant in the Chinese military who sometimes leads his workers on parade-ground drills, Mr. Zhang says work like making shoes will never return to the United States and is increasingly difficult in China as well.

Huajian has actually been manufacturing footwear in Ethiopia -- which has no minimum wage for jobs outside of government, banking or insurance -- since 2012. Not only do they produce Marc Fisher Footwear -- the company that licenses the Ivanka Trump brand for shoes -- but they also manufacture some other brands you may have heard of, like Guess, Naturalizer and (SURPRISE!) Toms. Yeah, you know. The brand that is so fabulously giving that whenever you buy a pair of shoes, they give a pair to a child in need? That Toms. They literally brag about this on their site. And I'm gonna need to note that a pair of their "classic" shoes is $48 which is significantly more than the people who make them earn in a month.

SEEMS LIKE A VERY APPROPRIATE TIME FOR THS GIF.

Now, maybe you are thinking, "Well, perhaps that amount of money is good for Ethiopia! What do we know? MAYBE THEY ARE HELPING, EVER THINK OF THAT?" But here is what one worker told DW.com about working there:

Although Huajian has created many new jobs, the company's employees complain their

wages are too low. "My basic salary is just 600 birr (26 euros) and only when I work 10 instead of eight hours a day I get 750 birr (32 euros) a month, which still isn't enough. My rent alone is already 400 birr," says 24-year-old leather cutter Abu Ibrahim. "Also, our Chinese bosses shout at us in Chinese all the time and sometimes we aren't even allowed to go to the toilet," he adds.

Not so great, as it turns out! Also, although unions are technically "legal" in Ethiopia, workers at Huajian have been fired for attempting to start one.

It sure is nice, though, that the Ivanka Trump Brand is "looking forward to being part of the conversation" when it comes to bringing back American manufacturing! How will that conversation look? Whose job is it to start said conversation, exactly, if not the daughter of the President of the United States, a man who has promised to bring back American manufacturing? How, exactly, will they be seeing their way to making their shoes here in America if China's labor laws and wage demands are too much for them to bear? So many questions!

Exclusive footage of Ivanka's initial proposal for her footwear business.

Just to recap: While Donald Trump is shooting bullshit out of his mouth about how he's going to bring manufacturing jobs back to America, which -- again -- will all magically pay just as well as they used to without being forced to by a union, his daughter is making shoes in a Chinese factory at which activists were either detained or disappeared for investigating labor violations, and will soon be having her shoes made in a Chinese factory in Ethiopia where people are paid significantly less per month than the cost of a pair of the shoes they are making.

And Donald Himself? Well, as we all know, he loves manufacturing things in other countries as well -- in Bangladesh, Honduras, Vietnam and, yes, even Mexico.

These are the people that supposedly "economically anxious" Americans are trusting to bring their jobs back. People who cannot quite figure out how to not make their own shit in sweatshops with extremely sketchy labor issues are the ones who are going to improve things for our American workers and bring jobs back. Yes, that seems about right.

Wonkette pays its writers a living wage -- for Boise and Memphis anyway -- only with the support of Readers Like You. HELP A MOMMYBLOG OUT.