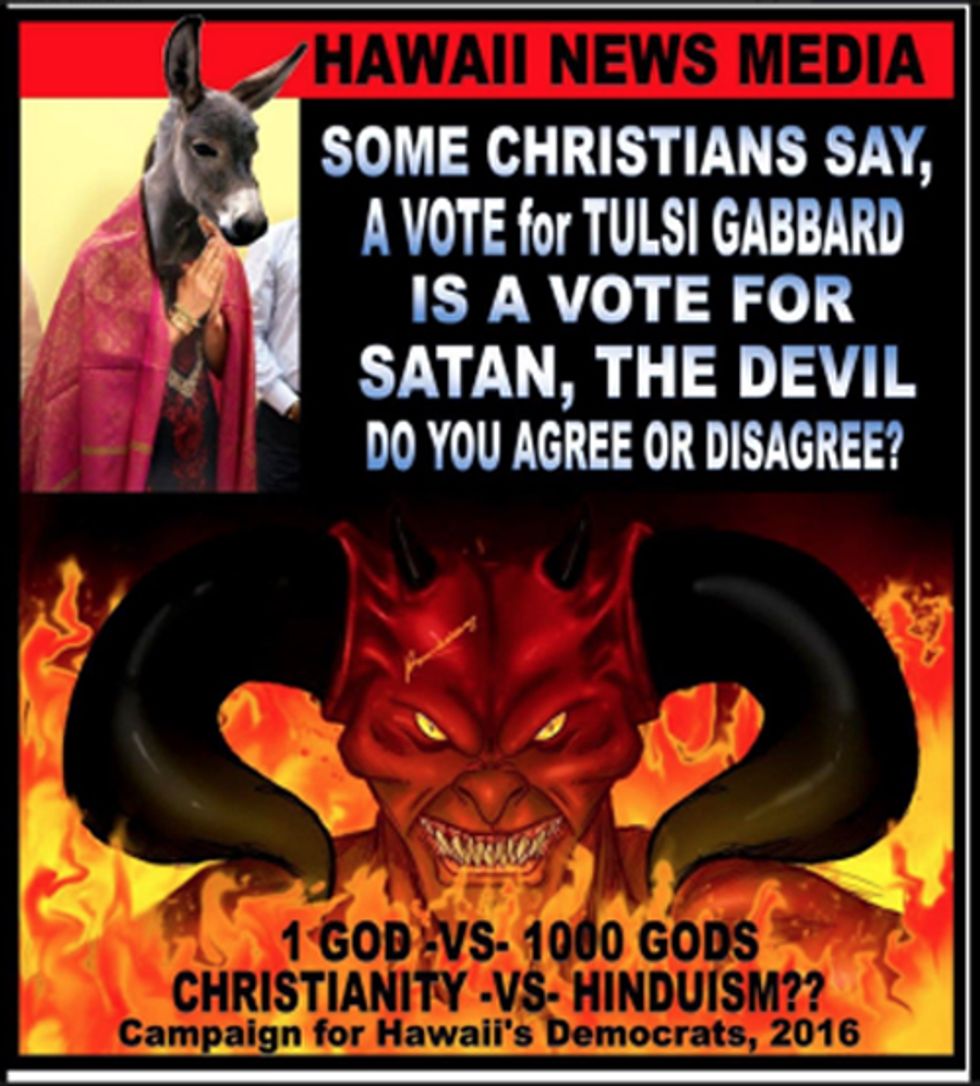 'Some' sure say a lot of stupid shit, don't they?

As we mentioned a couple weeks back in your Senate Sunday, Hawaii is in general such a blue, blue state that Republican candidates don't really have much of a chance at the polls -- so much so that a ridiculous number of Democratic candidates for the state legislature are running unopposed in the fall. So it shouldn't be too much of a surprise that the person who won the GOP primary nomination to run against very popular U.S. Rep. Tulsi Gabbard turns out to be too out-there even for the state party, which has disavowed her after she ran a Facebook post accusing Gabbard and fellow Democrat Colleen Hanabusa of being actual demon worshipers.

The now-deleted Facebook post by GOP nominee Angela Kaaihue included the image above, and was accompanied by a press release calling Hawaii a "Devil Democratic State" and, for good measure, included a rant against Japanese-American Gov. David Ige, whom she appears to blame for some kind of land dispute she's involved in. Why Gov. Ige? As far as we can tell from a different Facebook rant which we won't pretend to understand, her neighbor is of Japanese ancestry, so OF COURSE Gov. Ige is to blame, because the Japanese are all in it together. The press release promised that if "Gov Ige and his Japanese constituents" would settle, then she'd drop out of the congressional race:

“Then Hawaii, YOU can have YOUR so-called ‘perfect’ pathetic Hindu 1000 GODS leader along with YOUR pathetic ‘career politician’ Buddhist Hanabusa, and your pathetic American Traitor, And my family and I will go our merrily way,” Kaaihue said. She also ridiculed Gabbard’s “moon-crater cheeks.”

Gabbard is Hindu, Hanabusa is Buddhist and Ige is Japanese-American. Kaaihue is a Christian running on a platform based on instilling religion in government.

Yeah, we can see why the state GOP might want to distance itself a little from that. State chair Fritz Rohlfing issued a statement Friday saying Kaaihue was No True Republican:

As Chairman of the Hawaii Republican Party, I want it understood by the general public and the media that the recent inflammatory comments made by candidate for Congress (CD2) Angela Kaaihue do not represent the views, values, or the sentiments of our Party and its members. Her vulgar, racially-bigoted, and religiously-intolerant descriptions of Democratic Party candidates are offensive, shameful, and unacceptable in public discourse. I unconditionally denounce her despicable statements. I strongly urge all Hawaii Republicans to join me in disavowing her candidacy.

Kaaihue didn't take that particularly well, filling her own Facebook comments section with denunciations of the state GOP, naturally enough:

The biggest liar and deceiver is Satan, the Devil. To call one a racist bigot, when they have taken over our America, GOD's Country, and while most people do nothing, and allow it to happen, YOU are guilty for NOT standing up for GOD. The biggest liar to call one a Racist Bigot! Take a stand for GOD, Christianity is the birth religion of America.

You 'attack' the "messenger of God", you identify and take on the mark of the beast. Repent and beg GOD for forgiveness, you have sinned! The road to life is narrow, the road to destruction is broad! Your Judgement day is near once again! Let "Thy Kingdom Come". YOU will be judged!

Be sure you bow all the way down to your hands and knees, and kiss her feet like they do in some cultures! Repent, and you shall be saved!

She also offered a new, fascinating meme to get her point across:

If nothing else, it looks like Kaaihue is ready to get that ABBA cover band off the ground. In a phone interview with the Honolulu Civil Beat Saturday, Kaaihue -- a fervent supporter of Donald Trump, you'll be astonished to learn -- explained that by condemning her, the state party chair had sold out both God and America:

Kaaihue said there was a war going on between “the righteous and the unrighteous, between God and Satan.” Rohfing’s denouncement of her candidacy, she suggested, demonstrated “how we are being deceived by Satan, the biggest liar and deceiver.”

She said Rohlfing needed to “be careful” because he was taking on “the messenger of God.”

“‘Angela’ means messenger of God,” she said. “My whole family is Christian.”

Ms. Kaaihue has had a number of run-ins with the law, including a 2013 case in which she was convicted of harassing a Honolulu Police officer; she was given probation and ordered to have a mental health exam, which found her "fit to proceed," at least in the court. Kaaihue insists the officer had actually threatened her, and accused the entire Hawaiian judicial system of being rigged against her:

The judge, she said, ordered the mental examination because he objected to her speaking in Hawaiian in court.

“The judge, the cop, almost all the court reporters, the prosecutors, they are Japanese,” she said. “They are racist; they have a samurai code.”

Asked about her ethnicity, Kaaihue said she did not want “to get into it. But I am not Japanese.”

Ms. Kaaihue's ethnic and religious appeals to voters are not likely to win her much support in Hawaii, a proudly diverse state where religious affiliation is lower than the U.S. average. We were somewhat surprised to learn that Hawaii does have a higher percentage of Mormons (5.14%) than the nation as a whole (2.03%); our guess is that people sent on missions there accidentally forget to come back.

We wish Ms. Kaaihue peace and aloha, and would note only that if she does in fact have battles with mental illness, it is nothing to mock her for. But it's not very funny when Christianists, mentally healthy or not, want to throw the rest of us into a volcano.