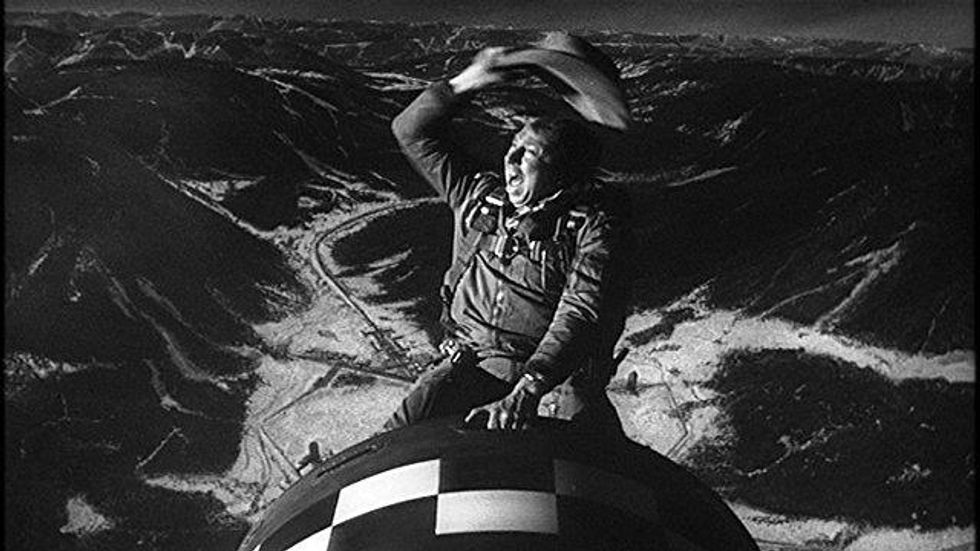 You mean we're not goin' to-to-toe with the North Koreans? Oops.

A funny thing happened in Hawaii Saturday, if you're talking about funny-strange and not funny ha-ha. Seems that, as the Hawaii Emergency Management Agency (HIEMA) later put it, an employee "pushed the wrong button" during an emergency drill, and accidentally sent out a little text message (and automated alert that interrupted TV and radio broadcasts) that was very badly in error, telling everyone in the islands that the missiles were coming and that they were all about to be flash fried in a rain of nuclear devastation; please take shelter, kiss your ass goodbye, and thank you for choosing Verizon:

Not surprisingly, the "THIS IS NOT A DRILL" part resulted in a lot of folks losing their precious bodily fluids, in their pants. Hell, hours later in Idaho, we turned on the TV and felt a moment of horror in the brief moment between seeing a copy of the text message and realizing the anchors were talking about a mistake.

Worse, it took another 38 minutes before HIEMA was able to send out a second, corrected, alert from the same system to tell everyone that the first alert had been in error. Before that went out, several officials, including US Rep. Tulsi Gabbard and people from state government, posted Tweets saying it was a false alarm, and police used the loudspeakers in their patrol cars to say everything was OK, but HIEMA didn't have an option to send everyone an "oops, never mind" message, which was one of the first things they fixed in their alert system.

According to HIEMA Administrator Vern Miyagi, here's what went wrong: During a routine drill that happens after shift changes, an employee didn't so much "push the wrong button" as click on the wrong option on a computer in the emergency operations center, selecting an emergency alert template that sent a live emergency notification to the public instead of the template used for drills, which would only send out a test message in the ops center. CNN techsplains,

The officer responsible accidentally clicked yes, Miyagi said. At that point, the message -- "BALLISTIC MISSILE THREAT INBOUND TO HAWAII. SEEK IMMEDIATE SHELTER. THIS IS NOT A DRILL" -- was sent to Hawaii residents and vacationers. It also went out to televisions and radios.

So clicking "yes" on the confirmation -- probably without reading what the confirmation popup actually says, because for godssake you've done this drill a million times -- is where things went screwy. That's whatcha call your human factors failure there (Wired has a nice detailed look at how Hawaii's emergency alert system works, or didn't this time).

Miyagi told CNN that HIEMA has already taken steps to address some of the problems Saturday's false alarm revealed. For one thing, the emergency alert computer system has had a false alarm message pre-loaded into the system so that in case of another error, the state can immediately send an all-clear. Beyond that, for both drills and a live emergency, a manager in the emergency operations center will have to give approval before any message is actually sent.

The poor schlub who clicked on the wrong message and scared everyone in an entire state into running helter-skelter for parking garages and storm drains in which to hide their children hasn't been fired, but has been disciplined and reassigned. We actually feel bad for the employee, since god knows we've clicked "publish" instead of "save" a few times. But obviously Hawaii -- and all the other states using the emergency alert system -- need to review their procedures to avoid such screwups, like having more than a two mouse-click separation between the system used for drills and the live alerts. You really want to be sure the texts saying WHOOPEE WE'RE ALL GONNA DIE only go out when they're absolutely necessary.

As Wired notes, there also appears to be some blame to be shared with the federal government -- if the White House can launch actual missiles within minutes of a radar alert, then it ought to have a quick way of getting word out to residents of a state after an error, too. FCC chief Ajit Pai has promised an investigation of what went wrong, but we'll assume in advance that he'll determine nothing went wrong on the federal level, and that the whole thing could have been avoided if we let cable companies run the emergency systems.

Donald Trump is also expected to help matters by Tweeting more insults at North Korea, golfing, and telling the press corps that a lot of people don't know this, but Hawaii is actually a state, even though it's surrounded by big water.

Update: Darn it, we hate when we forget to include a perfectly cromuent joke, so here goes: Sarah Huckabee Sanders may have inadvertently discovered how the erroneous missile warning was sent:

There, that's taken care of.