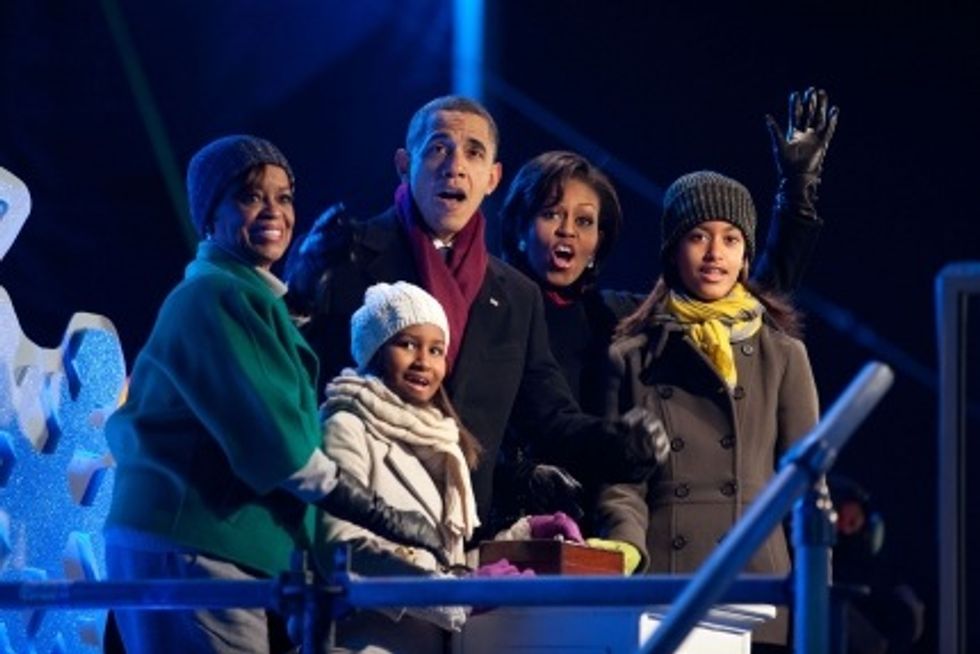 Barack Obama said "Merry Christmas" THREE times last night,at the lighting of the National Christmas Tree (we only need one?). That seems like a lot for a Muslim atheist, but in reality, it proves he's morally weak. Not only did Obama say this phrase; he also allowed a minister to deliver an invocation at this most sacred event, at which America comes together to mark the occasion when the hungry babyjesus ate an entire Douglas-fir full of electronics and light bulbs in one sitting. There were four applause breaks during this ceremony: one for Obama's children and their grandmother, one for his dog, one for the hip-hop artist Common, and one for the tree. There were not any for Obama, because of the whole morally weak thing.

and of course, thanks to Common and all of tonight’s performers for joining us here as we light the National Christmas Tree for the 88th time. (Applause.) [...]

On behalf of Malia, Sasha, Michelle, Marian -- who’s our grandmother-in-chief -- (laughter) -– and Bo -- don’t forget Bo -- (applause) -- I wish all of you a Merry Christmas and a blessed holiday season.

And now I’m going to invite the entire Obama crew up here to help me light this Christmas tree. (Applause.)

All right, everybody, we’re going to count from five -- five, four, three, two, one.

That dog has a real shot at taking on Obama in the primaries. A real shot. The people love him. Probably going to happen. [LA Times]