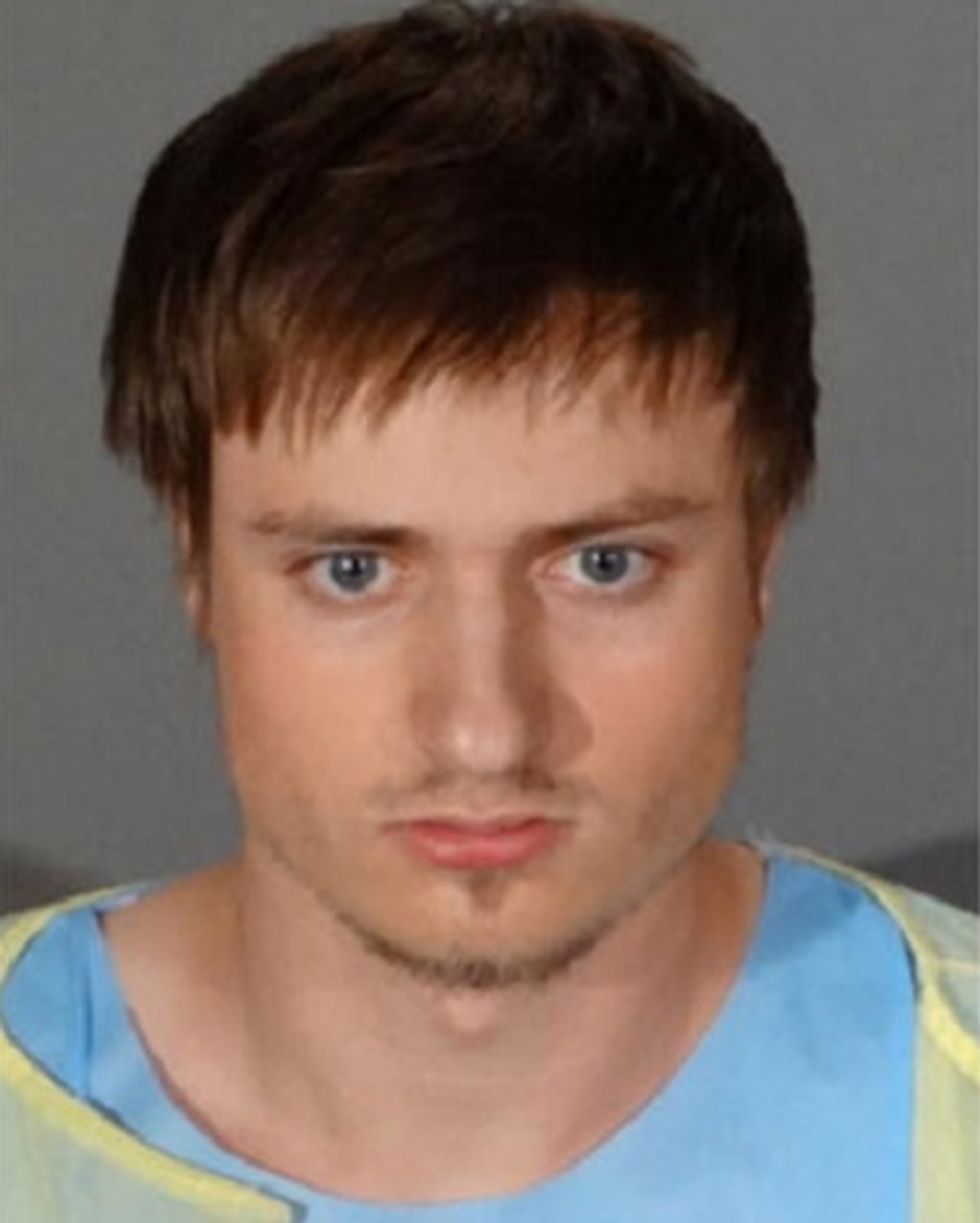 He's not a Muslim, so let's not worry too much OK?

After the massacre in Orlando Sunday, we at least won't have to worry about the gun-toting NRA supporter who was arrested on the other coast, because maybe he was just a Responsible Gun Owner who happened to have an arsenal in his car, and we don't even know for sure he was planning any mayhem at Los Angeles's Pride celebration at all. There, we feel better already.

Santa Monica police arrested James Wesley Howell, 20, of Indiana, early in in the morning Sunday after receiving a call about a possible prowler who was knocking on someone's door and window.

A law enforcement source who spoke on condition of anonymity said the contents of the bucket included Tannerite, an ingredient that could be used to create a pipe bomb. The maker of the material said that was not the case and that it can only be detonated by high-velocity impact such as a bullet strike. But Tannerite is known as a material used in the construction of other types of explosive devices.

Tannerite is commonly used in exploding targets for recreational shooting; misuse of the powder has also been blamed for several forest fires, and in gun fun incidents like that one in March 2016 when a Georgia gentleman stuffed an old lawnmower full of Tannerite, shot it, and blew his own leg off.

Howell told police Sunday morning he was looking for a friend and that he was on his way to L.A.'s Pride parade; Santa Monica police initially tweeted that Howell confessed he intended to "harm Gay Pride event," but later clarified the tweet was incorrect; Howell had only said he was going to the parade but hadn't made other statements about his plans. So really, maybe Howell was simply a heavily armed guy who planned to go to the parade, then later do some target shooting/forest fire setting/leg blowing off later on.

Police said they have not yet located the friend Howell said he intended to meet at (or before) the Pride parade, and that there is no evidence to suggest any connection to the Orlando shooting.

At a news conference Sunday afternoon, police stressed they were still trying to figure out what Howell planned to do with the weapons.

Greeson said Howell’s family in Jeffersonville hadn’t seen him for days and that his parents had called Greeson’s parents looking for him.

So maybe Howell was a bit of a hothead; he'd done some crimes, with guns, and shouldn't have had any guns at all, but somehow ended up with guns anyway, imagine that:

According to Indiana court records, Howell was charged in October 2015 with intimidation and felony pointing a firearm at another person. On April 19, Howell pleaded guilty to misdemeanor intimidation, and prosecutors dropped the charge of pointing a firearm. Court records show he was sentenced to a year in state prison and placed on probation. Under the deal, He agreed to forfeit all weapons during his term of probation.

As to why he was driving to California in June and not in prison, your guess is as good as ours; the Indianapolis Star reports that three days after his guilty plea in Indiana,

Howell was indicted in Jefferson Circuit Court in Kentucky on charges of fleeing or evading police and reckless driving, according to court documents. Howell is scheduled for a hearing in that case next month. Further details about that case were not immediately available.

So he never surrendered his guns, was indicted on evading police in another state and not held even though he had a guilty plea in Indiana, and then spent a couple months roaming around somehow. You might almost get the impression there were some law enforcement slip-ups in both Indiana and Kentucky.

In the October incident in Indiana, Howell reportedly pointed a handgun at a neighbor; two witnesses to that incident also

referred to an incident earlier in the day in which Howell had pointed his gun at his boyfriend [...]

“James is going to get someone hurt,” one witness said. “He needs to stop pointing guns at people.”

Hey now, what part of "Shall Not Be Infringed" don't you people understand? Now, before we get all judgmental about young Mr. Howell, let's keep in mind that his friend Joseph Greeson said that not only did Howell not have any ill feelings toward gays or lesbians, he was also bisexual, so let's not worry too much about all the weapons and ammo and explosives and camouflage clothing found in his car. It would also be irresponsible to draw any conclusions from his car's NRA-logo license plate holder, which featured the slogan "Teaching Freedom," or from his now-deleted Facebook post

in which he compares Hillary Clinton to Adolf Hitler. In another, he repeats conspiracy theories that the government was behind notorious terrorist attacks, including Sept. 11, 2001. That post shares a video claiming that last year’s terror attack on the Paris offices of the satirical magazine Charlie Hebdo was a hoax and attributable to the “New World Order.”

Nothing happened, he doesn't appear to be an Islamic radical, and let's not make too big a deal about guys who've agreed to turn in their guns traveling around for a couple months with no apparent law enforcement attempts to stop them. On the other hand, you may want to buy more guns yourself, since there are dangerous Muslims out there.