HELP! Ivanka Trump Is Being OPPRESSED! 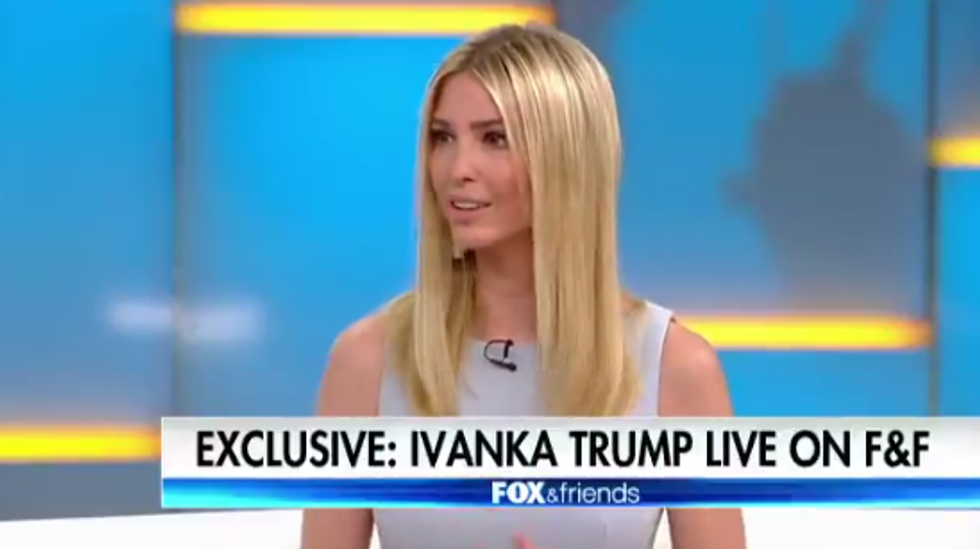 Ivanka Trump had a very nice morning! She, the New York fashion socialite person, got to visit with Her People, by which we mean the idiot couch at "Fox & Friends." It was a nice interview! She lied only several times! But the part that's making news about Ivanka's interview is that she is sad about how mean everyone is to her and her beloved daddy :(

After telling a normal human being story about how she brought her daughter Arabella to her sister-in-law Lara's baby shower and Arabella didn't understand because she thought it was a literal shower, like with water (which is a common kid mistake!), Ivanka said this:

WATCH part one of @IvankaTrump's exclusive interview on @foxandfriends. pic.twitter.com/DLMlxoxLYI

Oh no! Who is being vicious to Ivanka Trump and making things Not Easy for the family that makes its money off grifting, much of which is possibly illegal? Is it Wonkette? Like right here, in our viral and beloved seminal work on the subject, called "Oh Go Fuck Yourself, Ivanka Trump"? Maybe it was that time Wonkette said Ivanka is kind of bad at fashion, because she is.

Maybe everybody is being vicious because the narrative around Ivanka is that she's this liberal, level-headed character capable of pushing back against her dear old dad's most disgusting and hateful policies, but the reality seems to be that she's not capable of influencing shit.

Or maybe everybody is being so vicious because Donald Trump is an incompetent, autocratic shit who has no respect for American laws and institutions, who barely squeaked into office because of an antiquated quirk in the American electoral system, and whose approval rating is hovering around 34%, because of how he is a liar who sucks. Maybe Americans are really disturbed by how there are multiple investigations into the possibility that the Trump campaign somehow colluded with Russia to influence the outcome of the election, since Russia is (SPOILER ALERT) not our friend.

Parts of the interview weren't terrible. Ivanka said that, coming directly after the hugely successful Infrastructure Week, which literally nobody is talking about (except Goldman Sachs CEO Lloyd Blankfein, who is trolling Donald Trump HARD about it), it is now time for job growth week, and at points she sounded like a common Hillary Clinton, talking about the need for job training and skills-based education for the jobs of TODAY, as opposed to the jobs of yesteryear. But don't worry, all them coal jobs are comin' back, we're sure her daddy has a real plan for that!

On the other hand, as the Washington Post notes, Ivanka also gave bullshit answers about the James Comey testimony and reports that her be-dimpled goon husband Jared is always fighting with Steve Bannon. She didn't deny it, but she didn't NOT deny it either.

But anyway, the point is that Ivanka is sad about how vicious everybody is, but she is strong, so she will survive, just like a common Job being tested by a needy God.

So we guess we'll just say it again, even if it means we are being vicious again like a common Wonkette: Oh go fuck yourself, Ivanka.