Help Them, Ted Cruz, You're Their Only Hope 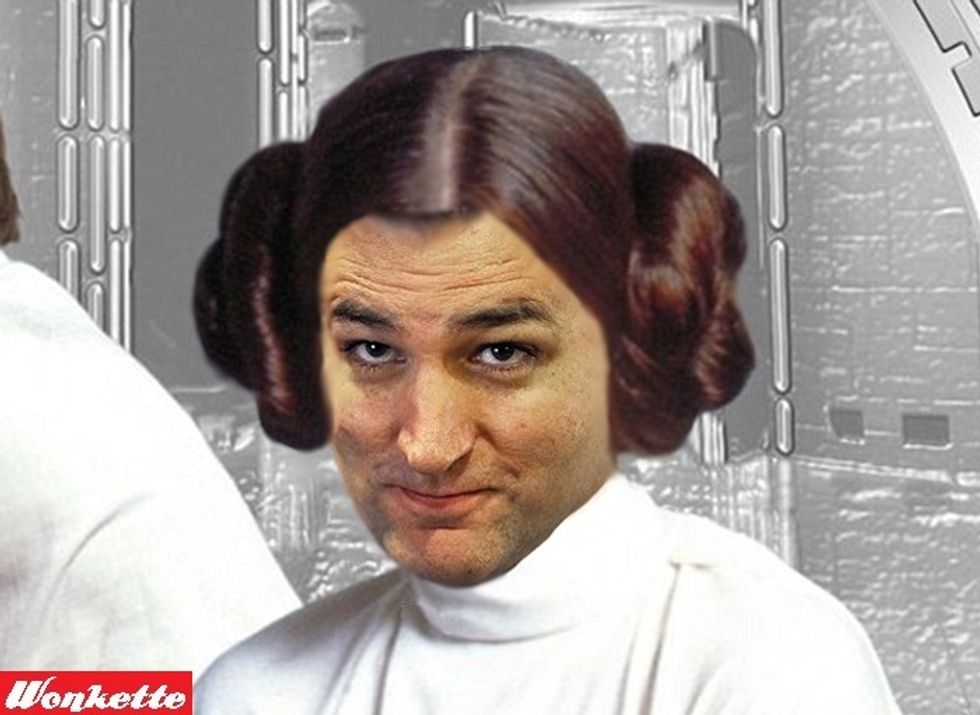 Will someone get this big walking carpet off the debate stage?

Now that the national political media has gotten good and tired of hearing Donald Trump give the same stump speech again and again (while waiting around for him or his fans to finally shoot someone at a rally), it's time for another installment in the Horserace Narrative. We had the brief rise and subsequent disappearance of Carly Fiorina, then the prolonged National Eye-Roll at Ben Carson, and now that Ted Cruz has polled slightly well in Iowa, it's the Senator from Alberta's turn to spend a little time in the "This One's Not Trump" spotlight.

And so we are treated to some serious political think pieces explainering why Ted Cruz may be the nominee, even though everyone in the Republican establishment hates his greasy Canadian bacon filled guts. The think-piecing goes something like this: Nobody in the GOP establishment likes Ted Cruz, because he's a dick who puts personal political gain over party unity or even keeping the government running. But compared to Donald Trump, Cruz is at least recognizable as a conservative who'd act like a Republican, albeit one of the free-range loco-weed huffing ones. Or as Vox's Matt Yglesias puts it,

[Republicans] may find that even if they don't like Cruz they can live with him. As a nominee, the absolute worst Cruz could do is lose. As president, Cruz would govern in line with congressional Republicans' policy preferences. Donald Trump, by contrast, risks being a total fiasco as nominee and could be even more damaging if he managed to win the election. And for all of Cruz's many flaws, there is serious reason to believe that he could do a better job than anyone else in the field of stopping Trump.

Over at New York magazine, Jonathan Chait looks at Cruz as the more-or-less tolerable intermediate option who might be acceptable to rabid Trump supporters who paint themselves red, white, and blue and go hopping around naked on all fours, and Marco Rubio supporters who like a nice bland neocon whose last name isn't Bush:

Cruz may find himself best positioned to bridge the gap, and well positioned to win a three-way race divided along these lines. Should Trump falter, pro-Trump border hawks would probably prefer Cruz to Rubio, who tried to shepherd immigration reform through the Senate. And should Rubio falter, Rubio’s supporters would find Cruz a more predictable and disciplined Republican partisan than the erratic Trump.

And so, as they say in the Shire, Wallah! Ted Cruz is the perfectly adequate rightwing bowl of porridge that the flaming loonies and the respectable money guys can all grudgingly agree on, and what the hell, maybe enough people will believe that months-old fake story about Hillary Clinton scissoring Yoko Ono that they'll go for the smarmy assface from Canada? It could totally happen! (Don't Worry, Reince Priebus, Mummy's Looking for some Electoral Votes in the Snow.) (Or, for your less completist Ono fans, we'll just go with it's a Double Fantasy!)

[contextly_sidebar id="IAoDx0dWDHfG8icYNWBp66ZrsJ1VpFft"]The Trump campaign isn't especially worried; having been married to a succession of Eurotrash gold-diggers, Donald is not scared of small, yappy, ankle-biting Accessory Dogs. Still, Donald at least felt compelled to take the defensive measure of deriding Cruz on Sunday Talk TV, Trumpsplaining that Cruz lacked the "temperament" and "judgment" to be president, a statement that resulted in an explosion and fire at the National Center for the Study of Irony. Trump explained further that Cruz comes off as "you know, frankly, like a bit of a maniac," except not in the good way that Donald Trump does.

Well aware that Twitter is Trump's native tongue, Cruz replied by Tweeting out a popular music video of the 1980s, to make it clear that he knew Donald was only funnin' him:

Trump's campaign manager, Corey Lewansowski, followed up Sunday with another dismissal of Cruz, in a statement that deserves a place in the Dan Quayle/George W. Bush Big Book Of Political Quotes:

And so the Battle of the Republican Intellects staggers ever forward.