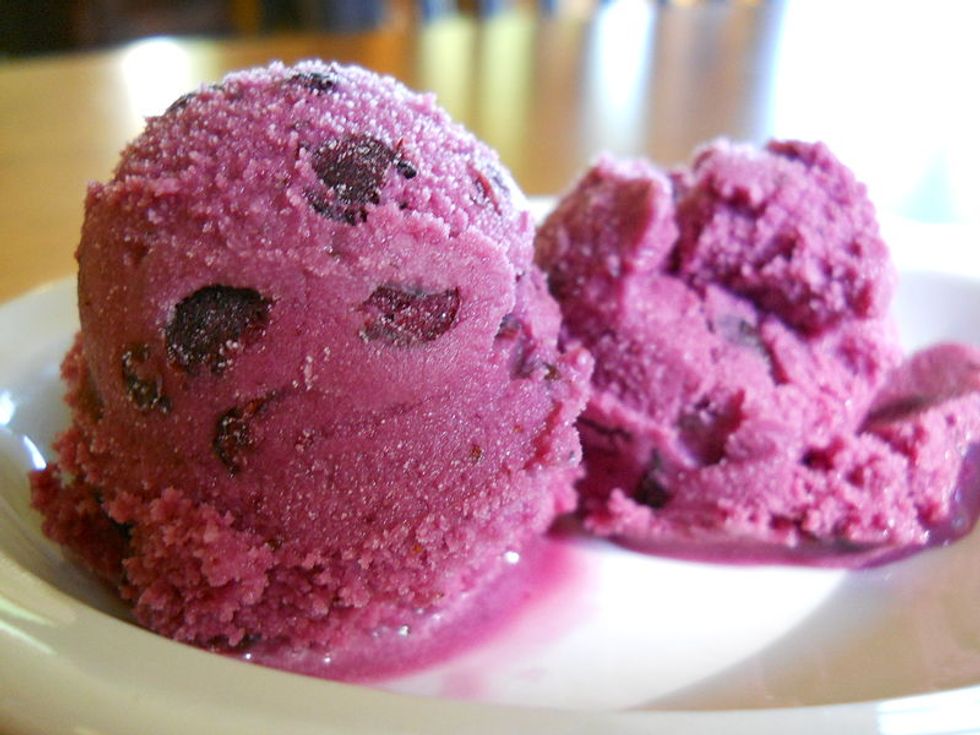 ByMindmatrixWelcome back to Off The Menu, where we bring you the best and strangest food stories from my email inbox. This week, we bring you something different from our usual happy, cheeky fare: well and truly horrifying restaurant stories. As always, these are real emails from real readers.

I was a shift supervisor at a busy college coffee shop for 18 months. There were plenty of problem customers, but one always stands out as the absolute worst. He was one of those grad students who acted entitled to everything; for example, he would routinely complain that there was no room in the cafe to sit, despite camping out for hours when he did eventually get a seat.

We also had a small but troublesome set of homeless people hanging around the area, and they factor into the worst interaction I had with this awful customer. One warm afternoon, a patron came in from our patio to let me know that one of the more incoherent homeless men had urinated in his chair outside. I went out, asked the man to leave, and promptly threw the chair away. Par for the course, unfortunately.

Mr. Awful came in about 30 minutes later, obviously wanting to commiserate about the incident. "Man, I can't believe that just happened," he said. I didn't want to engage in a conversation about it so I shrugged it off and said it was no big deal. Then he says, "I mean, at some point you have to admit that some people need to just die. Where's the benefit?"

I took a deep breath and told him that I was glad he wasn't responsible for those kinds of decisions and walked to the back office. I was never able to deal with him again.

I've been a bartender for about 10 years. I don't know if it's the booze or the fact that I'm friendly, but some customers feel it's okay to cross the line with bartenders.

I worked at an Irish-themed bar for a while. The uniforms were slightly more modest than tilted kilts, but only ever so slightly. On a slow night, an older man came in, and right off the bat tipped me 18.50 on a 1.50 beer. That should have been a clue that things were about to get weird, because it seems the creepiest customers usually tip well.

I thanked him for the generous tip, and attempted to make small talk. He began telling me some of the mob history of our city (and there is plenty), and I found it actually interesting. During this conversation, he kept reaching into his wallet, pulling out fives or tens, and putting them into his hand. Then he would grab my hand, like giving me a handshake, slipping me the bill. I only had two other customers at the time, so of course I was going to give this guy my attention to keep the tips flowing. After about $60 in tips, and only $5 spent on drinks, his conversation started turning creepy. It started innocently enough, asking if I had a boyfriend. I said I did, and he then asked if my boyfriend kept me happy. I said yes, but kept asking the same question, all the while tipping in the same weird way. I started catching on to what he was really asking, but played dumb so it didn't progress further. Finally he asked, loudly, if my boyfriend went down on me, although crudely. I told him that was none of his business, and went to take care of my other customers. Even for that kind of money, my threshold for creepers is pretty low.

After a few minutes, he walked over, apologized, and pulled out a 50 dollar bill, once again putting it in his hand as if to slip it in mine during a handshake. He went to shake my hand as an apology, and I took it. Big mistake. He grabbed my hand, tightly, and pulled it towards his pants, almost yanking me over the bar in the process, yelling "bet your boyfriend doesn't have one THIS big!" As I struggled to pull my hand out of his grip, one of my other customers, who happened to be a semi-pro boxer, stood up and, in a quick move, jabbed the creeper on the side of the head. Creepy guy went limp, and fell. One of the other customers had called the police, and they had already arrived, and seeing the guy lying on the floor, began trying to arrest the regular who had defended me. I explained what happened, and the creeper started getting up, yelling that since he had paid for my time, he was allowed to touch me. "THIS AIN’T THE STRIP CLUB, I CAN TOUCH HER IF I WANNA" he yelled. The cops cuffed him and took him away, after warning my regular customer to let them handle it next time.

Bonus: when cleaning up later during closing time, I found a crumpled $50 bill on the floor by where the commotion had happened.

The scene: spring of 2012, and I, a lowly sandwich artist. The most memorable story from the thousands of greasy interactions started off with a quiet older gentleman. I think his name was George. Now, George would come in a few times a week, and he would mostly mind his manners. Sometimes his hand would linger a bit too long when I would try to make change, or he'd wink at me pervertedly, but I put that off as typical slightly sexual harassment. However, one bright afternoon George came in not to buy a sandwich, but purely to waste my time. He asked me: 1) When I work next, 2) if I'd be willing to drive him across the state, and 3) if I had recently cut my hair (answers were: "1) Um, I'm not sure exactly, 2) I def can't drive you across the state, I have work/school in the indefinite near future, and 3) yes, thank you … "). To make things more awkward, I'm still putting handfuls of olives onto some misguided soul's sandwich the whole time he is asking me these totally inappropriate questions. Before he fully understood Hungry Lady's GTFO glare, he had one last parting remark that haunts me to this day.

George cheerfully said, "I hope you work this coming Sunday … I've noticed you work here most Sundays … I'm going to bring my camera with me. I need to get a picture of your eyes -- so green! I'm going to frame them on my wall."

I'm not sure exactly what I said since all the blood in my body rushed to my face in embarrassment, but I'm pretty sure I ended the transaction with Hungry Lady, said goodbye to George (because I'm stupidly polite), and then ran into the back to hyper-ventilate. The one good thing that Subway management ever did for me was they made sure George knew entirely how unwelcome he was at the store from then on out. I never saw him again, thankfully.

When I was 19 I worked at a family-owned pizza place in a suburb of Chicago. Every Sunday during football season, we would be packed with people watching the Bears games. One Sunday, I was working in the bar area when an older man and two mid-twenties men (grandpa and grandsons) walked in and sat in my section. After talking to them and getting their drink order, I determined grandpa was wasted. He was yelling about how he wanted to order something we didn't have on the menu, and we should accommodate him because he is an AARP member (wtf?). By this time his grandsons were looking everywhere but at me, and I could tell they were mortified. I walked away to grab their drinks from the bar window, and when I came back and dropped off their drinks grandpa decided he had a change of heart about how terrible of a waitress I was. To prove this to me he got down from the high-top bar chair, came around behind me, firmly grabbed me by my shoulders, and humped me like a dog.

At this point, his grandsons intervened and I ran to the back and cried my eyes out that an old man had just humped me. My manager told me it wasn't that big of a deal and I shouldn't be so upset. I had to go back and serve them for the remainder of the football game and act like nothing happened.

I was working at a drink stand at an outdoor concert venue one Sunday morning. It was a kids/family concert, so business was mind-numbingly slow. Just as the concert is winding down, a disheveled dude shuffles up and orders a beer. He looks OK, but after he gets the beer, he stumbles away, clearly drunk. All of us in the booth decide to cut him off and we let security (off duty police in full uniform hired by the venue) know to keep an eye on him.

Fifteen minutes later, we see the police swarm the guy. He'd tried to grab a nine year old girl's chest, but was too drunk and missed, falling into a tree. The police arrested him pronto and ran his name. Turns out he had an arrest warrant issued for molestation of another kid. He left in the back of a squad car and hopefully went to jail for a long time.

A little more than a decade ago, I worked at a TCBY in the deep South while in college. After being there for about six months, I'm scheduled to close with another girl. 10 PM rolls around, we kill the lights, pull the toppings, and empty the froyo machines. Near the end of our cleaning routine, she heads in the back to handle the register while I stay out front to mop. A pearl white Escalade with gold trim pulls up to the drive-thru. The lights inside the store are completely out except for the one in back (including the drive-thru menu), but the teenage boy driving doesn't take a clue and pulls forward to the window. I unlock it, smile, and tell him I'm sorry, we're closed. SOP for this regularly occurring event. I try to close the window, but he starts ordering. I apologize again, tell him we're closed and let him know the hours tomorrow. His teen girl passenger just stares at me.

Thinking this is over, I close the window. He flips the fuck out, screaming F-bombs, slamming his hand into the steering wheel. It's such a tantrum that I actually take a step back. Unsure what to do, I back away with my mop and start edging to where my coworker is for advice and a witness to this epic meltdown. He pulls around front to the locked double doors. As my coworker comes out to see what the noise is about, he flings himself at the front doors. He's pulling at them, actually getting them to crack a bit, screaming "fuck you, you fucking bitch, I'm going to fucking rape you!” I have completely frozen. All I can think, mop in hand, is “dude, it's just yogurt. It's just yogurt!” My coworker sprints to the back, yelling at me to get his tag, she's calling the cops. He has nearly forced the door at this point, and must have heard, because he flees back to his SUV and peels out. Cop arrives, takes statements, escorts us to our cars after we call management to let them know what happened.