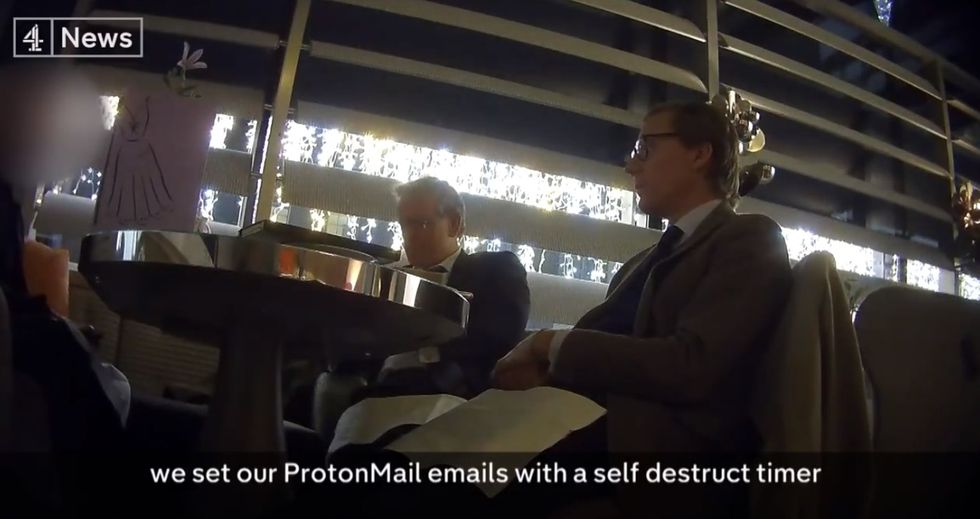 UH OH, it is British TV O' Clock again! After the last Cambridge Analytica report from Channel 4 in the UK was released on Monday, it led to bloodshed and mayhem and a whole lotta people in Congress saying "WHOA HEY WHOA HEY," even Republicans! And all the while, we knew that, come suppertime in England, we'd have a new installment of Channel 4's sex-clusive investigation, and oh boy, here it is!

Oh bollocks, how do you say "sad trombone" in British? Is it "WHOMP WHOMP WHOMP AND ALL THAT ROT"? Wonkette's sources say it definitely is.

We don't know if Nix was suspended just for saying he likes to use Ukrainian hookers and bribes to ratfuck candidates (which Cambridge Analytica said he ONLY SAID to make sure the fake Sri Lankans interviewing him didn't want to do naughty things like that) or it's stuff from this newest video that just dropped. (Or both!)

Let's look at the new video, which focuses on CA's activities for the Trump campaign, and see what it do:

First of all, you should know that Alexander Nix takes all the credit for Donald Trump's disgusting campaign and undemocratic "win." ALL OF IT.

We did all the research, all the data, all the analytics, all the targeting, we ran all the digital campaign, the television campaign, and our data informed all the strategy.

And Alex Tayler and Mark Turnbull of Cambridge Analytica got even deeper into explaining how that idiot Donald Trump couldn't have won without CA's voodoo:

TAYLER: When you think about the fact that Donald Trump lost the popular vote by three million votes, but won the Electoral College, that's down to the data and the research.

TURNBULL: He won by 40,000 votes in three states. The margins were tiny.

The Channel 4 narrator explains that, when the Trump campaign hired Cambridge Analytica, the campaign was completely fucked. It was the billionaire Mercers, who funded CA's American project, who said "you have to hire our company, and you have to hire our guy Steve Bannon, whose gin-soaked ass is literally on the board of our dungeon of internet ratfucking." So Trump followed orders, because at heart, he is such a beta cuck.

And they did it for him! And Russia did it for him! Maybe CA and Russia worked together on some stuff! Waiting for Trump's tweet saying the company his campaign hired to ratfuck the election is a Democrat hoax made up by Democrats to explain why they lost an election they should have won in 5 ... 4 ... 3 ... 2 ...

The CA guys went on to explain how they did the dirty work for Trump, creating Crooked Hillary ads that ran outside the confines of the campaign:

TURNBULL: The brand was "Defeat Crooked Hillary." You'll remember this, of course. [Wait, Donald Trump didn't make up that nickname ALL BY HISSELF? - Ed.] "Crooked Hillary." And the ... "OO" of "crooked" were a pair of hand-cuffs. And it was all about, she belongs behind bars. [LOCK HER UP! - Ed.] And then we made ... hundreds of kinds of creative, and we put it online.

They just stuck 'em online. And they brag that 30 million people watched their videos, YAY! Because of America's fucked up system, where outside groups can push these things without being part of the campaign technically, CA laundered this stuff through a super PAC called Make America Number 1, which was controlled by ... wait for it ... The Mercers!

Of course, it's no matter whether they broke a million laws or not, because Mark Turnbull knows who covers its tracks really well, and it is Cambridge Analytica:

Sometimes you can use proxy organizations who are already there. You feed them. They are civil society organizations. Charities or activist groups, and we use them – feed them the material and they do the work. We just put information into the bloodstream of the internet and then watch it grow, give it a little push every now and again over time to watch it take shape. And so this stuff infiltrates the online community and expands but with no branding – so it’s unattributable, untrackable.

God ... that sounds like ... Russian bots. Wonder if Cambridge Analytica is BFFs with any Russian bots! Bet they at least get Christmas cards! (From Russian bots.)

Back during the late days of the campaign, a senior Trump campaign idiot bragged about how they had a special voter suppression campaign, to make people who hated Donald Trump at least stay at home instead of voting for Hillary Clinton. Turns out Cambridge Analytica had ads for that, too! Here's a still from one of those ads:

Channel 4 interviewed Hillary Clinton for this video, and she said she is curious, just like we are, how the Russians got sooooooo good at targeting just the right places in America in their social media suppression campaign. How they know that stuff? Could it be ...

Or was it just Cambridge Analytica?

As the report nears a close, Channel 4 notes that special counsel Robert Mueller has asked Cambridge Analytica for all its emails and communications during the Trump campaign, and now-suspended CEO Alexander Nix is caught on camera saying FUCK THAT:

I'm absolutely convinced that they have no jurisdiction. [If asked about their work for the Trump campaign] we'll say "none of your business."

And besides, Nix explains they ain't got no records, because they use ProtonMail, which destroys emails after two hours anyway, and for that reason, "there's no evidence, there's no paper trail, nothing." In other words, LONG HAIR DON'T CARE.

Nix cackled like an evil genius, noting that his interview before the House Intelligence Committee was a total joke. (We'll rate that as FACTCHECK PROBABLY TRUE.) He says the Republicans didn't care, the Democrats didn't understand, and besides, Donald Trump wasn't actually pulling any strings in his own campaign, he was just Cambridge Analytica's puppet.

Which is funny, because Hillary Clinton said Trump was a puppet during that one debate, but Trump responded "NO PUPPET NO PUPPET YOU'RE THE PUPPET," and besides Hillary was talking about Trump being Russia's puppet and he is definitely not that either, heck no, you betcha ... oh wait, Trump talked to Vladimir Putin today and congratulated him on his very real Russian election victory this week? Guess he's still Russia's puppet too.

You heard it here first: Donald Trump is such a puppet he can take TWO HANDS UP HIS ASS AT ONE TIME.

And on that note, this is your open thread.