Here Are Your 'Winning' Bradlee Dean Pix 'N Lawyer Letters (You Win Nothing!) 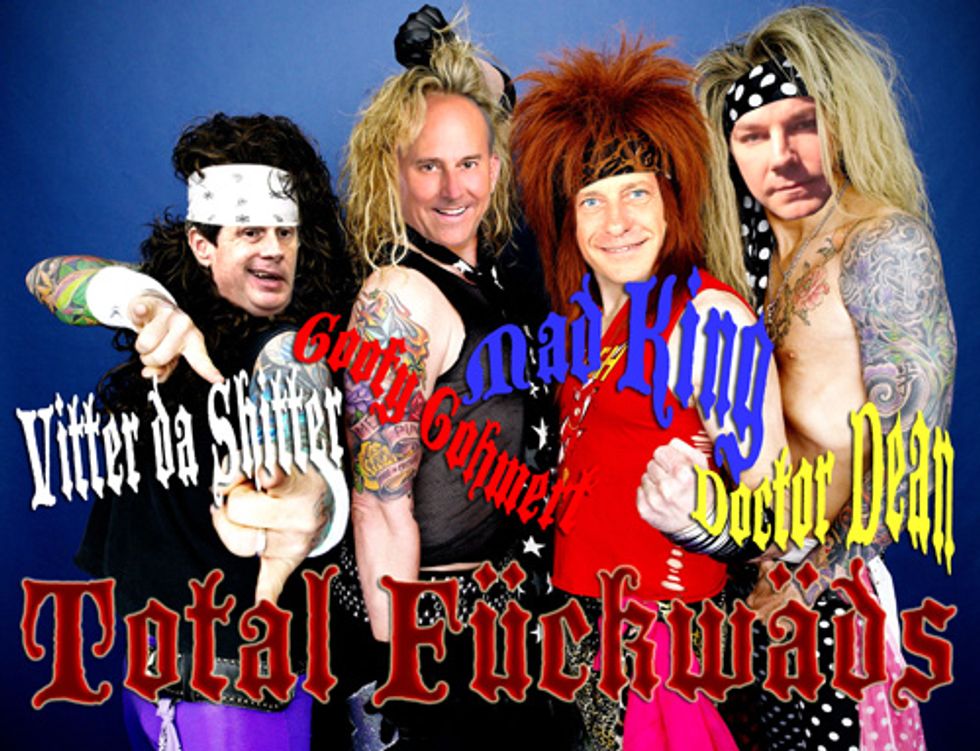 After we received a delightful phoney-baloney legal threat from Expert Showman Bradlee Dean's assistant lickspittle, just because we supposably "defamed" Dean by directly quoting him, we asked you, the Wonkettariat, to show us your fauxto chops and serve us up some manipulated images, for Comedy! We also asked you to prepare us some lawyerly replies to the underling's Nastygram. And did you ever come through!

Our winning entry, above, is by "Muhammed_PBUH," who will receive a brand-new Wonkette "Rod of Correction" Edition M1A Abrams Main Battle Tank, perfect for home or office use. More exciting Pix 'n' Letters after the jump!

All of the runners-up tied for second place, and win an "Obamaphone!"

"Mojopo" had "breaking news" for us:

"jb" gave us a weeping eagle AND a weeping Jesus in the background of this he-man (that's uncapitalized, so suck it, IP lawyers):

Dean Booth animated a cover from City Pages, and added some Wonkette swag:

"Btwbfdimho" played off the name of Dean's "ministry." Too soon?

"MK" consigned Bradlee to the realm of fantasy; frankly, we're a bit worried that this one will result in a Cease and Desist letter from the firm of Thingol, Thingol and Pengolodh:

Yr Own Dok Zoom wasted a half hour trying to fit Brad's dumb face into a Megaman thing before realizing he was going about it backward:

And "iburl" gave us a veritable Rogue's Gallery of recurring characters from the Legion Of Dumb:

And then there were the letters!

They were all incredibly good, and almost all too damn long to quote in full because you people are such profligately prolix propagators of prosody, but let's note some highlights.

We were blown away by the folksy "Xmas Family Letter from a Meth Freak" stylings of "malsperanza," whose opus actually required 2 comments:

Please convey to Mr. Patrick T. Tierney Attorney At Law our pleasure in being introduced to him. It’s always swell to meet new people, and we hardly know anyone in Minnesota, except Mr. Jesse Ventura, and he probably doesn’t live there anymore. We note that Mr. Tierney, Super Lawyer, specializes in “defending manufacturers in lawsuits arising out of exposure to asbestos,” among other noble activities. We have heard that Shakespeare once said, “First thing we do, let’s kill all the lawyers,” probably because his wife or boyfriend was suffering from mesothelioma or silicosis after working in asbestos removal, and got screwed out of a settlement by some ambulance-chasing shyster, but hey, that hasn’t happened to us, so the hell with that.

We here at teh Wonket (Gloria in excelsis!) engage in a type of humor known as "snark" in perpetuum. It is our modus operandi. Ipso facto, lis pendens brought by "Ratt wannabe," mala fide, shall be ignored per se, in extremis, in extenso, sine cura, pro bono publico because said "Poison fail" is an insufferable prick...

"ibnyamin" went from Brad to verse:

Which prompted your reaction. We are most

Amused that you don't understand

The first amendment. Your confused demand

Allowed us to make fun of Bradley Dean

In two more posts. We really hope you mean

To file the threatened suit so we can write

Another diatribe in his despite...

"FlownOver" noted the Hustler v. Falwell precedent, and went on to another key problem involved in any claim for defamation:

More problematic to your case, though, is the prerequisite of a reputation that can be damaged. Have you actually met him? Our biggest tactical issue will be whether to question him as a witness or just offer him as an exhibit.

"DerrickWildcat" went for the Gravitas:

you spell your name wrong and

SO IS YOUR FACE!

and "Supremectjester" noted that the Ultimate Reply had already been written back in 1974:

Finally, in case anyone was wondering, the gif up top was based on this madness. As they say on YouTube, who needs drugs when we have Japanese TV?

Thanks to all the entrants! Everyone is a winner! Except for that sad little preacher man in Minnesota and his legal team.

Check out Wonkette on Facebook and Twitter and even on Tumblr. And if you are surprised by the lack of Ponies in this post (but you shouldn't be, because Ponies are awesome and Bradlee Dean is not), you can follow Doktor Zoom on Twitter, also, too.