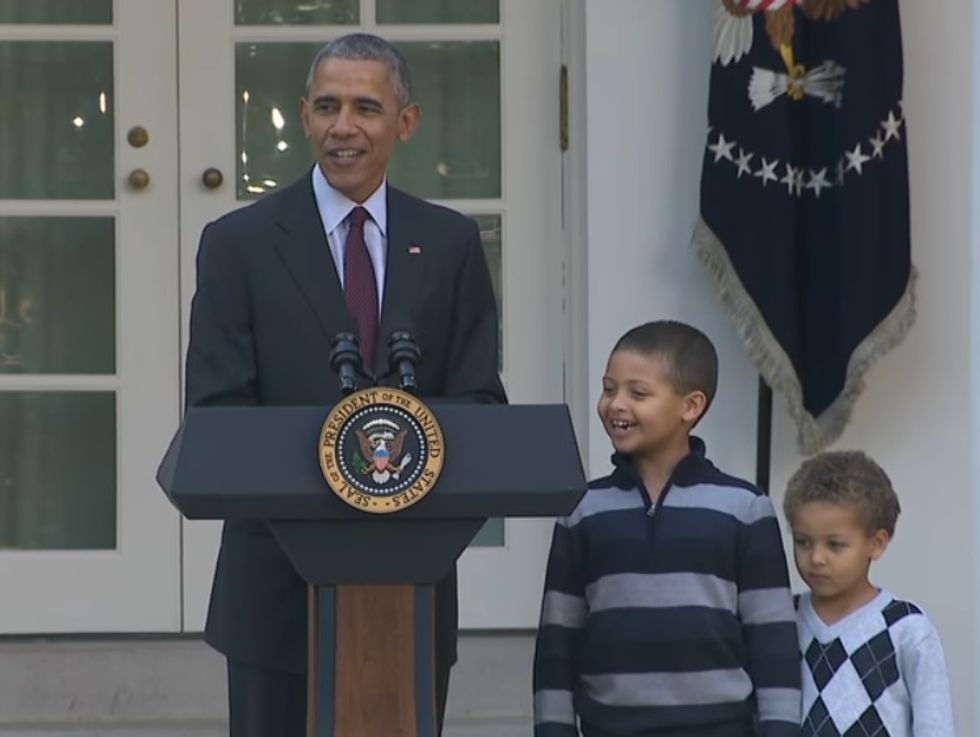 Here for your seasonal enjoyment is President Obama doing his very last official presidential turkey pardon Wednesday, with two of Michelle's nephews, Austin and Aaron Robinson, standing in for Sasha and Malia, who are just plain Over It. The dad jokes are even worse this year, and Barry is clearly having too much fun. Text? You want text? Fine:

THE PRESIDENT: For generations, Presidents have faithfully executed two great American traditions: issuing a proclamation that sets aside a Thursday in November for us to express gratitude, and granting pardons that reflect our beliefs in second chances. And this week, we do both. (Laughter.)

Of course, Thanksgiving is a family holiday as much as a national one. So for the past seven years, I’ve established another tradition: embarrassing my daughters with a “corny-copia” of dad jokes about turkeys. (Laughter.) This year, they had a scheduling conflict. (Laughter.) Actually, they just couldn’t take my jokes anymore. (Laughter.) They were fed up.

THE PRESIDENT: Fortunately, I have by my side here today two of my nephews -- Austin and Aaron Robinson -- who, unlike Malia and Sasha, have not yet been turned cynical by Washington. (Laughter.) They still believe in bad puns. They still appreciate the grandeur of this occasion. They still have hope. (Laughter.)

Malia and Sasha, by the way, are thankful that this is my final presidential turkey pardon. What I haven’t told them yet is that we are going to do this every year from now on. (Laughter.) No cameras. Just us. Every year. No way I’m cutting this habit cold turkey. (Laughter and applause.)

Good one. That was pretty funny. (Laughter.)

Thanksgiving is a chance -- (laughter) -- to gather with loved ones, reflect on our many blessings, and, after a long campaign season, finally turn our attention from polls to poultry. This year, we’re honored to be joined by two of the lucky ones, who were raised by the Domino family in Iowa: Tater and Tot.

Now, Tater is here in a backup role, just in case Tot can’t fulfill his duties. So he’s sort of like the Vice Turkey. We’re working on getting him a pair of aviator glasses. (Laughter.)

And it is my great privilege -- well, it’s my privilege -- actually, let’s just say it’s my job -- (laughter) -- to grant them clemency this afternoon. As I do, I want to take a moment to recognize the brave turkeys who weren’t so lucky, who didn’t get to ride the gravy train to freedom -- (laughter) -- who met their fate with courage and sacrifice -- and proved that they weren’t chicken. (Laughter.)

THE PRESIDENT: Oh, it’s not that bad. Now, come one. (Laughter.)

Of course, we have a lot to be thankful for this Thanksgiving. Six straight years of job creation -- the longest streak ever. Low unemployment. Wages are rising again. Inequality is narrowing. The housing market is healing. The stock market has nearly tripled. Our high school graduation rate is at an all-time high. And our uninsured rate is at an all-time low, thanks to the 20 million more Americans, including millions of children, who finally know the security of health insurance. (Applause.) That's worth gobbling about. (Laughter.)

Proud families across the country are finally complete now that marriage equality is the law of the land. And there are many families of service members who had empty chairs at the table in recent years but who on this Thanksgiving can celebrate with our brave troops and veterans who we’ve welcomed home.

Thanksgiving is also a reminder of the source of our national strength -- that out of many, we are one; that we’re bound not by any one race or religion, but rather by an adherence to a common creed, that all of us are created equal. And while accepting our differences and building a diverse society has never been easy, it has never been more important. We are a people that look out for one another and get each other’s backs. We keep moving forward, defined by values and ideals that have been a light to all humanity.

We have to see ourselves in each other because we've all got families we love, and we all have hopes for their better future. And we lose sight of that sometimes, and Thanksgiving is a good time for us to remember that. We have a lot more in common than divides us.

The holidays are also a time when it’s even more important to reach out to those who need a helping hand. I believe we’re judged by how we care for the poor and the vulnerable, the sick and the elderly, the immigrant, the refugee, everybody who’s trying to get a second chance. I believe that in order to truly live up to those ideals we have to continually fight discrimination in all its forms and always show the world that America is a generous and giving country.

We should also make sure everyone has something to eat on Thanksgiving -- of course, except the turkeys, because they’re already stuffed. (Laughter.)

THE PRESIDENT: (Laughter.) So, later today, the Obama family will participate in our traditional Thanksgiving service project. And when somebody at your table tells you that you’ve been hogging all the side dishes and you can’t have any more, I hope you respond with a creed that sums up the spirit of a hungry people: Yes, We Cran. (Laughter.) That was good. (Laughter.) You don’t think that’s funny? Look, I know there are some bad ones in here, but this is the last time I’m doing this, so we’re not leaving any room for leftovers. (Laughter.)

Let me just say one last thing before I spare these turkeys’ lives. On this Thanksgiving, I want to express my sincere gratitude to the American people for the trust that you’ve placed in me over these last eight years and the incredible kindness that you’ve shown my family. On behalf of Michelle, and my mother-in-law, and our girls, we want to thank you so very, very much.

And now, from the Rose Garden, Tater and Tot will go to their new home at Virginia Tech -- which is admittedly a bit Hokie. (Laughter.) They’ll get to live out their natural lives at a new facility called Gobblers Rest, where students and veterinarians will care for them. And so let’s get on with the pardoning because it’s Wednesday afternoon and everyone knows that Thanksgiving traffic can put people in a “fowl” mood.

What, you people say we're missing another Thanksgiving "tradition" this year? Fine. There really is no avoiding it, is there? Here for purposes of comparison, is your 2008 Sarah Palin Turkey Massacree in five part harmony and full orchestration, although she may not even deserve it, having not even earned herself a Trump administration job as Secretary of Anything that she can quit after two years.