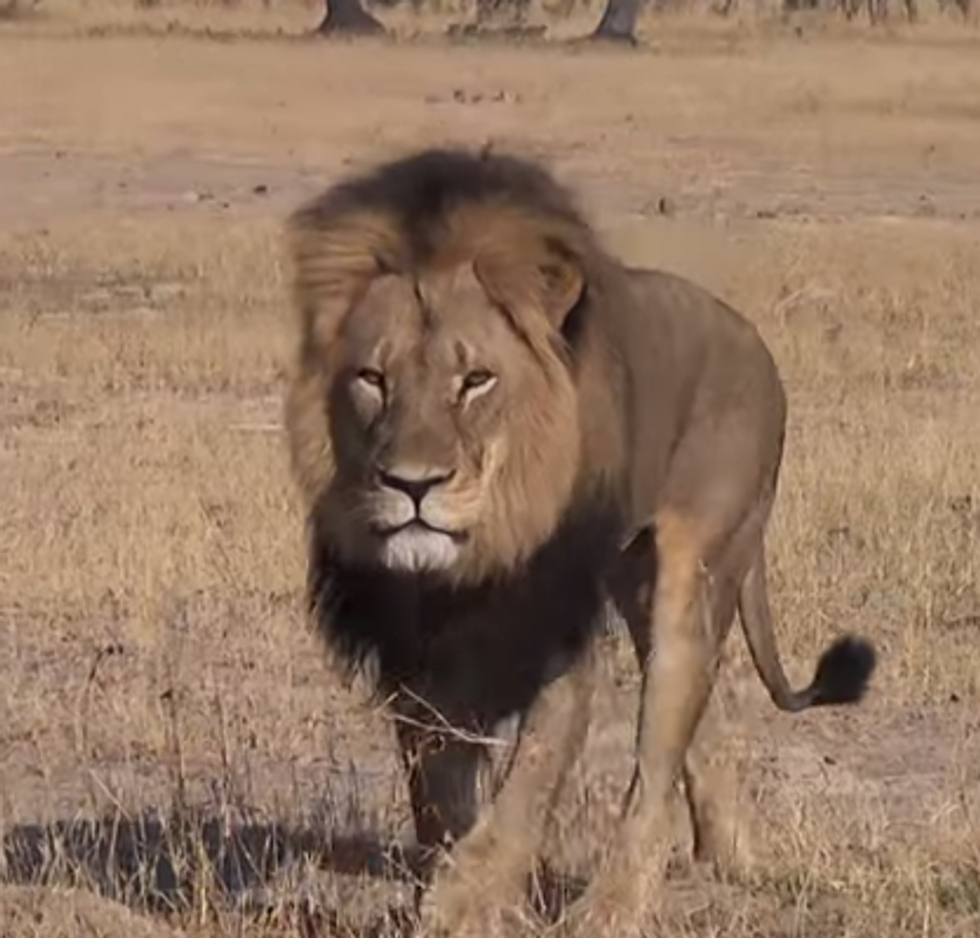 Didn't we just say recently that we are not against hunting? We did say that, and it is still true, but let us clarify real fast. It's one thing to hunt in that real Native American way, where you use the whole animal and you respect that it gave its life to feed, nourish, clothe you and whatever else. It's even one thing to be a redneck from Mississippi (hey y'all) and go out early in the morning and kill a deer, as long as you bring us deer meat or invite us over for deer chili. But it is a whole different goddamn thing to be a piece of trash American who travels across the globe to find new, exotic animals to murder, for no reason nobler than the fact that you really have a hard-on for murdering animals, you sick fuck. Introduce yourself to Walter Palmer of Minnesota:

Cecil the lion – the most famous creature in one of Zimbabwe's national parks – was killed by an American hunter who has boasted about shooting a menagerie of animals with his bow and arrow, The Telegraph can reveal.

Walter Palmer, a dentist from Minnesota, is believed to have paid £35,000 to shoot and kill the much-loved lion with a bow and arrow. The animal was shot on July 1 in Hwange National Park. Two independent sources have confirmed the hunter's identity to the paper, which has also seen a copy of the relevant hunting permit.

Conservation groups in Zimbabwe reacted angrily to the news that the 13-year-old animal had been killed: partly because the lion was known to visitors and seemingly enjoyed human contact, and partly because of the way in which he was killed. He was lured out of the national park and shot.

And Palmer is like "oh yeah that was probably me, I am a badass who actually travels around the world spending the money I make from being probably a bad dentist on murdering animals so I can make up for whatever happened to me in my childhood to make me a bad person."

So, at issue -- because hunting of lions is legal under certain circumstances in Zimbabwe -- is the fact that the professional hunter Palmer hired, Theo Bronkhorst, allegedly lured Cecil, a collared lion, off the property of the national park where he lived so that he could be murdered to satiate the American's bloodlust right and proper. According to a statement from Zimbabwe National Parks:

"All persons implicated in this case are due to appear in court facing poaching charges.

"Both the professional hunter and land owner had no permit or quota to justify the offtake of the lion and therefore are liable for the illegal hunt."

Bronkhorst said he didn't know this was a famous lion which people loved, guess he just thought it was some loser lion named Norm or something.

The Telegraph points out that Dr. Palmer's website says when he's  not being a dentist, you'll find him anywhere he can "photograph wildlife," which is probably a bit of a stretch, unless his iPhone has some kind of fancy "discharge bullet" app on it.

So what happens now? Oh, probably more lions will die, but this time it will be baby lions, and all because this creep American dentist got the itch:

Dr Andrew Loveridge, one of the principal researchers on the [Wildlife Conservation Research Unit at Oxford University, said] that Cecil and another male lion named Jericho led two prides with six lionesses and a dozen young cubs, and he feared for the safety of the cubs now Cecil had been killed.

"Jericho as a single male will be unable to defend the two prides and cubs from new males that invade the territory. This is what we most often see happening in these cases. Infanticide is the most likely outcome," he said.

Cool story. Here are some pictures of Dr. Palmer with some other animals he's killed:

Loser. The UK version of the Huffington Post reports that people are leaving mean reviews on Dr. Palmer's Yelp page about what a shitty human being he is, sadface, hope it doesn't hurt his career or anything.