Here's Barack Obama, A Real President, Reminding YOU To Sign Up For Health Insurance 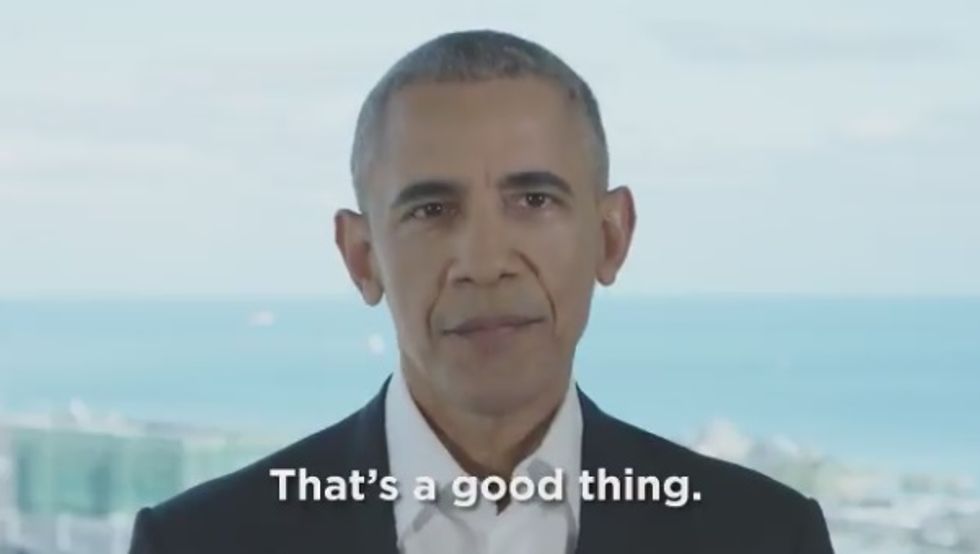 Today’s the day! You can go to https://t.co/p8DQwo89C7 and sign up for health coverage. Need a pep talk first? @BarackObama has you covered. pic.twitter.com/78DAFgUV77

Here's sexxy smart President Barack Obama, looking very relaxed, to remind everyone that today is the start of open enrollment for the Affordable Care Act at Healthcare.gov. Obama made the Twitter ad (GO RETWEET IT!) as part of a nonprofit effort to offset the Trump Administration's 90% reduction in advertising for the ACA. It's just nice to see Barry again, isn't it? We really like the way he uses the actual English language and says things that are factual without even interjecting "believe me" at all, but we're sort of elitist that way.

The Obama Government-in-Exile now has a health insurance education division.

We were pretty excited -- though sad to see it was necessary -- when we learned that a plucky band of veterans of Obama's Health and Human Services department had formed the group Get America Covered to help make up, at least in part, for the Trump cuts in promoting ACA open enrollment, but we were still a little surprised today when our Twitter feed brought us this PSA featuring our most recent Real President. It's even cooler than John Flansberg and John Linnell showing up to sit in with your They Might Be Giants tribute band.

The Washington Times notes that Obama "didn’t mention his role in passing the 2010 health law [...] nor did he bother to remind viewers who he was," because perhaps he assumes we're not idiots. But let's get this on the record: That's Barack Obama there, who was president and pushed through a health reform that covered tens of millions of Americans and led to record-low uninsured rates.

Get America Covered isn't just relying on Barry, though -- they're also hoping people will retweet the ad, and then sign up. And beyond that, the policy wonks at Get America Covered WANT YOU to help with the open enrollment push: They're asking for volunteers to start or join "Get Covered Street Teams," with nifty downloadable posters, handouts, flyers, and detailed talking points (PDF download link). Want to sign up to go be an Open Enrollment Super Soldier? Here's the link!

Over a million fewer people will sign up for the ACA this year due to advertising cuts. Trump considers that a good start.

The Trump administration is trying to discourage ACA enrollment this year by cutting the enrollment period to just 45 days, from today through December 15 (and they're taking the Healthcare.gov website offline for much of the day Sundays, for "maintenance") But they shouldn't be allowed to get away with it, and we can't afford to just sit at our computers and be sad. Go get yourself involved, get the printer humming, and get promotional materials in front of the eyeballs of people who need to see it, at libraries, community centers, laundromats, and such. There is not a moment to be lost!

Yr Wonkette is supported by reader donations. Click here to pay our writers, keep the servers humming, and feed Wonkette Toddler. And if you have a few extra bucks to kick in, Get America Covered would appreciate the assist.