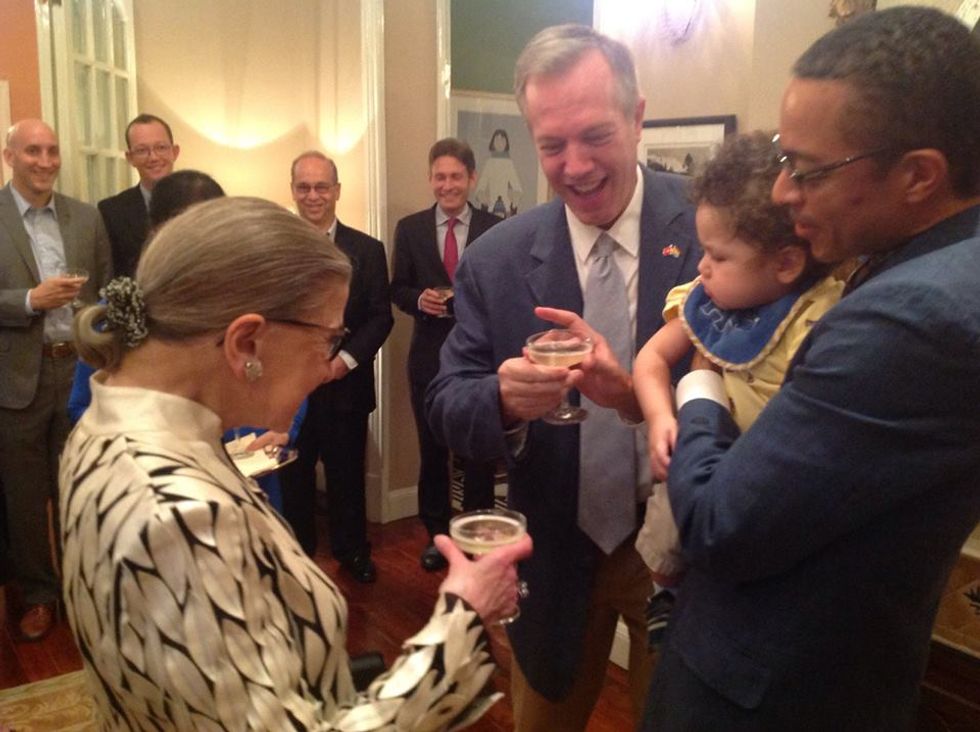 She helped the American ambassador to Vietnam renew his gay vows to his husband, because she DOES THINGS LIKE THAT.

We've all been wondering what Justice Ruth Bader Ginsburg -- AKA The Notorious R.B.G., AKA the biggest baddest Supreme Court superhero to ever don a robe -- has been doing ever since she did her part to do gay marriage to the entire United States of America. The answer, of course, is more gay stuff, same as before! Ginsburg was just hanging out in Vietnam, LIKE SHE DO, and the U.S. ambassador to Vietnam, Ted Osius, was like "Hey Justice G!" and she said, "BRUNCH, NOW." Osius was all, "Of course we will, but I am a gay and I would like to renew my gay marriage to my husband Clayton Bond!" Ginsburg said, "I will renew your gay marriage to Clayton Bond, for he is a fine fellow, and you are married to him, and then we will go to brunch."

U.S. Supreme Court Justice Ruth Bader Ginsburg on Aug. 8 presided over the ceremony during which gay U.S. Ambassador to Vietnam Ted Osius and his husband renewed their wedding vows. The private ceremony took place at Osius’ official residence in Hanoi. [...]

The two men nevertheless did not know Ginsburg until she arrived in Vietnam earlier this month on a trip sponsored by the State Department’s U.S. Speaker Program where she met with Vietnamese Prime Minister Nguyen Tan Dung, Chief Justice of the Supreme People’s Court Truong Hoa Binh and other senior officials from the Southeast Asian country.

That's right, they didn't even KNOW each other before. Justice Ginsburg is such a super gay supporter she goes looking for gay marrieds in southeast Asian nations, just because she can. And she got to stay at their house, where they probably stayed up late talking about who's sexing who on the Supreme Court while the babbies slept.

Babbies, you say? Yes, the happy gayly renewed couple has babbies and OH THEY ARE CUTE:

And here is Ginsburg making goo-goo faces at one of the babbies, while she gets her drank on, because you know she does that:

No grown-up Supreme Court juice for you!

And they all lived happily ever after, in a renewed gay kind of way, Amen.