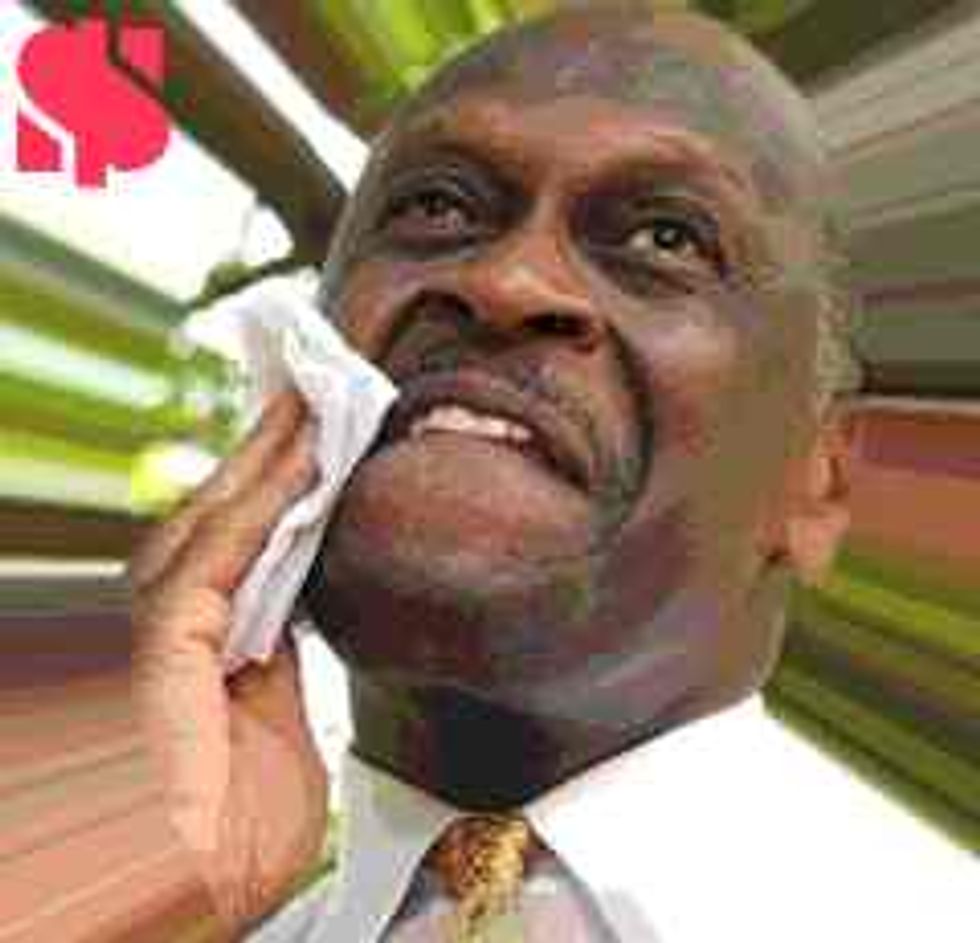 When you're a multimillionaire executive with important responsibilities like serving up dangerously unhealthy anusburger pizza pie to obese chain-smoking Americans, there's always some tramp yelling about how you hurt her feelings or sexually harassed her or whatever, because the little people are always nipping at the heels of the Important People. This is Herman Cain's latest version of why he has to constantly pay off the ladies because he keeps trying to make sexytime on them, which they should just shut up and accept, because he is an Important Executive. God, women are such complainers.

Herman Cain is a shit-food merchant who is best known for shutting down half of the Godfather's Pizza chain restaurants and putting all those employees out of work, and ruining lives, etc. This is how you become a "Job Creator" in America, by laying off as many people as possible so your major stockholders can "trickle down" a little of the dividend or whatever, maybe to buy a new sex slave from the Philippines. But in the course of Job Creation, sometimes an Important Executive comes across a nobody lady employee who might be attractive. In this case, it is both acceptable and admirable for the Job Creation Executive to sexually harass the lady. And if the lady sues because she doesn't know to respect her betters, then paying off the tramp is just the "cost of doing business." This is how CNN explains the complex issue to Dumb Americans who don't understand the importance of Wall Street Executives.

When it comes to the bottom line, there are a few reasons that an employer might pay to sweep sexual harassment allegations under the rug instead of fighting them in the courtroom or the court of public opinion. Legal costs and damage control top the list, employment attorneys and workplace policy experts say. Even if the allegations seem baseless, it's the cost of doing business, a quick fix to shield an employer from further allegations, boycotts or worse. But, on the flipside, settlements come with the risk of enabling someone to reoffend.

GOP presidential contender Herman Cain finds himself addressing allegations of inappropriate behavior, made by two former female employees of the National Restaurant Association when he led the organization in the 1990s. Cain said he was falsely accused and that a thorough investigation found the claims had no basis. He acknowledged Monday night that there was a settlement, contradicting a statement earlier in the day in which he said he had no knowledge of a settlement.

So, the pretend story today is that Herman Cain -- who was never going to get the GOP nomination, ever -- keeps changing his story about the ladies and the inappropriate behavior and the lawsuits and the secret settlements. But the real story is that the 99% just doesn't understand the important and complicated lives of the Rich and Powerful. Come on, Americans! Let's come together and start worshiping job-killing sociopaths in the executive suites again! The 1980s are Back to the Future! [CNN/CBS]