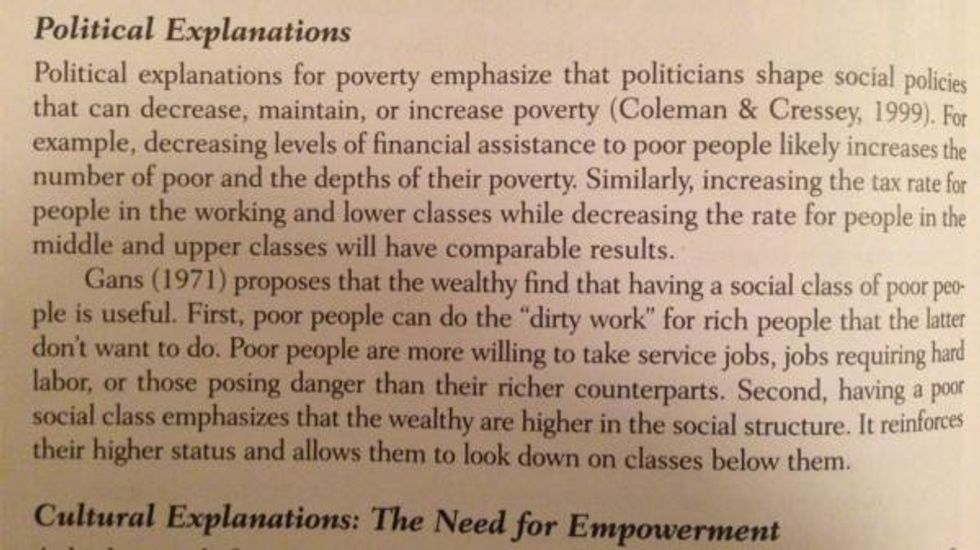 Just in case you missed it, we have yet another tale of Liberal Extremism in Our TAXPAYER-SUPPORTED Universities. The most recent butthurt concerns the outrageous, unthinkable claim in a social work textbook that -- hope you're sitting down, folks -- Ronald Reagan was not much of an advocate for women. More specifically, the furor started with one brave sophomore at the University of South Carolina, Anna Chapman, who was so outraged by passages in her Social Work textbook, Introduction to Social Work & Social Welfare: Critical Thinking Perspectives, by Karen K. Kirst-Ashman, that she just had to share them with the "liberal bias watchdog" website Campus Reform, a conservative "youth" organization from 74-year-old rightwing activist Morton Blackwell's "Leadership Institute." So what horrible things does the book say about Reagan?

"Reagan...ascribed to women ‘primarily domestic functions’ and failed to appoint many women to significant positions of power during his presidency."

Even worse, the book cited scholarly works that suggested that conservatives often

"‘tend to take a basically pessimistic view of human nature. People are conceived of as being, self-centered, lazy and incapable of true charity.'"

Shock and outrage abounded, from Dead Breitbart's Home for Endless Pissflap-Running (which misspells Kirst-Ashman's name throughout) to Glenn Beck's Internet Pearl Clutchatorium and Rupert Murdoch's Whine Channel. Pouting and much sadness at the injustice of it all commenced, and the Right had a brand new 19-year-old hero, Anna Chapman, who pointed out that Reagan actually appointed several important women, and more importantly, loved America.

On Fox, Chapman said that the book's characterization of conservatives hurt her fee-fees so much that she "was tempted to throw the book away,” which seems like a perfectly natural reaction to a textbook that says things you disagree with.

“The way it describes conservatives as viewing people as “lazy, corrupt, and incapable of true charity” is extremely offensive and beyond not true, granted the fact that conservatives believe that people are capable of succeeding without government interference,” added Chapman, who is secretary of the school's College Republicans. "I come from a middle class, conservative family, with extremely giving parents, so it really hit home for me.”

Heaven knows, we have never seen a Fox News report that suggested that people are essentially lazy or corrupt -- except of course, every time Fox discusses food stamp recipients. And how could anyone think that conservatives take a pessimistic view of human nature, unless of course they read conservative Christian textbooks that emphasize "man's sin nature" and the impossibility of human reason to ever make the world better?

Happily, Chapman got to go on Megyn Kelly's show, along with Alex Smith, the head of College Republicans, so they could talk about how conservatives, despite their belief in being rugged individuals, are in fact the greatest victims of all at liberal colleges.

The teaser for the segment said, "You won't believe what children are being taught about Ronald Reagan" -- an interesting view of the poor little tykes in universities.

Kelly shared Chapman's outrage at the notion -- again, presented as the author's own view, not a paraphrase of another researcher's idea -- that "the wealthy find that having a social class of poor people is useful." Gosh, if you look at the actual page from the book, it's pretty clear that this is a theory under discussion, not a statement of absolute fact:

You can tell that this is another person's idea from the phrase "Gans (1971) proposes that the wealthy..." Still, it's pretty obvious that such ideas must not even be paraphrased.

But Megyn Kelly wanted to know what sort of monster would even choose a textbook that included such terrible thoughts?

Kelly: "Who is this professor?"

Chapman: "Well, it wasn't really about the professor. It was more about the textbook and the fact that we were required to read it."

Kelly: "Does the professor stand behind this? Does she get up in class and say, 'Shhhh, they're bad and conservative?'"

Chapman: "She did not denounce this, which was something -- I was the only person to speak out about this, which is another thing that concerned me. I felt that if I wasn't in this class -- you know, would these kids really be buying it?"

So, OK, you read something in the textbook, the professor didn't actually lecture about it in class, but she also failed to "denounce" it. Happily, Chapman was there to protect her fellow students from those lies. And yet, even though the university said that it encouraged students to vigorously debate ideas, this too is more liberal brainwashing, because the book is still required reading and the professor has not been fired. (Surprisingly, the prof's name doesn't appear to have exploded across the wingnuttosphere -- how will anyone know whom to make death threats against without that vital information?)

Incidentally, it might be worth mentioning that the textbook is not primarily about Ronald Reagan or conservatism -- here's the table of contents:

Looks like it's just one lie after another, suggesting that social work has something to do with helping a bunch of specific victim classes, most likely by telling them to blame Reagan for all their problems. But is there even a chapter on "Social Work and Services for Butthurt Conservatives"? There is not.

And here is a bonus vid, because why not.

America, we rest our case. Most outrageous thing, ever. Until whatever shows up on Fox tonight.