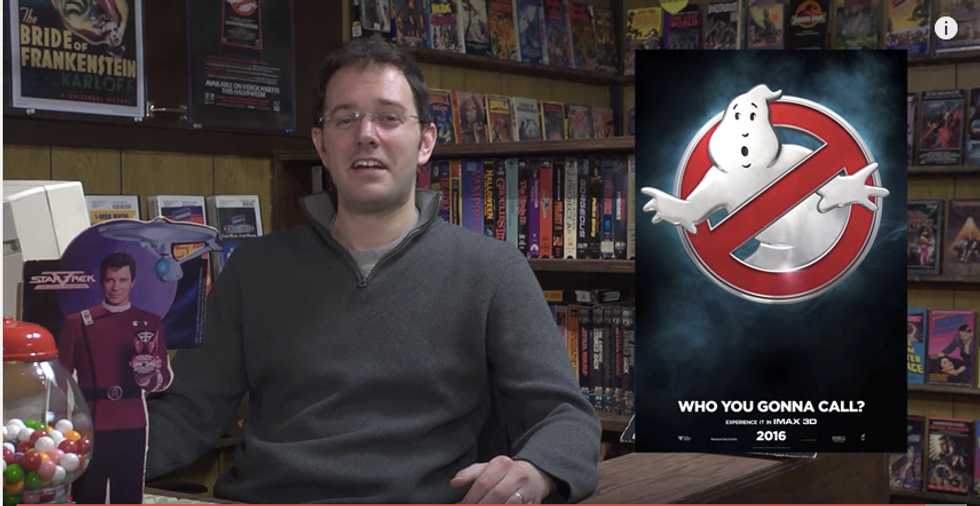 Donald Trump was also not happy about the movie, probably because it is all about ladies who fight ghosts WHILE ON THEIR PERIODS.

I am very much in favor of this movie, and intend to see it as soon as possible, because I am a mean lady person who loves to see things ruined for men. Also because Kristen Wiig is awesome and (TRUE STORY) we went to the same high school and probably would have been BFFs had we been there at the same time.

But you know who will NOT see this movie? James Rolfe, the "Angry Video Game Nerd," who lives inside a 1980s video store for some reason. What he will do, however, is review the TRAILER for the movie. Which he hates, clearly, for non-OH MY GOD IT STARS ALL LADIES reasons.

Rolfe has IDEAS about how a Ghostbusters reboot could have happened and been good, but this version is NOT it. Especially because it is just called "Ghostbusters" like the original movie was, instead of "Ghostbusters: The Next Generation" or something, which means he now has to inconveniently refer to the ORIGINAL Ghostbusters movie as Ghostbusters 1984. Which is just CRUEL. He is also very concerned that the kids of today may not even have SEEN the original Ghostbusters, and will think this evil Lady Ghostbusters is the only Ghostbusters there is. He explains that other reboots have been good, like Star Trek and Star Wars, because they RESPECTED the originals.

I must tell you, though, that this video has inspired me! In two ways, actually. First, I now really want to do a remake of every Quentin Tarantino film BUT WITH ALL LADIES. And also write the script for The Godmother, starring only Diane Keaton. Basically I want to take every movie that the mens hold dear and recast it with women. Women that they may not even want to have sex with.

The second way it has inspired me is that I have decided to review a film *I* have never really seen, but assume is stupid and boring based on what I know of it. And that film, my friends, is STAR WARS:

I hope you all enjoy this review, because I am not so good at this video stuff and it took me basically ALL OF YESTERDAY AFTERNOON to crap that out.

**EDIT** Previously referred to the angry nerd dude in the video as Mike Matei, rather than James Rolfe... because it literally SAID Mike Matei underneath the video. Probably if they want to be referred to by their correct names, they should put those names under their videos.