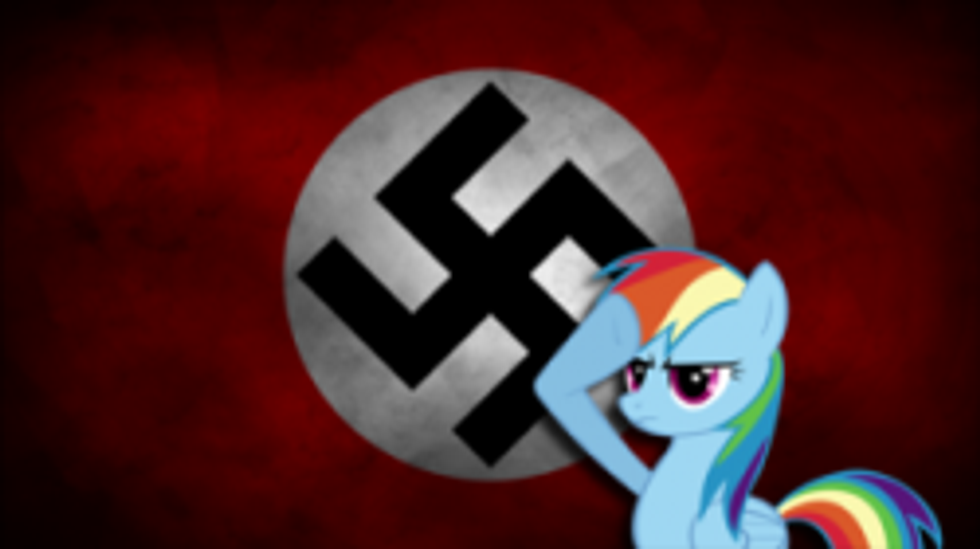 So, we mentioneda little earlier today that an Illinois elementary school had a sheriff's deputy assigned to guard it after a parent "complained children weren't reciting the Pledge of Allegiance correctly," right? So, please join us in doing a bad Paul Harvey imitation as Wonkette presents The Rest Of The Story. Yes, you DO have to say that out loud, Americans!

It turns out that Colin McGroarty, a parent who was volunteering at Mill Creek Elementary School in Geneva, Illinois, was very, VERY unhappy when he heard kindergartners reciting the Pledge of Allegiance in the library, because of what he perceived to be a Marxist Nazi Islamofascist rewrite of the Pledge. No, it's not that they left "under God" out. It's that he heard some words that he was damned sure didn't belong in there, and then went apeshit. Or as an email to parents from Principal George Petmezas very diplomatically put it, McGroarty resorted to language "that is not typically heard in an elementary school setting."

McGroarty calmed down eventually and went home, and then sent an angry email to the school and to a number of parents, and for good measure, posted it on Facebook. The email, which prompted the Sheriff's Department to send a deputy to Mill Creek Elementary on Thursday, complained that the word "liberty" was left out of the Pledge (Petmezas insists it was not) and that the Pledge had been corrupted by inserting a student promise to "obey all rules and commands of teachers." Which gets us to what REALLY happened. Petmezas's email explains that after students say the Pledge (in its full and unedited form, just like the Constitution, George Washington, and Jesus demand), the children follow it with a recitation of the "school creed," which is where that scary language about submitting to every whim of the Marxist Overlords comes from.

You guys are never going to believe the horrible, anti-American, Obama-worship-song lyrics contained in that school creed. The weaker among you may wish to take laudanum to calm your nerves before you read it.

In order to develop good citizens,

We believe that every person should

It's been a while since we lulled an infant Kid Zoom to sleep with it, but we are pretty sure we recognize these as lines from Mao's Little Red Book.

Mr. McGroarty's email is best read aloud in a voice that summons the insane eye-rolling of a Howard Beale, but with a bit of the sniffy self-righteousness of a Keith Olbermann:

I WILL NOT stand for my children standing in front of the flag, hand on heart, reciting a corrupted Pledge of Allegiance that leaves out "liberty" and has students stating they will obey all rules and commands of teachers. I witnessed this first hand today and am ashamed. You are teaching fascism plain and simple. My children will not grow up as blind followers who don't think for themselves.

I can think of no reason for having a separate pledge for kindergarteners and first graders then indoctrination of the young. Not going to happen on my watch. I've shed blood for this Country and will do so again if necessary.

My mother spent 12 years in a prison camp. I'm NOT ALLOWING you to introduce a Nazi way of life into the USA.

Yes, he really does include his qualifications as a "Microsoft Certified Solutions Expert" as part of his signature line.

And if those three anodyne lines about being nice and getting along drive Mr. McGroarty to fulminate about how much he just hates these Illinois nazis in the schools, we hope that he never drives his 1974 Dodge Monaco anywhere near a Boy Scout parade, lest he hear them recite their treasonous oath, which not only pledges slavish obedience, but also the dicey notion of "duty" and a socialist commitment to "help other people at all times."

Of course, nobody says THAT is fascist. It's just that the organization itself is kind of fascist, what with the not letting children be gay or hate god. The Boy Scouts better keep an eye out for Colin M. McGroarty MBA, MCSE, because he is not in a mood to let anyone force that Nazi indoctrination shit on kids.