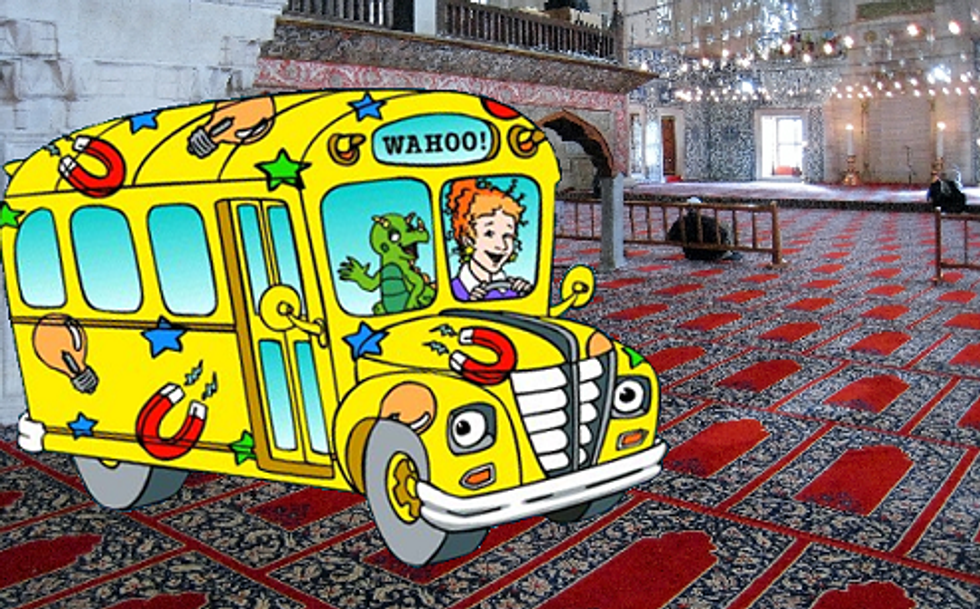 A blow for freedom has been struck! Students in Hendersonville, Tennessee, have beensaved from the grip of sharia law, and it's all thanks to alert parents who complained when they found out that an elective World Cultures honors course would be taking a field trip to a Hindu temple and a mosque. Outrage! Horror! The class studies five world religions, but the field trip only visited two houses of worship, one of which is actively trying to take over U.S. America! Concerned step-parent Mike Conner said, "If we as parents don’t begin speaking up, no one will." How true this is. Thankfully, the wingnuttosphere has raised such a fuss about the threat of honors students learning something about Islam in a unit on world religions that the school has done the only responsible thing, and cancelled the field trip. Talk about a close call!

The Tennessean has the terrifying details of the school's pro-Islam agenda:

The honors course – which is an elective – has been offered by Hendersonville High for a decade. The curriculum includes world religions, and students spend three weeks on that topic, learning about Christianity, Judaism, Buddhism, Hinduism and Islam, said school system spokesman Jeremy Johnson. In the past, the students have typically visited a Jewish synagogue, a Hindu temple and a Muslim mosque without parental complaints.

To make matters worse, potential WND columnist or Fox News commenter Mike Conner told the paper that when his stepdaughter opted out of the field trip, she was given a written assignment that asked her to compare and contrast the religious teachings of Jesus, Gandhi, and Mohammed. BUT!!!! The teacher gave the poor girl only a single page of Bible verses, 2/3 of a page

about Gandhi, and five pages on Islam. Obviously, the teacher is in league with the Muslim Brotherhood. The tale becomes even more sinister:

When his stepdaughter decided she could not compare and contrast the three because she was given unequal information, she was initially told that she would receive a zero and would not be given another assignment, Conner said. That’s when he really became upset. However, school officials later agreed to give a second alternative assignment.

That assignment was to choose three of the five religions and compare and contrast them. Conner wonders why his stepdaughter wasn’t given that option in the first place.

We are pretty sure that the teacher also absolutely forbade the girl from supplementing the materials given to her with her own research, because that's just how these "honors" classes usually work.

Conner said other students who attended the Sept. 4 field trip told him copies of the Quran were given to students, who also participated in meditation in the Hindu temple. The school system’s spokesman said materials were handed out at the mosque but he wasn’t sure if they included Qurans, and a tour guide demonstrated how Hindu meditation is achieved but students were not required to participate.

Conner also said that he wouldn't mind so much if all five religions got equal time, probably down to the minute, but was very, VERY concerned that the field trips only included two religions.

“If you can’t share equal time to all five, you shouldn’t do any of them,” he said.

And of course, it doesn't appear that anyone suggested adding three more field trips, because money.

And now for the money quote:

Conner believes that between the trips and the assignment, the school was promoting the Islamic faith.

“The teacher was pushing Islamic tolerance,” Conner said. “We did not want to make this about religion -- they forced us to.”

Keep an eye on this Mike Conner guy's career as a "concerned parent" activist and wingnut media darling, because his star is definitely on the rise -- but unaccompanied by a crescent moon, thank you very much!